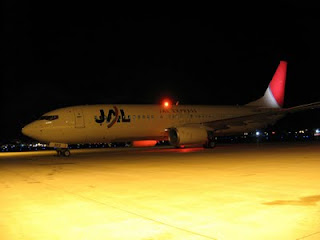 A few months ago, JAL decided to route the 738 deliveries through ANC instead of HNL. Only a couple of 738 have been delivered through ANC since the decision was made, so it was unexpected to find out that this one was coming to HNL. As for future deliveries, we'll have to see which way they are routed.
Posted by hal763 at 23:15

Maybe it is do to weather up in ANC.