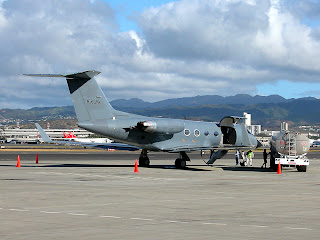 Completing today's HNL RareBird Grand Slam is a Gulfstream III, N163PA (msn 249) operated by the Phoenix Air Group. The rarity of this bird is the starboard side cargo door. This G-III previously served with the Royal Danish Air Force. This flight arrived from ONT (Ontario, CA), re-fueled, and returned to ONT.

Gulfstream G-IVs (C-20G) in service with the US Navy and US Marine Corps have the same cargo door, including the ones based here in Hawai‘i.
Posted by Blue Wave 707 at 10:21