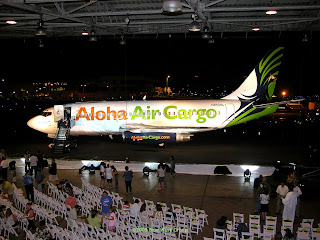 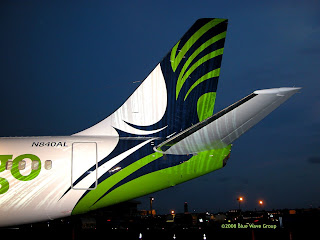 Adhering to a request from Aloha Air Cargo (KH/AAH), here are two shots I got from the official unveiling on October 15th.

N840AL (c/n 23124), a 737-2X6C, was named "Ho‘omaka‘ana Hou" (Hawaiian for "New Beginning") was unveiled to Aloha Air Cargo employees, family, business partners, and the media in a gala presentation set in the KH hangar. The new colors also represents a new corporate identity for the cargo division of the former Aloha Airlines (AQ).

Does anyone know how much longer these airframes are expected to last? As lovely as they are, I am sure that their cycle count is well above the Boeing design number (just as the pax planes were).

Surely the company has plans to replace them somewhere down the line, I just have not seen anything in the press regarding that.