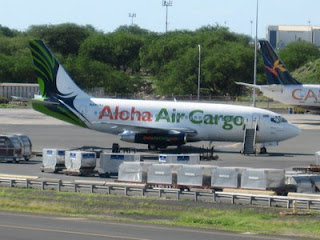 The next Aloha Air Cargo painted in the new livery is N841AL, a 737-2X6. This aircraft was aquired by the former Aloha Airlines from Alaska Airlines back in 2007, as reported on this blog in June 2007. The aircraft started service in 1984 with MarkAir and then went to Alaska in 1994.