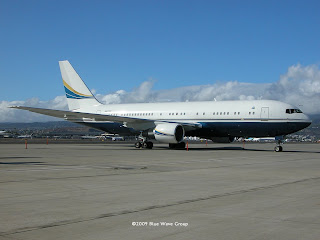 N673BF began as a Qantas airliner, registered as VH-EAN, and delivered in May 1986. VH-EAN was withdrawn from its service with Qantas in June 2004. It was taken up by WLD, re-registered as N773WD, and stored at MHV (Mojave, CA). In November 2006, the Wilmington Trust Company acquired ownership of the 762, and re-registered it as N673BF. It is unknown who uses the jet, but has been speculated that it's leased by Google. 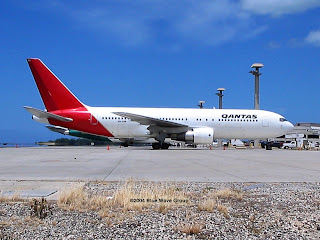 On its way to MHV, VH-EAN made a stop at HNL from its flight from SYD in July 2004 (five years ago!?!). I got this shot as VH-EAN rested on the north ramp hardstands. Note the kangaroo tail logo was painted over but retained the Qantas titles.
Posted by Blue Wave 707 at 18:00

It actually arrived from SBA ...

It is not leased by Google, Google have its own 767 this is VIP private.

It is parked at Newark today. Could it be leased by a pro sports team or Big East college team?