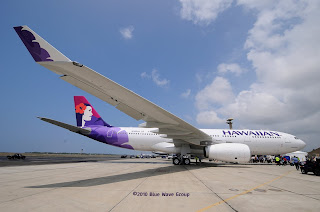 "Makali‘i", Hawaiian Airlines first Airbus A330-243, N380HA (msn 1104), made its debut at HNL today on its delivery flight home as HAL9971. The brand new Airbus made a low pass fly-by over Runway 8L, before landing on the same runway several minutes later, and greeted with a water cannon salute.

*Update*
The aircraft is now parked at the new maintenance area being built next to the ARFF station at the end of Elliott St.
Posted by Blue Wave 707 at 12:49

Is this going to be on the North Hard Stand for awhile, or will it be moving to the inter-island ramp?

It is now parked at the new maintenance ramp and hangar they are building by ARFF station 1. The wing span is too big for taxiways G and L.

any ETA on the completion of the new hangar? also, what will the accommodations be like? IE, bay space, and ramp parking?

Yay!!! New plane.. can't wait to see how much of the cost for these new aircraft will be passed on to the flying public! Good luck on financing all these new FRENCH Airbuses...

A couple of us in the media wished that the Konas could've got stronger to shift traffic so that Makali‘i made its pass & landed on Rwy 26R, then we would've got to see the A330 touch down ... oh well. At least, we were blessed with no rain. :-)