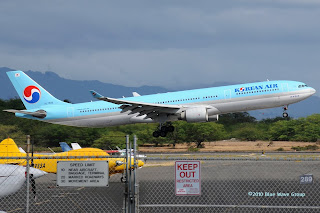 Korean Airlines announced that they are adding a second flight from ICN to serve HNL. The flights will operate on Tuesdays, Thursdays, and Saturdays. Beginning Saturday, June 12, KAL53 will arrive at HNL at 2345HST, then depart for ICN as KAL54 at 0140HST. Like the regular ICN-HNL flight (KAL51/52), the new KE flights will be operated with their Airbus A330-323Xs, which will add 888 more seats per week.