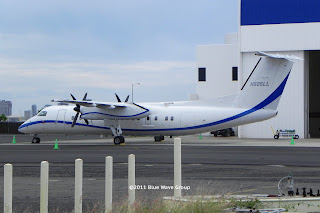 N505LL (msn 415), a Dash8-315B, owned by the Path Corporation (Rehoboth Beach, DE), is making a tech stop at HNL.
The Dash8 was originally delivered to Saeaga Airlines (Malaysia) as 9M-EKA in 1995. In 1998, it was acquired by the Executive Aircraft Corporation as N600SR. In 1999, the Path Corp acquired the Dash8, and re-registered it as the current N505LL.
In June 2006, N505LL made a stop here as well, parking on the Bradley Pacific Ramp. As it was noted in that post, the Path Corp has been linked to the US's Central Intelligence Agency (CIA).  It's also been noted on airliner forums that N505LL has added antennae to the crown of the fuselage (see above).
Posted by Blue Wave 707 at 13:08