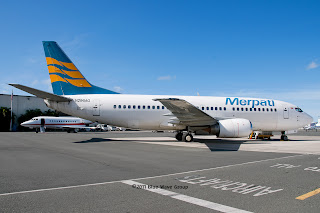 A 737-3Q8, registered as N296AG (c/n 26296, l/n 2581), owned by ACG Acquisitions (Aviation Capital Group, Newport Beach, CA), arrived from CGK (via MNL, GUM, and MAJ) early this morning. N296AG left for VCV (via OAK) later in the day.
26296 was originally purchased by ILFC, and leased to Hainan Airlines in February 1994. It was registered as B-2938, and was painted in the "Yellow Flowers" special livery. In 2007, it was transferred to Hainan's China West Air subsidiary (PN/CHB), and maintained the special livery. In September 2009, ACG acquired 26296 from ILFC, and leased it to Merpati Nusantara Airlines (MZ/MNA) two months later, registered as PK-MDG. With its lease expired, 26296 is headed back to the mainland.

Pictured above is N296AG parked on the AirService Hawaii ramp, still wearing its Merpati colors.
Posted by Blue Wave 707 at 07:04