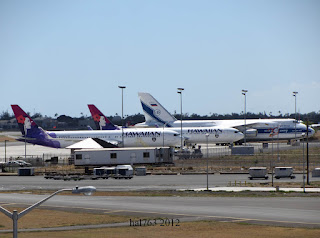 Earlier, we posted that Hawaiian will be transporting the Oakland Raiders on their road games, and applied the Raiders decal to N588HA. Well, a second 767-300ER has had the Raiders decal applied as well. As seen in the picture, both aircraft were parked next to each other on the ‘Ewa hardstands. The 767 in the front is N588HA. It looks like the second aircraft is N587HA.