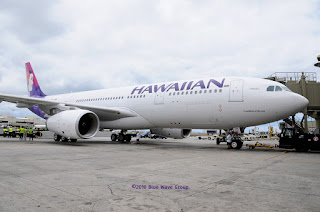 Hawaiian Airlines announced early this morning, that they plan to launch thrice-weekly non-stop A330-243 service between HNL and TPE in July 2013. This would be the only non-stop flight between the two destinations, since China Airlines has discontinued their non-stop TPE-HNL (CAL2/1) flight two years ago.

Currently, the only service between HNL and TPE is the daily one-stop flight offered by China Airlines (CAL18/17), that stops at NRT.

Further information in this Hawaiian Airlines press release.
Posted by Blue Wave 707 at 08:35