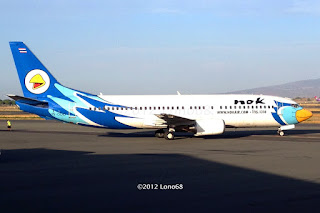 Nok Air [DD/NOK] is returning one of their 737-4Y0s leased from GECAS, HS-DDO (c/n 26081, l/n 2442), is seen above, taxiing out from the Bradley Pacific Aviation ramp. It's returning to the mainland, destination unknown, and will be re-registered as N291CS later on.

26081 was originally purchased by Guinness Peat Aviation (GPA) in March 1993, then leased to AirBerlin [AB/BER] as D-ABAF. BER sub-leased it to Pegasus Airlines [PC/PGT] during its time, as TC-AFU. Philippine Airlines was the next lessee as EI-CVP in February 2001. GPA sold 26081 to GECAS in 2006. Ukraine International Airlines [PS/AUI] was the next lessee in February 2006, and registered as UR-GAR. Nok Air began its lease from December 2010.

Saw an unusual contrail passing over KSAN at 1510 today, 8 Dec. Plane finder app says its Nok 6600. Thought that was weird so googled it and found this link. Not sure where it's headed but sure wish it hasn't passed over at FL380. I check your site frequently, keep up the good work.