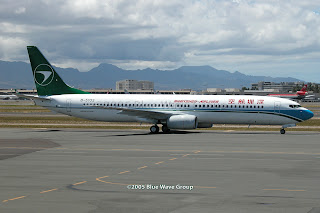 One distinguishing feature that differentiates a -900 from a -900ER, as in the above photo, is that there is no exit door between the aft door the overwing pop-up escapes.
Posted by Blue Wave 707 at 09:00