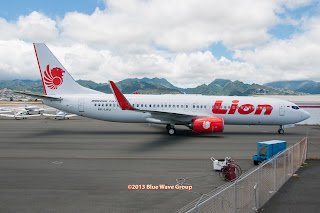 Lion Airlines is taking delivery of PK-LKU (c/n 38691, l/n 4514) today. The 737-8GP is making its delivery flight from BFI as LNI1, and will make its brief fuel stop this afternoon at HNL, before continuing onto MAJ. Normally, their third segment of their delivery flight is routed MAJ-BIK, but today's third segment is routed from MAJ to CEB [Mactan-Cebu International Airport, Lapu Lapu City, Cebu Island, Philippines].

38691 was originally registered as PK-LLH, but with allocations to subsidiaries Batik Air and Malindo Air, Lion has been using older registrations that were given to its allocations.
Posted by Blue Wave 707 at 07:43