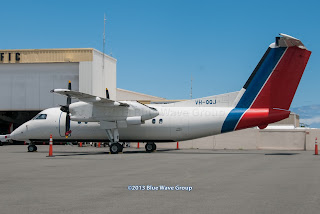 A former Skytrans Airlines [NP/SKP] (Australia) Dash8-102A, VH-QQJ (msn 392), is making its ferry flight from Australia to the US mainland, and has stopped off at HNL. The flight originated from CNS (Cairns International Airport, Cairns, Queensland, Australia) on June 26th, and made its first stop at MAJ.

This Dash8-102A was once sister ships with Island Air's N829EX, which was recently withdrawn from service.
Posted by Blue Wave 707 at 13:59