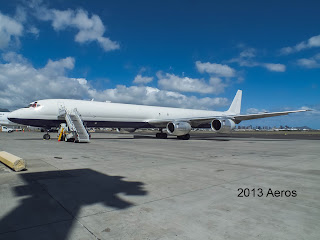 Nearly half a century old, this DC-8-73CF if still going strong. N807DH (c/n 45990, l/n 375) arrived from Victorville, CA this afternoon. This DC-8-73CF is one of two recently acquired by Skybus Jet Cargo, a new start-up cargo carrier based out of Las Vegas, Nevada.

45990 was originally delivered as a DC-8-63CF (powered by 4 Pratt and Whitney JT3D-7s) , to Flying Tiger Line in July '68, as N780FT. In June '77, it then was acquired by Cargolux Airlines International and re-registered as TF-CCV. In April, '83, it was leased to Air India and was returned in November of the same year. Evergreen International was the next carrier to lease 45990 in January '84 and was bought by Evergreen International in July of the same year. The following January, Evergreen International had it's registration changed from TF-CCV to N816EV, and was modified to become a DC-8-73CF (powered by 4 CFM56-2C1s). Air India leased 45990 again in July '85 - May '86 and January - November '88. It was then leased from Evergreen to TNT Airways in July '92 - March '94. UPS then leased it in April '94 and three months later it became N816UP. Sometime during the lease with UPS, 45990 was purchased by DHL Worldwide Express and became N807DH in June '96. In June '03, 45990 went to Astar Air Cargo and operated on the behalf of DHL Worldwide Express until their contract was terminated in June '12. It was sent to Kingman, Arizona for storage soon after. In January '13, it was bought by Aerotradex and sold to Transpacific Heavylift Inc. three months later. The connection between Transpacific Heavylift and Skybus Jet Cargo is unclear at the time of this posting.
Posted by Aeros at 20:06

According to FlightRadar24, it left today (08/18) to AYPY, Port Moresby Airport.

That's kind of a rare sight in HNL isn't it? Beautiful airplane for sure.

Leased to us at POM Heavylift PNG. we thank you all for the interest

Operated and managed by Peruvian Airlines / Aerolineas Peruanas as OB-2059P. On ACMI wet lease to HeavyLift Cargo in PNG.... HeavyLift #3

Was a solid aircraft when I sat the seat.