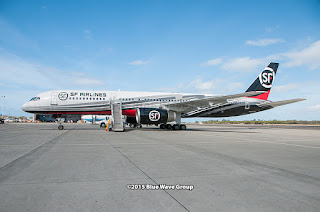 27621 was originally purchased by ILFC, and leased to Flying Colours Airlines [MT/FCL] (United Kingdom) in February 1997 as G-FCLA. In March 2000, G-FCLA was transferred to JMC Airlines [MT/JMC], and in March 2003, Thomas Cook Airlines [MT/TCX] consolidated its airlines and fleets. G-FCLA was also subleased to Skyservice Airlines [5G/SSV] (Canada) twice, as G-FFLA; and Jazz Air as C-GJZV. Thomas Cook Airlines returned G-FCLA to ILFC in April 2012, but leased from new lessor AerCap until November 2014. It was stored at QLA [Lasham Airport, Lasham, UK], where it was painted in the SF Airlines livery in January 2015. This past April, it was sold to WFBN, where it was stored at XSP.
Posted by Blue Wave 707 at 22:51