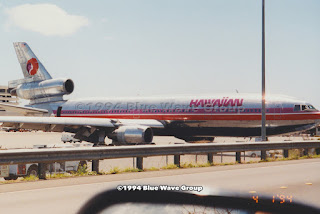 N122AA was originally delivered to American Airlines in September 1972. It was delivered to Hawaiian in March 1994, and remained until February 2001. American sold N122AA to FedEx in May 2001, supposed to be registered as N551FE, but was instead sold to ECS Refining for parts, and eventually scrapped at MHV in 2002.
Posted by Blue Wave 707 at 10:10