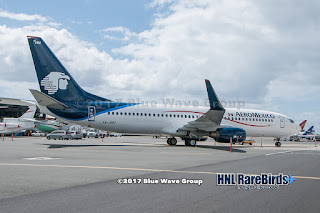 Aeroméxico [AM/AMX] is taking delivery of XA-AMZ (c/n 29927, l/n 727), as it ferries from NRT to TIJ [Generál Albelardo L Rodriguez International Airport, Tijuana, Baja California, México] as AMX8546. The 737-8AS, leased from Aircastle, made a non-stop flight from NRT to HNL for its first leg.

29927 was originally delivered to Ryanair in December 2000 as EI-CSN. In February 2009, it was acquired by CIT Leasing, then leased to Garuda Indonesia as PK-GEL. In 2012, 29927 was sold to Aircastle, and continued with Garuda, then withdrawn from service in November 2016. It's was painted at CGK into the Aeroméxico livery this past January.
Posted by Blue Wave 707 at 09:24