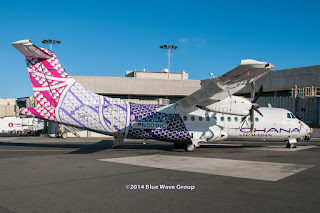 This acquisition, subject to approval by the US Bankruptcy Court on a hearing on January 5, 2018, will allow Hawaiian's subsidiary ‘Ohana by Hawaiian to operate on its own certificate. Currently, ‘Ohana is operated by Empire Airlines' pilots, flight attendants, and ground crews, under a contract when the subsidiary was announced; and also flies under Empire's flight code. It will mean that ‘Ohana will hire its own employees, and could mean that former Island Air employees could return to work for ‘Ohana. Hawaiian Airlines also created a new subsidiary, Elliott Street Holdings for the acquisition of Island Air's assets. ‘Ohana by Hawaiian presently has three ATR42-500s for its passenger operations, and three ATR72-200Fs for its yet-to-begin cargo operations. The airline has not stated if more ATR42s will be added to the fleet.

Further information in this Honolulu Star*Advertiser article.
Posted by Blue Wave 707 at 17:40