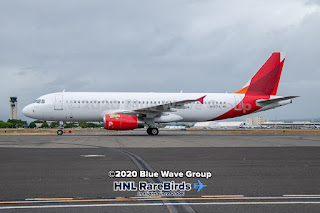 3378 was originally delivered to TACA International in January 2008 as N497TA. When Avianca merged with TACA International, the latter's fleet was transferred. N497TA was allocated to Avianca El Salvador in May 2013. It was withdrawn from service in September 2019, and stored at GYR a month later. It was sold to UMB Bank in December 2019.
Posted by Blue Wave 707 at 12:00