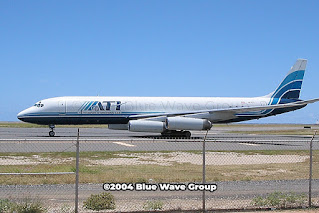 Our September edition of "HNL RareBirds Classic" goes back to November 2004, with Air Transport International's DC-8-62H-CF, N71CX (c/n 45961, l/n 361), seen above on Taxiway RT. The ATI DC-8-62H-CFs were the backbone of their military charter service to AWK [Wake Island Airfield, WQ] and SUU [Travis AFB, Fairfield , CA] up until 2013, when 757-200Cs took over.
45961 was originally delivered to Alitalia Cargo System in June 1968 as I-DIWQ "Ciclope", it was also painted in the 1970s livery, and flew with them until June 1981. Sea & Sun Aviation purchased this DC-8 for Flying Tiger Line as N3931A. In 1986, it also flew for Air Cargo Spain. In June 1987, IAC Leasing Corporation purchased N3931A, and leased it to Hawaiian Airlines. Three months later, it was sold to First Security Bank of Utah, lease transferred, until February 1993. Hawaiian had the interior configured for 204 passengers. Later that October, it was sold to Trans American Express, and leased to Advance Air Charters as C-FHAA "The Spirit of Calgary". In November 1995, this DC-8 was acquired by Kalitta American International Airways, and re-registered as N818CK three months later. In February 1999, it was transferred to their Kitty Hawk International subsidiary for 15 months. ATI purchased this DC-8 in March 2003, registered as N71CX, and configured the interior to a combi (with 32 seats in the aft section).  In December 2009, it was sold to Cargo Aircraft Management (ATI's parent company), and leased back. It flew with ATI until January 2013. Sadly, N71CX was scrapped at MHV in April 2014.
Posted by Blue Wave 707 at 08:00