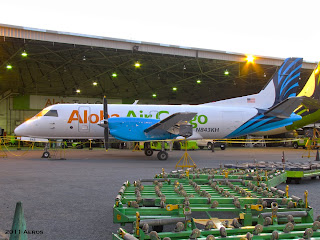 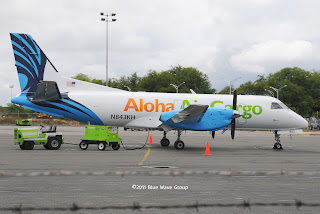 Aloha Air Cargo's first Saab SF340AF is due to arrive today from ROW (via HII). It is the first of two SF340BFs that will fly cargo to smaller Hawai‘i airports, and supplement their three 737-200Cs. N843KH (msn 340A-046), is the first SF340AF to arrive from ROW. A second SF340AF is expected in late summer.
340A-046 was originally delivered to Express Airlines I as N323PX in March 1986. It then went to Mesaba Airlines in August 1997. It was converted to a freighter and re-registered as N46XJ while with Mesaba, then acquired by Saint-Ex Cargo (Mexico) in January 2007. It received a Mexican registry of XA-STX. In March 2010, it was stored at ROW.
Mahalo to team member Aeros for the top photo. Note the addition of the bright blue variation in place of the lime green on the Saab's livery.
Posted by Blue Wave 707 at 17:58

Looks nice in those colors. How much payload can it haul?