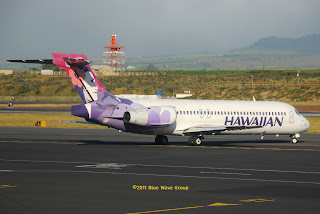 Hawaiian Airlines has leased three more Boeing 717-200s from Boeing Capital Corporation, with the first model to be delivered in September. With the addition of the three 717s, it will increase Hawaiian's inter-island service by 20 flights, beginning in October. This move brings the airlines' 717 fleet count to 18.

It has not been announced where these 717s are coming from, though VCV currently has several in storage. Boeing Capital has had 20 MexicanaClick (QA/CBE) models in storage since the shutdown of the Mexican carrier in August 2010.
On a related note, Hawaiian also completed the purchase of their existing fleet of 15 717-200s, which will help in the airline in the long-term.