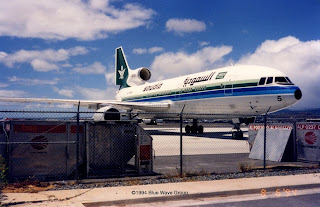 Dating back to 1994, is today's HNL RareBird Classic, a Saudi Arabian Royal Flight L-1011-385-3 "TriStar 500", HZ-HM5 (msn 193G-1250). This TriStar was used by the Royal Saudi Family, and it spent several days on the HNL south ramp. It's seen above wearing the classic Saudia (SV/SVA) colors, and has been re-painted in the current colors.

The SV rustbuckets I used to take out of AHB never looked this good. But it does remind me of the taste of the green arabic coffee and almond stuffed dates they served onboard.