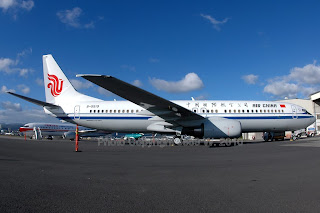 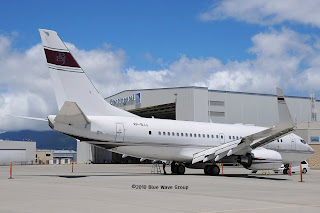 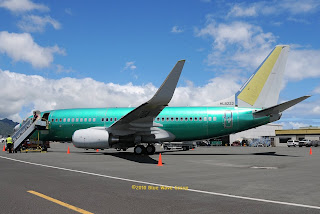 An unpainted Korean Airlines 737-7B5 BBJ, HL8222 (c/n 37660), arrived at HNL today from LAX as KAL18P. Still wearing the protective green layer over the bare aluminum skin made the flight, which is probably headed to South Korea. HL8222 had a previous registration N719V. 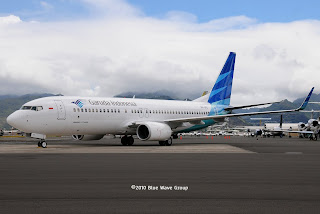 PK-GFC is seen above on the AirService Hawai‘i ramp awaiting its next flight to MAJ.
Posted by Blue Wave 707 at 07:00 No comments: 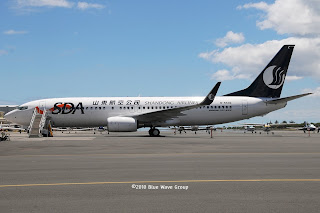 Just found out from RobK (on Airliners.net) why Boeing 737NG delivery flights were stopping at PNI. According to the MAJ NOTAM, it seems that the fuel supply is limited to scheduled flights. 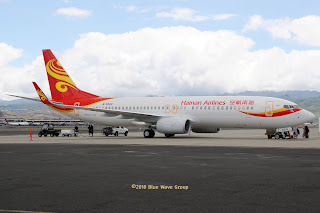 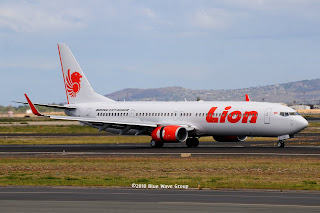 Lion Air is taking delivery of its fourth 737-9GPER this month. PK-LGZ (c/n 37271) is making its trans-Pacific trek as LNI1, and made its brief tech stop at HNL earlier today. It will continue onto PNI and BIK before reaching CGK.
Posted by Blue Wave 707 at 12:35 No comments: 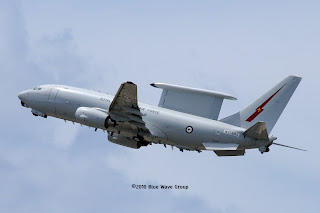 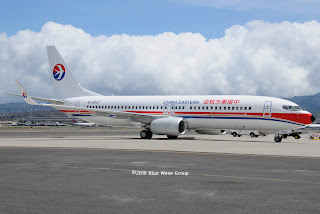 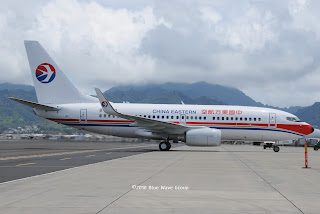 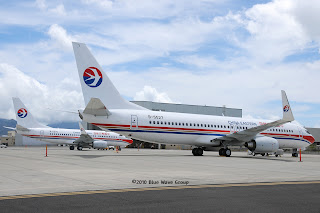 According to the FlightAware, both flights made stops at PNI (Pohnpei International, Caroline Islands, Federated States of Micronesia), then GUM, before reaching PVG.
Posted by Blue Wave 707 at 06:33 No comments: 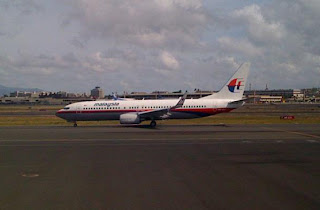 It appears that Malaysia Air System's first 737-8FZ, 9M-MLF (c/n 29657) made its delivery flight, but its flight was not listed. Thanks to team member Lono_68, he spotted the 73H taxiing town C to depart HNL. According to sources, the flight was listed as MAS5403, but not shown on flightaware.com.

HNL RareBirds was privileged to be aboard one of two C-17A Globemaster IIIs of the 535th Airlift Squadron this morning, in an air drop demonstration. The flight took us from HIK to the Pohakuloa Range on the Big Island, where each C-17 dropped two pallets to ground forces below in support of the RIMPAC 2010 exercise.

Members of Hawai‘i's social media community were invited by Pacific Air Forces to be aboard the Boeing-built cargo jets. 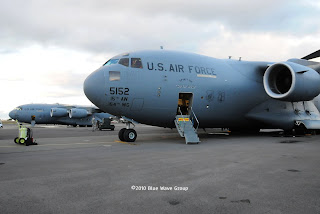 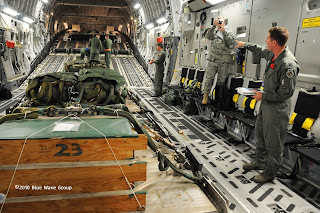 The two cargo pallets that would be air dropped over Pohakuloa. The loadmasters on the cargo ramp door are checking the rigging of the chute system that will extract the pallets from the C-17. 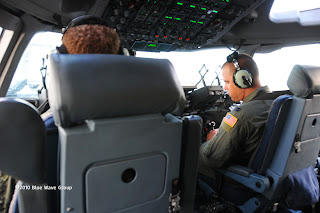 I was selected to sit in the jumpseat behind our flight crew of Captains Partridge and Hamilton in "Lava31" during the departure from HNL's Runway 8R. As advertised, we were wheels up in a few thousand feet of runway. Our departure was under a light shower, and the sun rising over the Ko‘olau mountains and clouds. 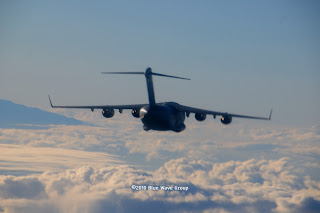 We flew in formation with "Lava32" ahead of us, with Maui's Haleakalā off 32's left wing. 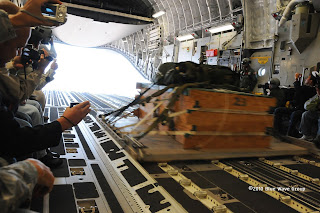 As we approached the drop zone, CMSGT Orrie opened the rear cargo doors, and we were able to see the Kona coast as we made our way toward the Pohakuloa training range. Once over our drop zone, the first chute was deployed to create the force to pull the pallets out. Above is one of our two pallets sliding down the cargo deck's rails and rollers as a drag chute pulls it out of "Lava31". The training range is located about 5,000 feet above sea level, and we made our drops about 500 feet above ground. 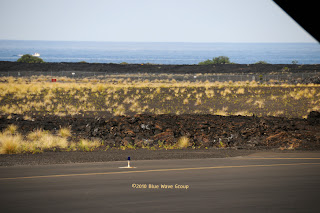 We made a few circuits over Pohakuloa watching "Lava32" make its drop, before we both landed at KOA (above) for a 15 minute break, before returning to HIK. We also had our lunches that we purchased from the Air Force. 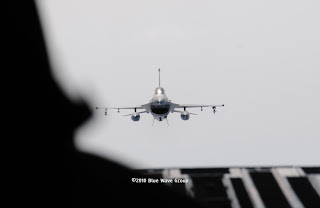 During the flight back to HIK, we were also treated to an intercept by four F-16s. Since I was seated toward the center of the C-17, this was the only F-16 I saw.

After the intercept, we made our way back to HIK, landing on HNL's Runway 8L. Our taxi back to HIK was a bit slow, as we got caught in the mid-morning departure rush at HNL.

It was an amazing experience! It's not everyday where civilians get to ride on a C-17. It was not the norm, since we were seated sideways, and there are no windows. The professionalism of the air crews demonstrated why our air force is top notch. Boeing has definitely built one great and tough aircraft as well.

HNL RareBirds extends a huge mahalo to Pacific Air Forces, the 15th Wing, and the 535thAS for your service to our country and the opportunity to be on the flight!
Posted by Blue Wave 707 at 12:23 1 comment: 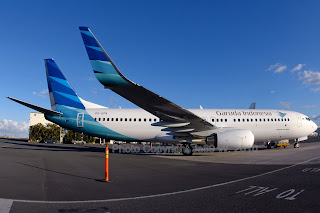 Apparently, Garuda Indonesia's PK-GFA (c/n 36549), a 737-86N, made its delivery flight through HNL. It arrived yesterday, and departed for MAJ earlier this morning as GIA8011.

I did not see this flight on flightaware.com yesterday, only this morning ... 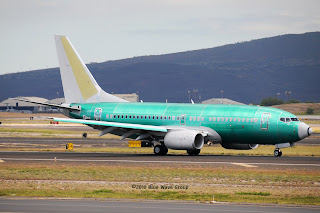 It will receive the "Wedgetail" antenna, similar to the Royal Australian Air Force's and Turkish Air Force's 737-7ESs. The RoKAF has four "Peace Eyes" on order, with all built, and none delivered. 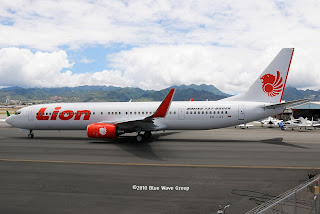 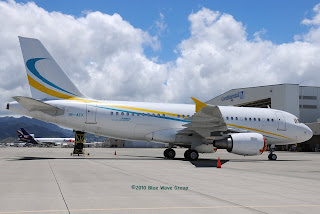 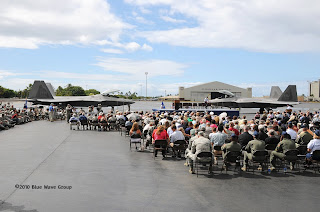 HNL RareBirds extends a warm mahalo to the Hawai‘i Air National Guard and the 15th Wing for the opportunity to attend the blesing, and for serving our country,
Posted by Blue Wave 707 at 14:13 1 comment: 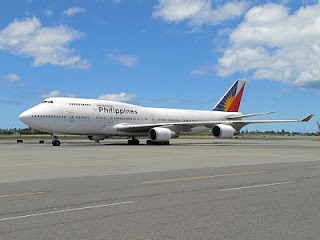 Today, the US Department of Transportation finalized the four slots at HND (Haneda, Tokyo, Japan), with Hawaiian Air receiving one one of those coveted slots. Delta was awarded HND-LAX and HND-DTW, and American was awarded HND-JFK. 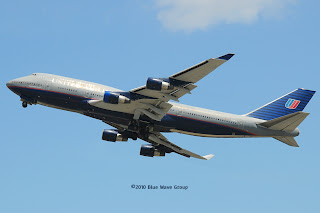 As recently as this past February, N194UA was photographed in storage at VCV.
Posted by Blue Wave 707 at 19:56 2 comments: 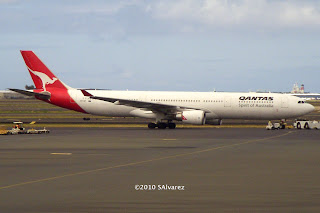 JetStar substituted Qantas' VH-QPI "Cairns" (msn 705), an A330-303, on their JQ3 SYD-HNL flight this morning, as one of the JetStar A330s was unserviceable. They turned to their parent company to charter a QF A330, and changed the flight number to QFA6403. 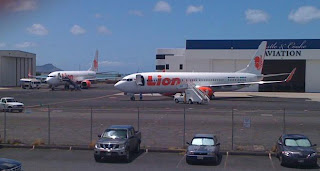