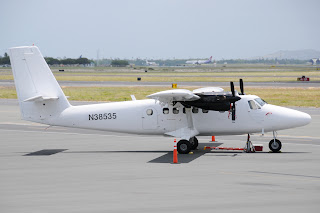 Southern Cross Aviation is ferrying a DHC-6-310 Twin Otter from PLS (Providenciales, Turks & Caicos Islands) to NAN (via FXE, BGE, LCH, BWD, DMN, HII, CMR, HNL, CXI, and APW) as SXA834. N38535 (msn 414), currently registered to Deborah Aharon Trustee of Providenciales, Turks & Caicos Islands. The Twin Otter arrived here in the evening of the 24th from CMR, and left this morning for CXI. According to team member Bargeld01, it's being delivered to Pacific Sun (an AIr Pacific subsidiary), and will receive a Fijian registration of DQ-PSD.
Posted by Blue Wave 707 at 21:29 No comments: 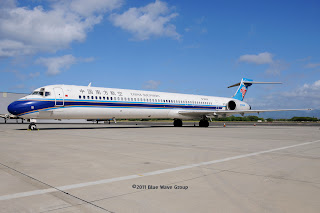 B-2252 is seen above on HNL's South Ramp, basking in the morning sunlight. 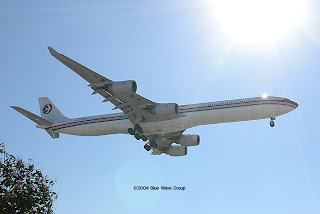 China Eastern Airlines (MU/CES) is seeking government approval to provide Tuesday and Friday service between PVG (Pudong-Shanghai International Airport, Shanghai, China) and HNL using an Airbus A340 with 300 seats. The variant was not defined, though their A340-300s are listed as having 287 seats, and their A340-600s have 320 seats. Service is scheduled to begin on August 9th.
Article link from China Economic. Hawaii News Now's Howard Dicus also reported this announcement on this morning's "Sunrise" morning news.
In the above photo taken in 2004, it shows this China Eastern A340-642, B-6051 (msn 488), on final approach to LAX's Runway 24R.
When China Eastern flew their PVG-HNL charter flights earlier this year, they used their A340-313Xs.
Posted by Blue Wave 707 at 07:58 No comments: 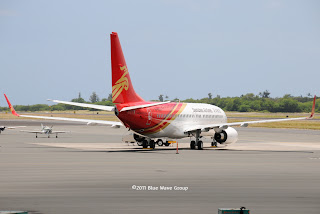 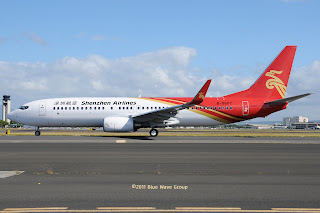 It appears that Shenzhen Airlines has modified their livery again, reverting it to the original version of their 2007 livery. In 2009, the red portion was moved further forward to where the titles were partially obstructed within the stripes and red area.
Posted by Blue Wave 707 at 07:46 No comments: 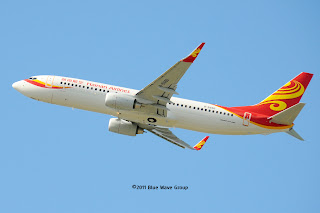 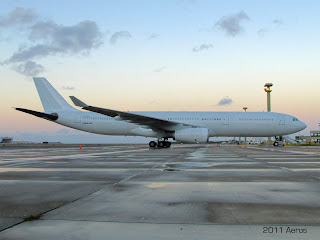 Air Transat's (TS/TSC) C-GTSD is seen here on the ramp after arriving from Manila (RPLL/MNL) as TSC6 last night. Searches of this A330-342's registration only shows up as it belonging to an A310-304 (msn 547) that Air Transat stored late last year. This aircraft will continue on to Montreal-Trudeau (CYUL/YUL) tonight. 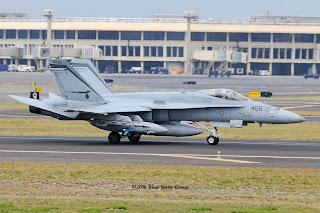 The United States Navy's Aviation Command celebrates its centennial anniversary this year. HNL RareBirds congratulates the US Navy and US Marines on completing their first century of aerial defense of our country! We also salute all of those naval aviators who have flown and maintained the aircraft to protect our country and our freedoms. On this Armed Forces Day, we thank the men and women of the US Navy and US Marines aviation corps for your service!
Pictured above is BuNo. 164197 (c/n 960/C192), an F/A-18C from the Navy's VFA-94 "Mighty Shrikes" (NAS Lemoore, CA), rolling out on Runway 4R after a training sortie in early 2010. The "Mighty Shrikes" based out of HIK during their training deployment.
Posted by Blue Wave 707 at 00:03 1 comment:

Labels: US Marines, US Navy 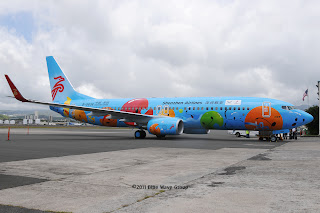 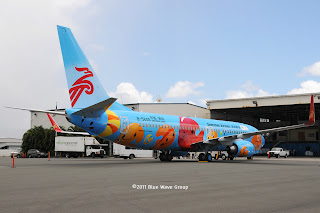 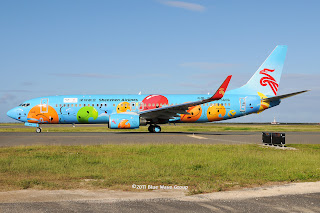 A special-liveried Shenzhen Airlines 737-87L, B-5606 (c/n 39143, l/n 3624) is making its delivery flight from BFI to SZX, by way of HNL, MAJ, and SPN, as CSZ905. Its livery commemorates the XXVI Universiade 2011 games being hosted in Shenzhen, Guangdong, China in August. Similar to the Air China 2008 Summer Olympics logojet, the Shenzhen 737 features the caricatures playing the sports featured at the games, but both sides feature the same events.

The Universiade Games is held by the International University Sports Federation (FISU) in both summer and winter sports.
Posted by Blue Wave 707 at 15:42 No comments: 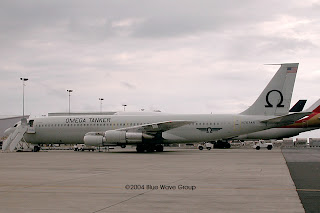 One of the two Omega 707-300 Tankers crashed today at NTD (NAS Point Mugu, Port Hueneme, CA). N707AR (c/n 20029 l/n 790), their 707-321B, crashed on its take-off roll this afternoon. Thankfully, all three crew members escaped the classic Boeing before flames enveloped the airframe.

It was initially reported that N707MQ in various media circles was the 707-300B involved, but the National Transportation Safety Board (NTSB) stated in their preliminary report that it was N707AR.

20029/790 was originally delivered to Pan American Airways (PA/PAA) in March 1969 as N892PA, named "Clipper Star King". In March 1983, it was leased to Global International Airlines, and re-posessed six months later. In May 1984, it was acquired by Falcon Aircraft Conversions, and re-registered as N729Q, where it was leased to Skystar International (June 86 - June 87), National Express (June 87 - June 88), and PLUNA (June 88 - June 95). JARO, a Hungarian airline, acquired it in June 95, and registered it as EL-AKS. Finally, it was sold to Omega Tanker in June 96, and registered as N707AR, and modified as a drogue-type aerial refueler, that was commonly seen accompanying US Navy and US Marine fighter aircraft.

On a personal note, I was privileged to take a tour of N707AR, back in November 2004, when it was parked on Hard Stand A (South Ramp). The above photo was taken before we boarded the 707. Except for the drogue release port and the hush-kitted JT3Ds, it looked like a 707 from back-in-the-day. The interior had been re-fitted with the '70s-'80s style overhead bins, and most of the coach seats were removed, though a several first class seats were still there. It was definitely a "chicken-skin" moment to set foot on a 707 again after 32 years after my first flight as a nine-year-old, too bad we weren't able to go up with it while it was here ... 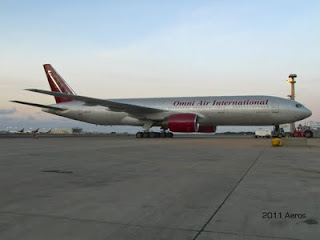 Omni Air International's first of two 777-222ER's is seen above resting on the North Ramp hardstands after arriving from Hartsfield-Jackson International (KATL/ATL), Atlanta as OAE778. N918AX (c/n 26935, l/n 88) previously flew for United Airlines as N789UA and Air India as VT-AIL before being leased by Omni. 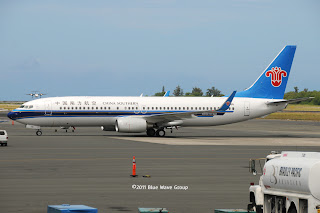 B-5586 was to have been registered as D-ABKR had it gone to AirBerlin. The airframe was purchased by ICBC Leasing, then leased to China Southern.
Posted by Blue Wave 707 at 12:38 1 comment: 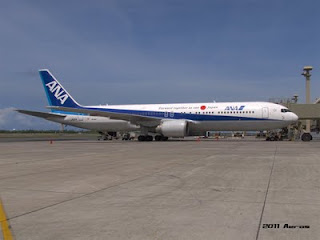 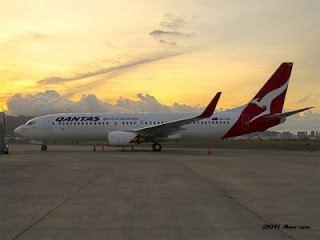 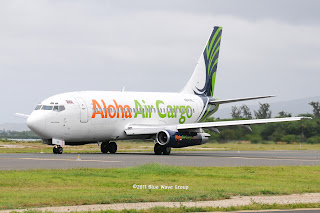 Today, Aloha Air Cargo (KH/AAH) celebrates its third anniversary! The cargo division from the now-defunct Aloha Airlines was resurrected by Saltchuk Resources (who also owns Young Brothers Barges here), with the help of US Senator Daniel K. Inouye. In October 2008, the airline unveiled the current livery (seen above). Three 737-200Cs make up the AAH fleet, and will be joined by two Saab SF340BFs this summer.
N841AL (c/n 23123, l/n 1042) "Spirit Of Aloha", a 737-2X6C/Adv, taxies on Taxiway RT to depart for OGG as AAH20.
Posted by Blue Wave 707 at 07:32 No comments: 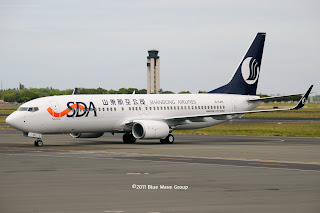 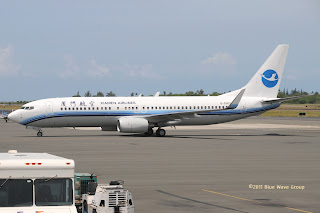 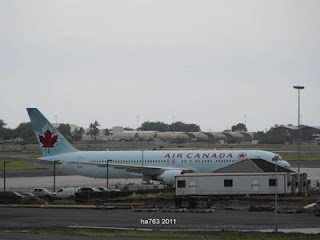 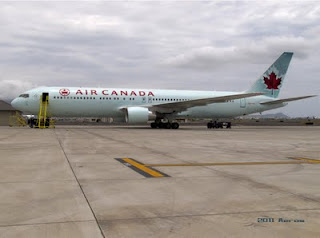 N591HA, which Hawaiian returned to its lessor and repainted into Air Canada colors, is back at HNL. It passed through HNL last month on its way to XMN for maintenance. It is parked on the new hard stands on the Ewa end of the airport and still has N591HA as its registration. It arrived today from XMN as HAL9983. 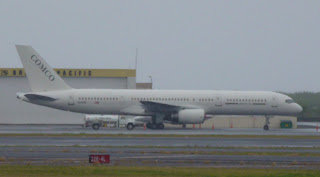 Not the clearest of shots, taken in the wind and rain and fading light on Saturday night, but better than nothing! It appears to be routed HNL to GUM at the present time now, Sunday. N226G arrived from PHX.
Posted by Bargeld01 at 16:13 2 comments: 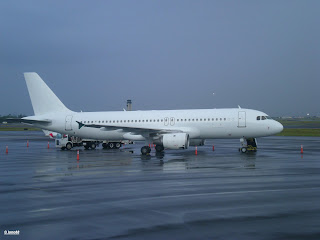 Both All Nippon Airways and Japan Airlines had their "Japan: Endless Discovery" titled 777-200s at HNL today. Both "Triples" departed within 15 minutes of the other. 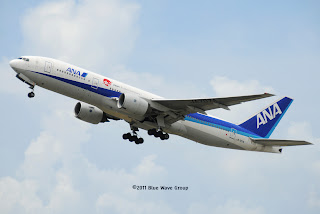 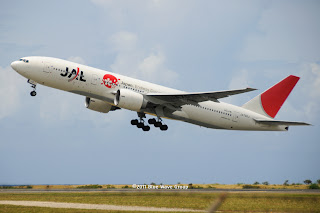 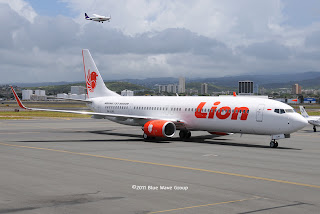 PK-LHR is seen above taxiing to the Castle & Cooke Aviation ramp for its 90-minute fuel stop, after arriving from BFI.
Posted by Blue Wave 707 at 07:39 1 comment: 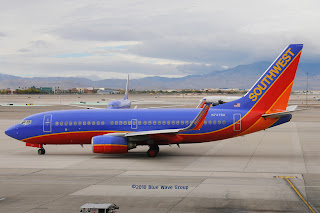 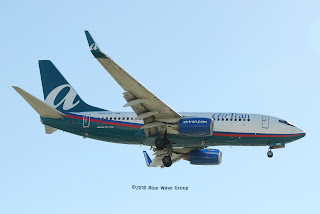 The acquisition of AirTran (FL/TRS) by Southwest Airlines (WN/SWA) was completed today at Dallas' Love Field. AirTran will begin integration into Southwest, and should have a single operating certificate by early 2012. 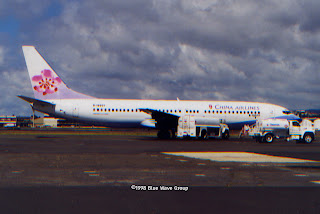 B-18601 was transferred to their Mandarin Airlines subsidiary in November 2000 for a five month stint. It continues to fly for China Airlines.

This one of the first delivery flight photos I took.
Posted by Blue Wave 707 at 07:38 No comments: