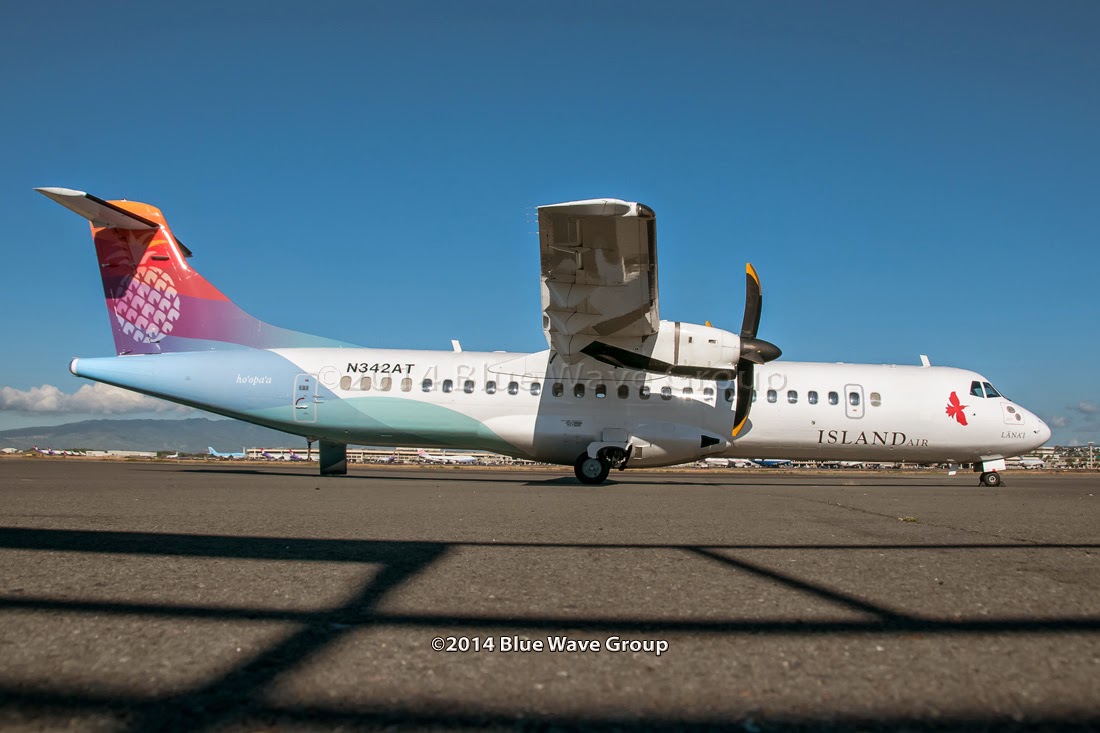 As part of a cost-cutting move, Island Air announced that they will end service to LIH on June 1st. Service to OGG will be adjusted as well. Reports also say that 70 employees will be laid-off, and the plan to re-introduce the Q400 have been shelved.

Further information in this Island Air press release, and Hawaii News Now article.
Posted by Blue Wave 707 at 22:12 No comments: 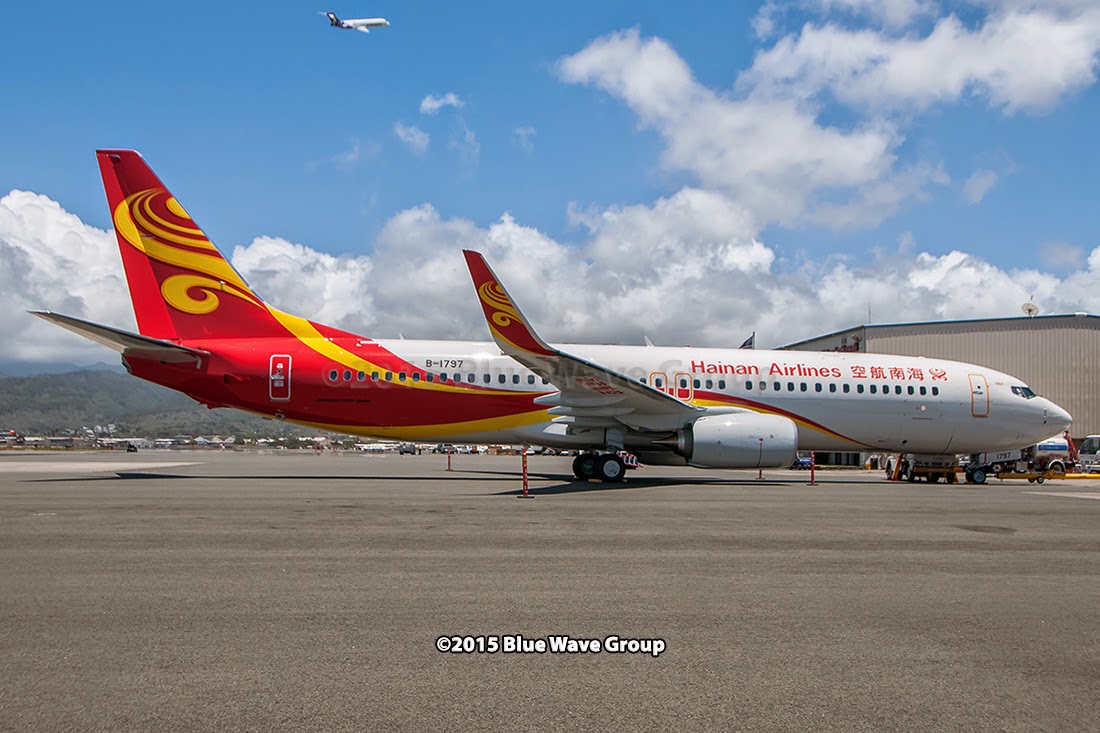 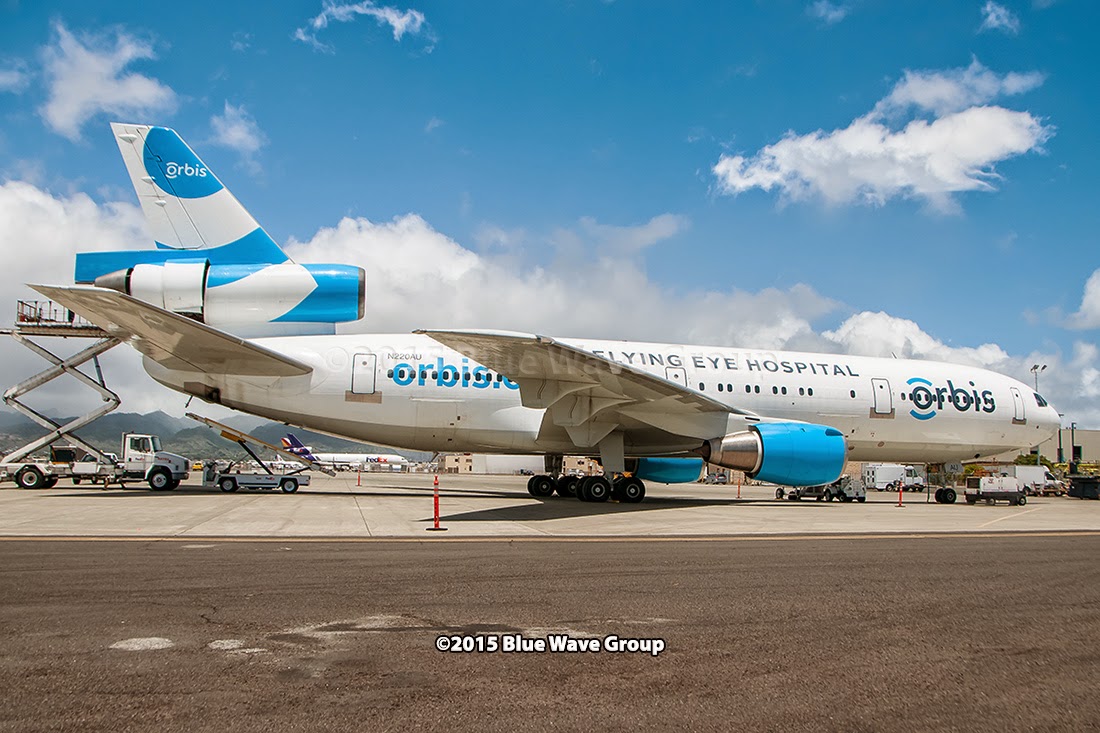 This DC-10-10 was the second off of the McDonnell-Douglas assembly line, and was built in December 1970 as N101AA. It was re-registered as N10DC, and became the sales demonstrator in December 1972. In June 1977, it was delivered to Laker Airways [GK/LKR] (United Kingdom) as G-BELO "Southern Belle". In February 1983, it was acquired by American Trans Air [TZ/ATA] as N183AT "City of Indianapolis". Three years later, it went to the UK to fly for Cal Air International [EN/CAI] as G-GCAL. In December 1988, it went to Novair [EN/NGK], Cal Air's successor. In November 1991, it went to Project Orbis to become their newer, larger flying eye surgery center.
Posted by Blue Wave 707 at 14:10 No comments: 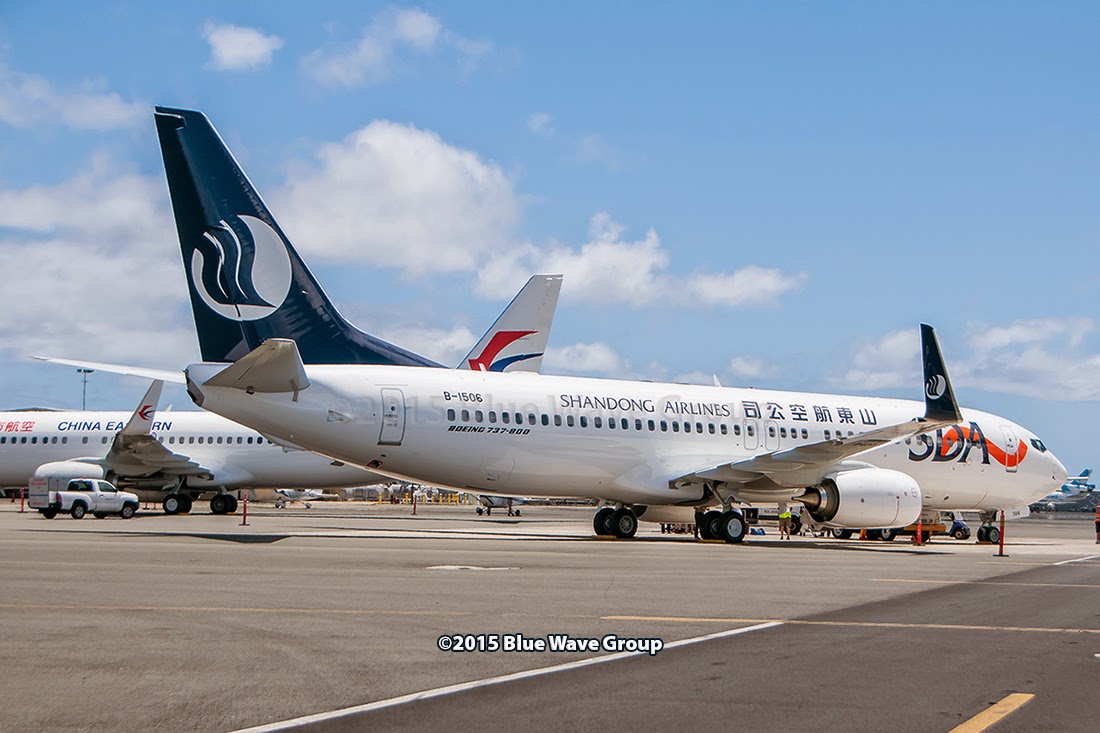 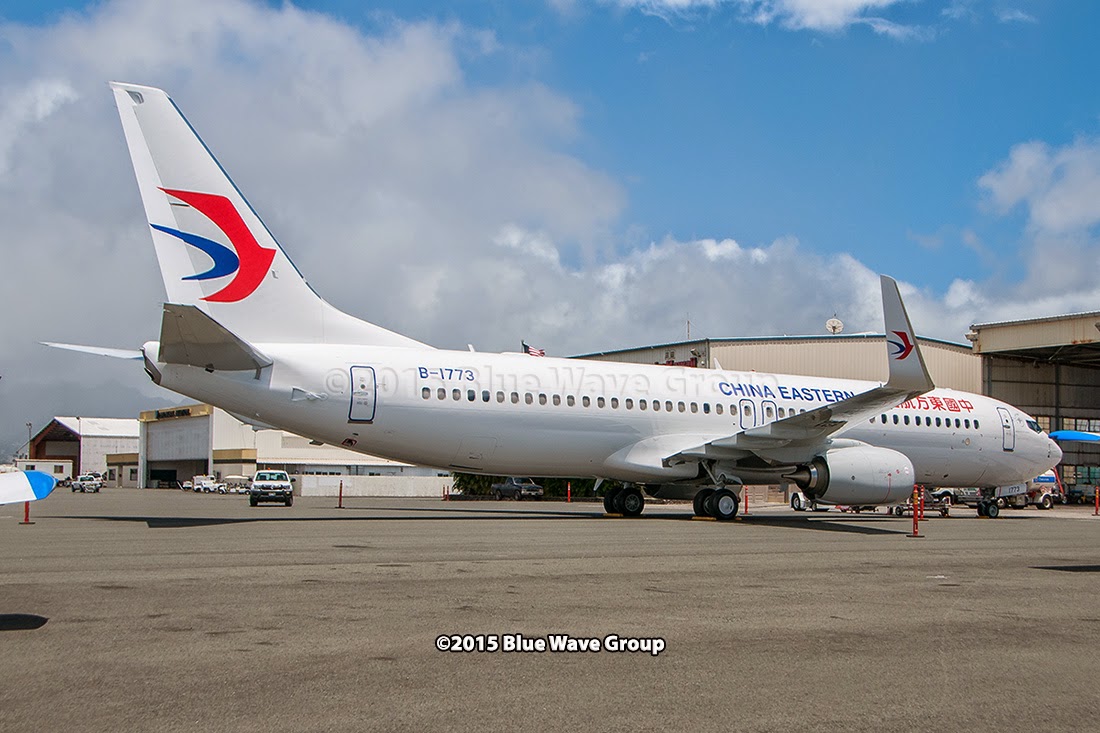 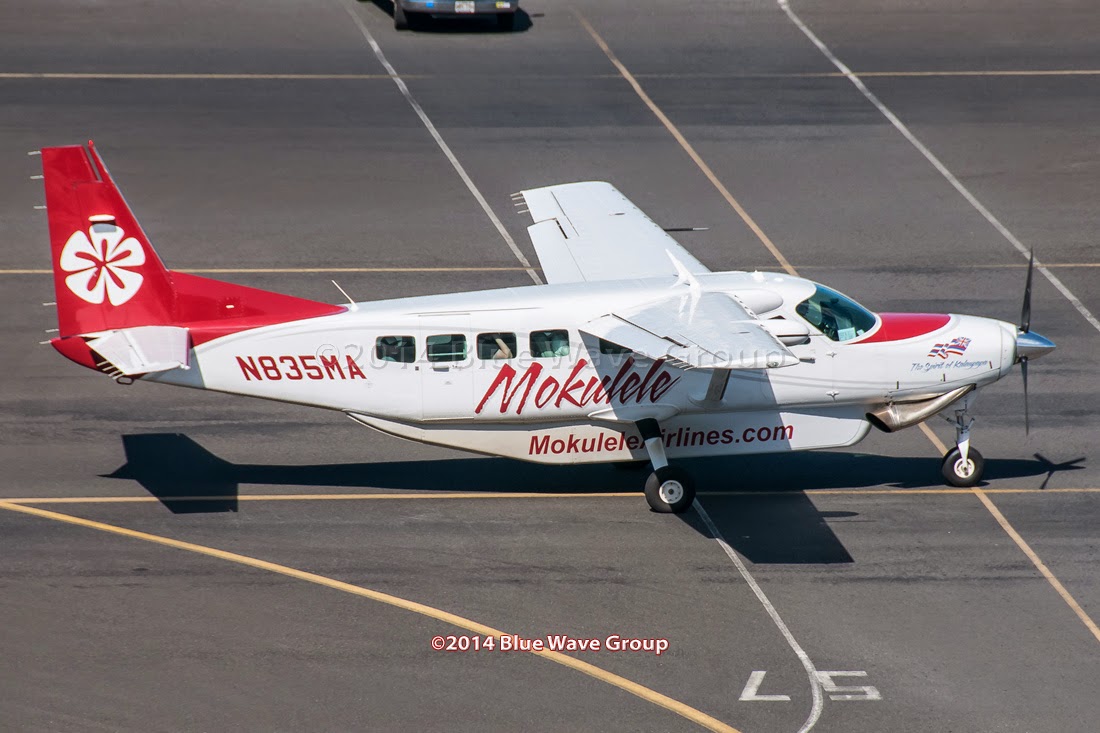 Hawaii News Now reports that a Mokulele Airlines C208B Grand Caravan, N835MA (msn 208B2335) suffered an engine failure shortly after departing OGG for KOA as MW1741. Thankfully the C208B made it back to OGG without incident and no injuries.

This is the second Grand Caravan engine failure for Mokulele on Maui within two years.
Posted by Blue Wave 707 at 22:52 No comments: 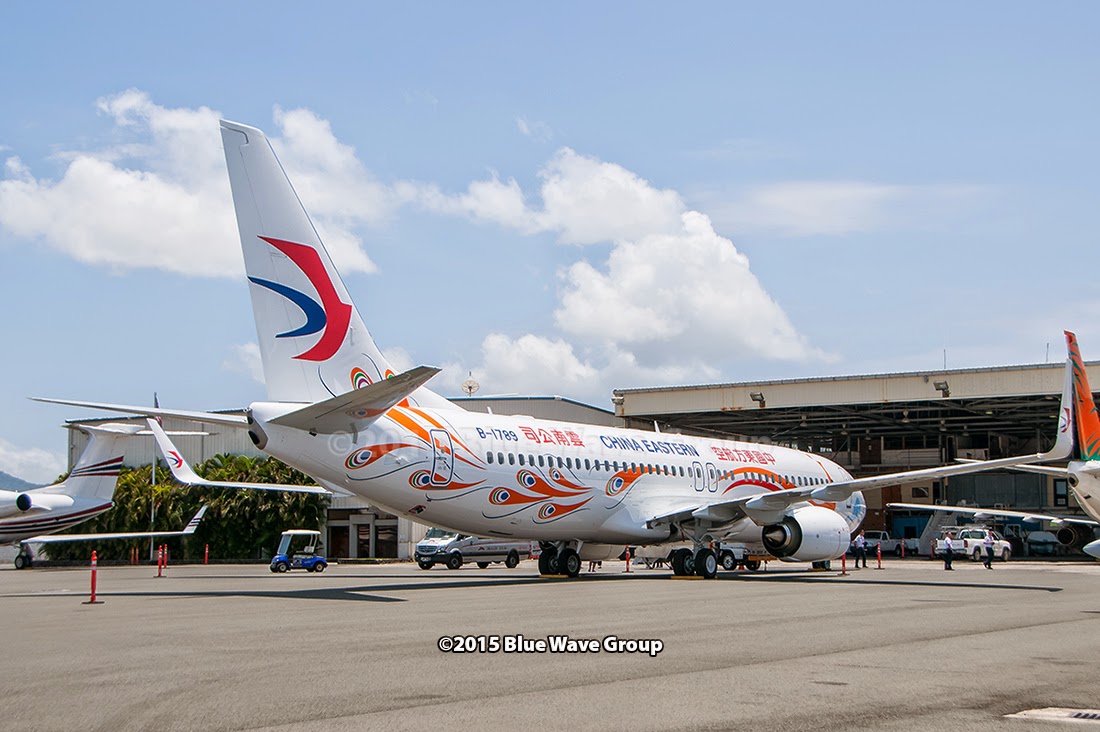 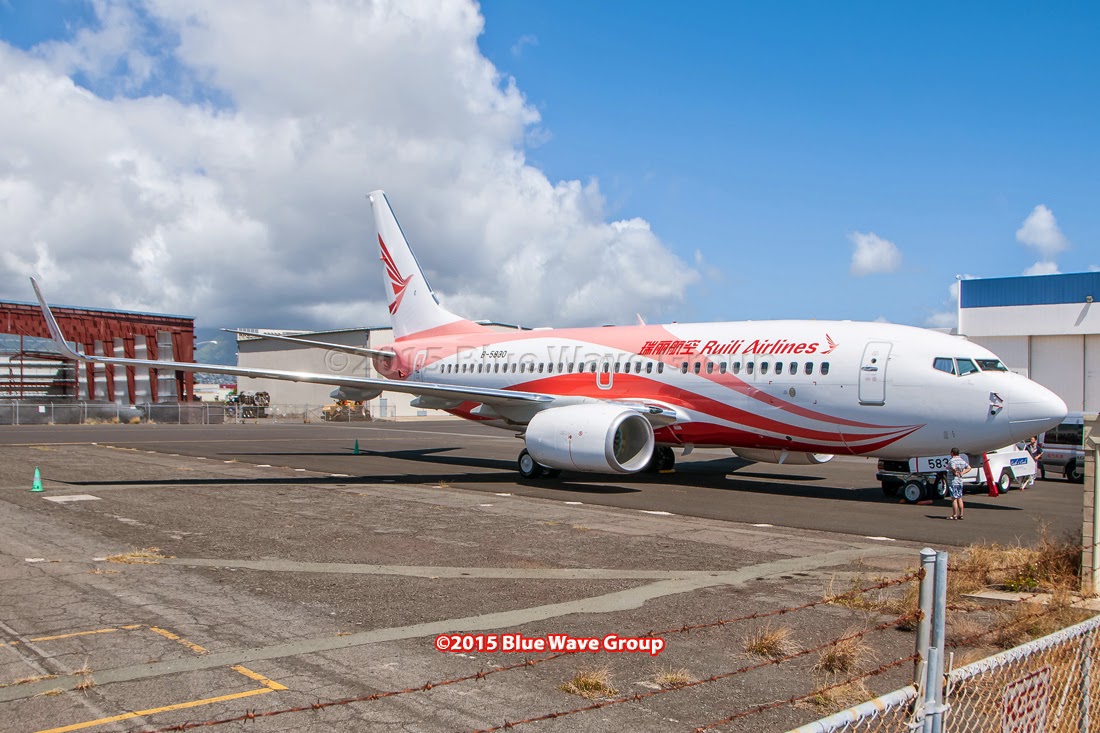 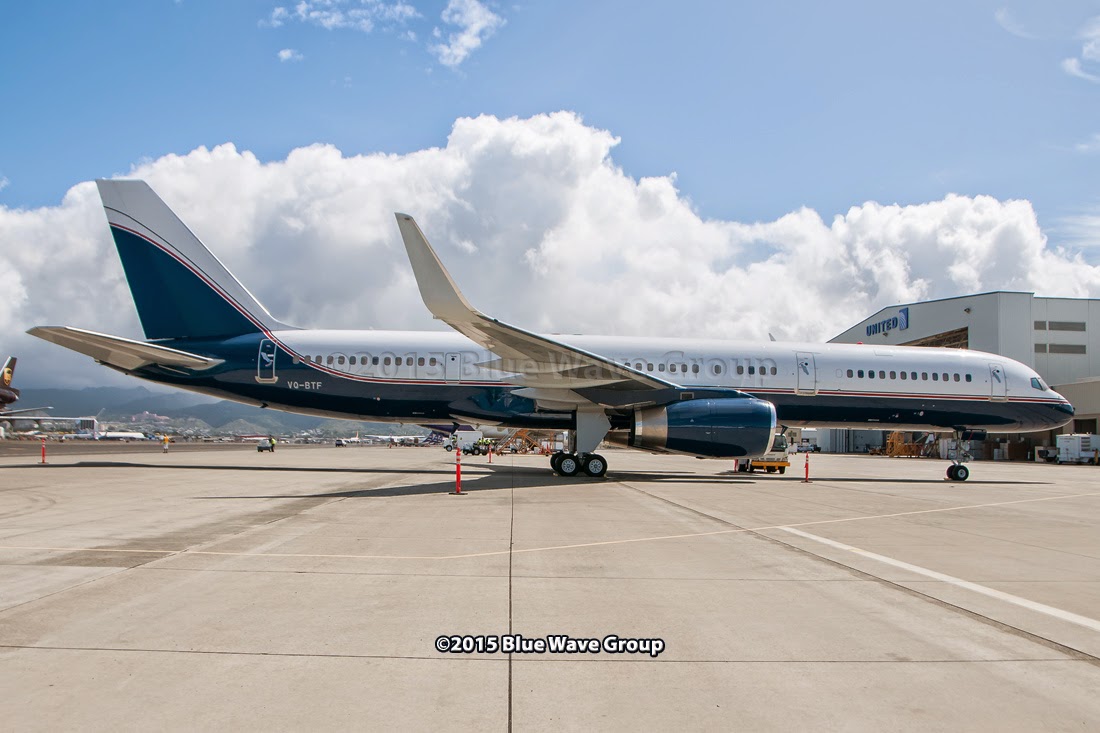 N12842 (msn 17262306), a Cessna 172M owned by Barlow Aviation LLC (Honolulu), crashed seconds after departing Hilo's Runway 21. There were three passengers on board, all sustained injuries, two of the three are in critical condition, and were flown to Honolulu for treatment.

Our thoughts and prayers go out the three passengers for healing and recovery. 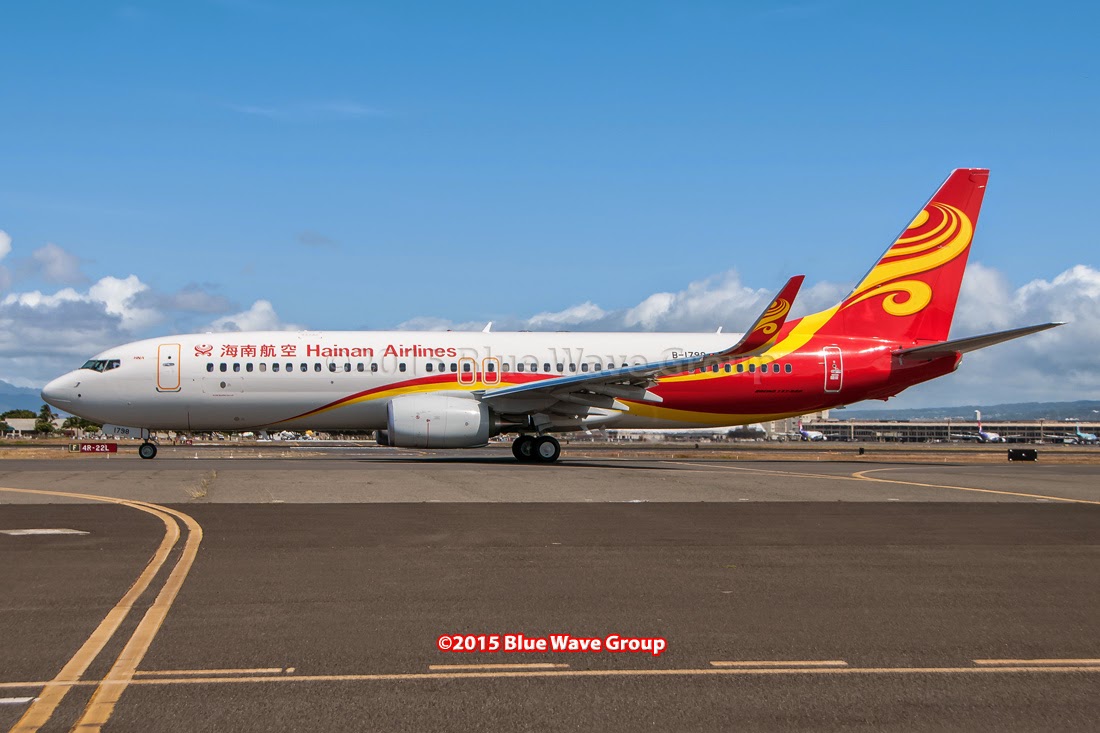 According to an article by AirwaysNews, AirAsia X's foray into the Hawai‘i market from Malaysia has an added move, a stop at KIX, between KUL and HNL. The stop would allow for fuel and additional passengers at KIX, and add another airline serving that part of the route.
Posted by Blue Wave 707 at 09:06 No comments:

The Seattle Seahawks football team chartered an Alaska Airlines 737-890 to Kahului, Maui today, as the team will conduct off-season workouts at the Kamehameha Schools Maui Campus. The "Adventure of Disneyland Resort" liveried N570AS (c/n 35185, l/n 2212) brought the 2014-15 NFC Champions to OGG as ASA9661. 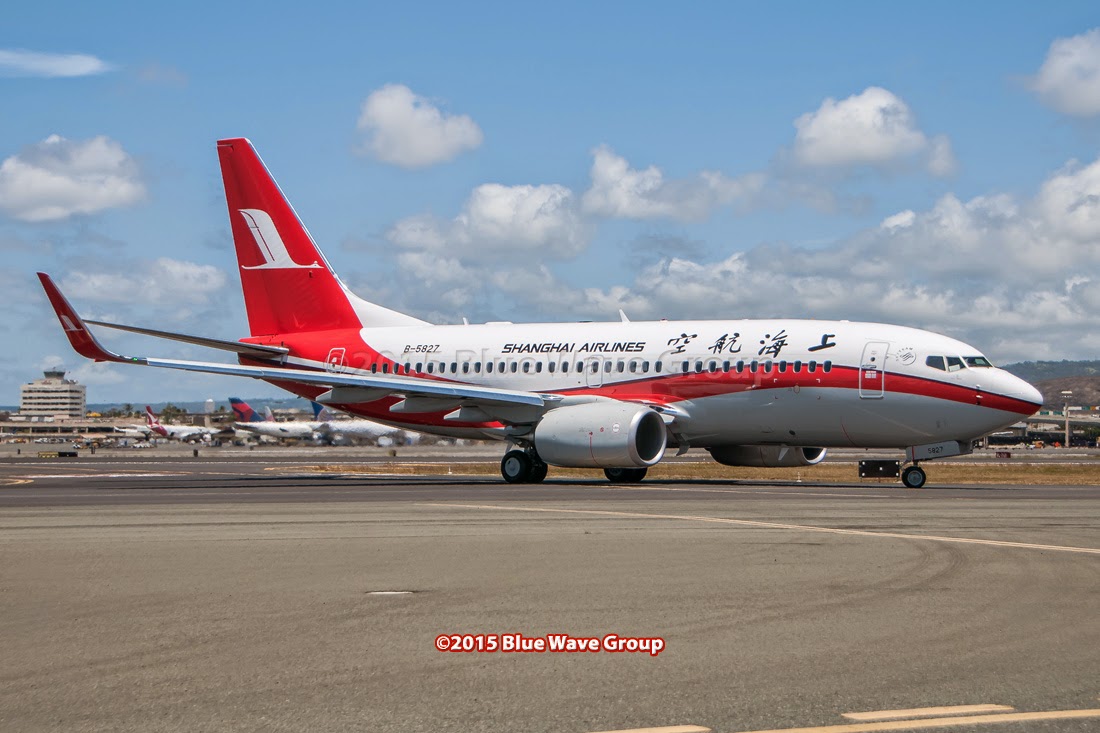 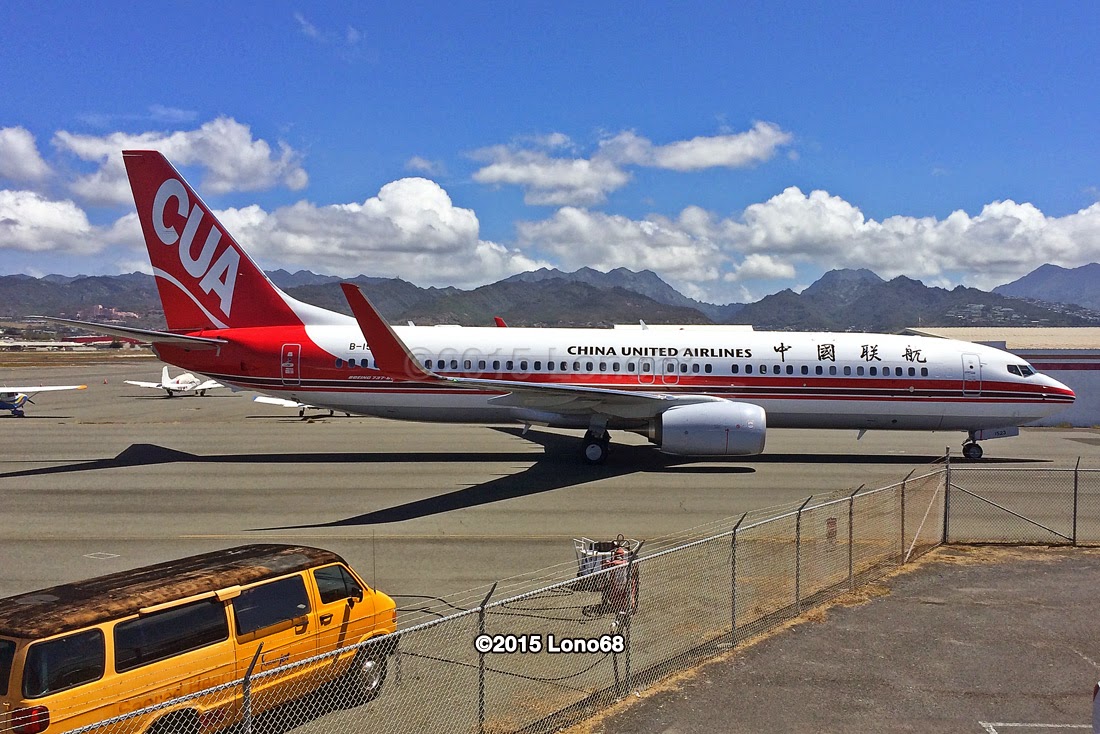 China United Airlines is taking delivery of B-1523 (c/n 37942, l/n 5349) this morning. The 737-89P, allocated by China Eastern Airlines, is making its delivery flight from BFI as CUA523, and will overnight at HNL. CUA523 will continue onto ROP [Rota, Northern Mariana Islands] instead of MAJ or PNI.

American And US Airways Under SOC

Beginning today, American Airlines and US Airways are now under a Single Operating Certificate (SOC). With this SOC, the US Airways IATA Code (US), ICAO Code (AWE), and callsign ("Cactus") will be retired, and the American code will take over.

Ticket counters and reservations systems will remain separate until later this year, when they will be integrated.

Further information in this American Airlines press release and World Airline News article.
Posted by Blue Wave 707 at 10:00 No comments: 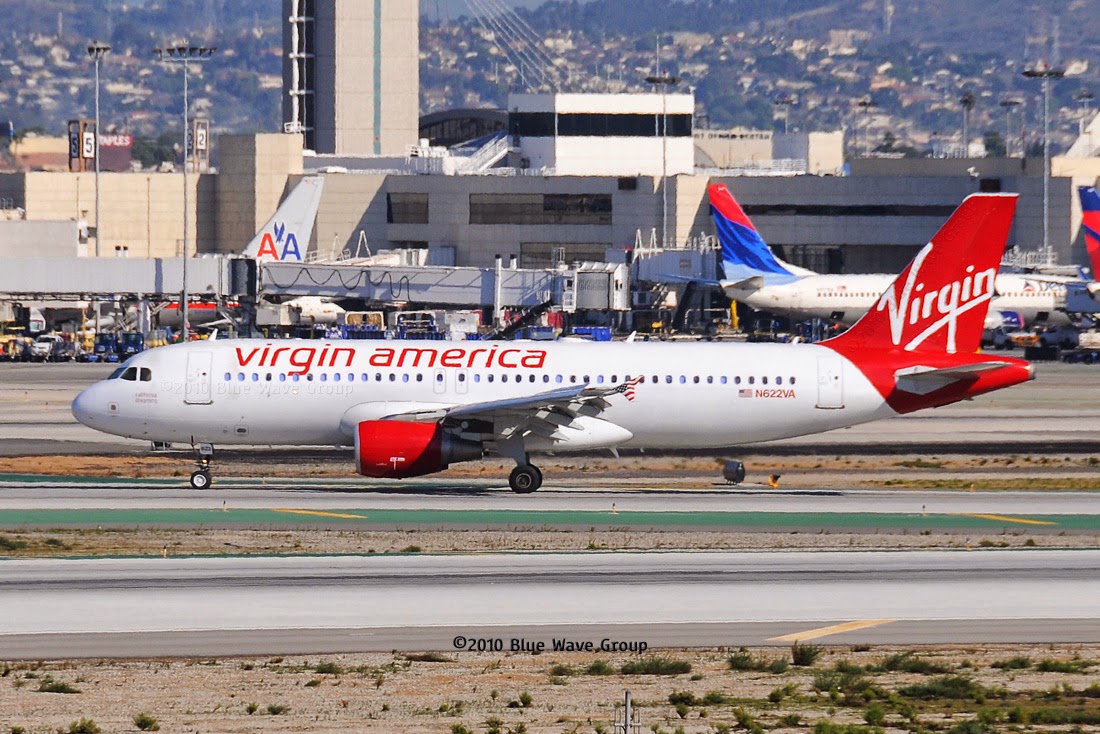 Virgin America [VX/VRD] announced today that they will begin daily flights between SFO and HNL on 02 November 2015, and daily flights between SFO and OGG on 03 December 2015. The airline will use new Sharklet-equipped A320s for the Hawai‘i routes, and is in the process of obtaining their ETOPS certification. With this new service, Virgin America will compete against Hawaiian Airlines, United Airlines, and Delta Air Lines.

Virgin America will become the first US carrier to attempt A320 ETOPS service between the west coast and Hawai‘i. CrankyFlyer offers their analysis of why Virgin America can succeed with A320 ETOPS operations.
Posted by Blue Wave 707 at 06:30 No comments: 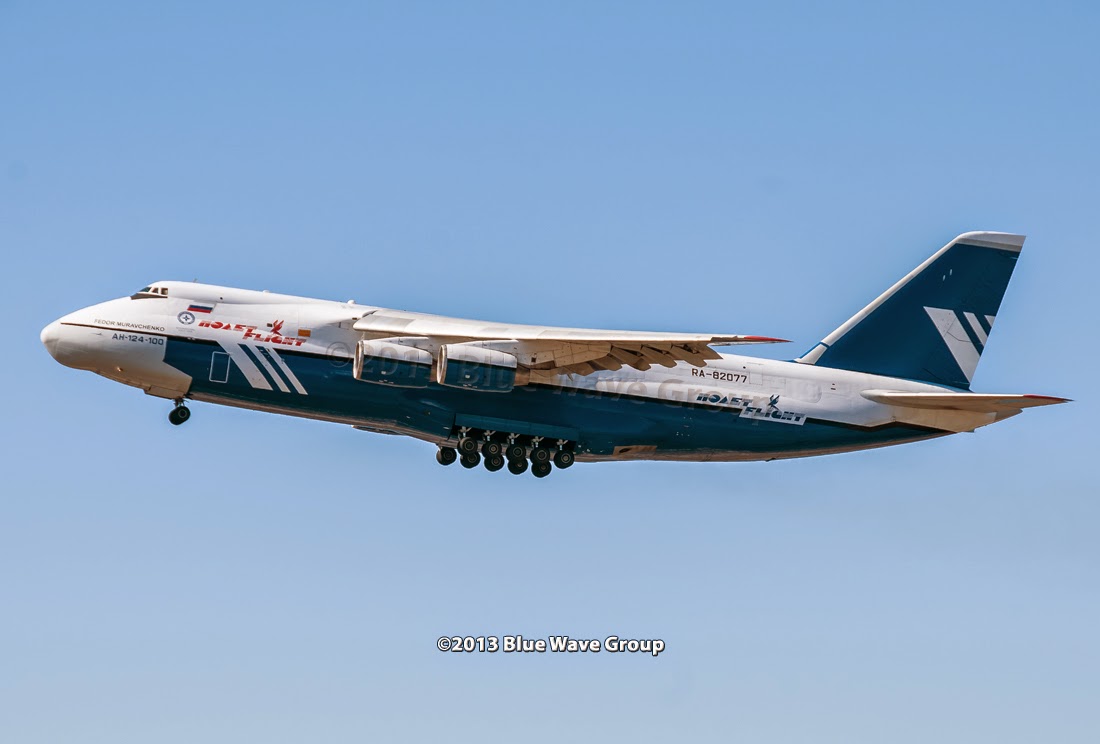 ATWOnline.com reports that the Russian government has canceled the Air Operator's Certificate for Polet Flight [YQ/POT] due to financial troubles. The airline used to fly military charter flights in behalf of the US Department of Defense. Its fleet has been put into storage for the time being. 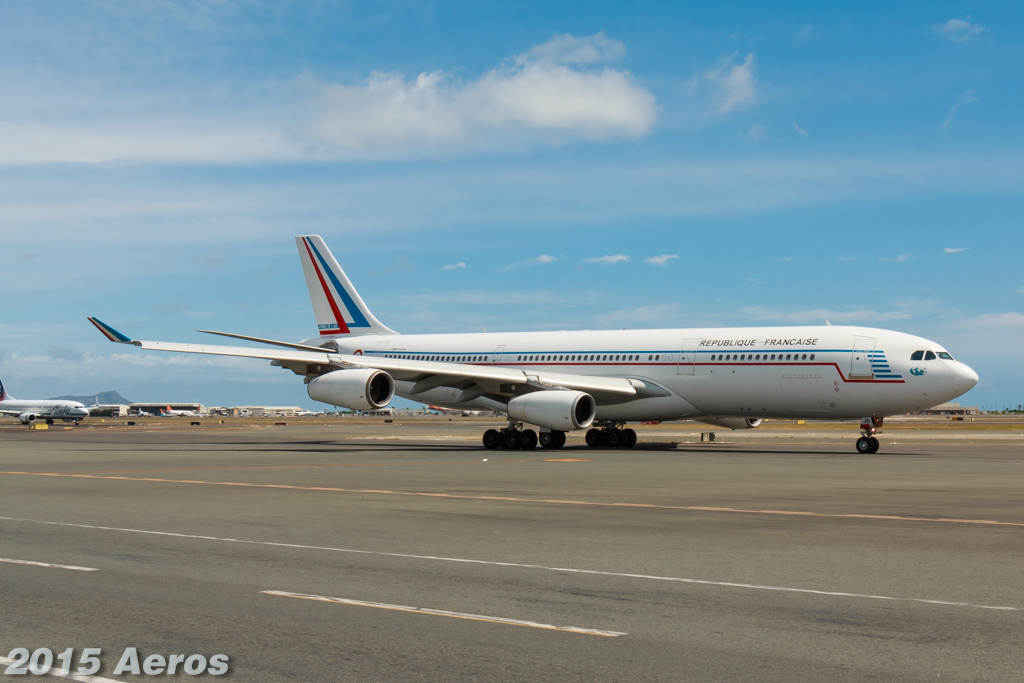 An A340-212 of the Armée De L'Air arrived this afternoon from YVR for a fuel stop. F-RAJB (c/n 081)[above] and sister-ship F-RAJA often utilizes Gate 34 instead of parking at Hickam when in Honolulu.
Posted by Aeros at 17:06 No comments: 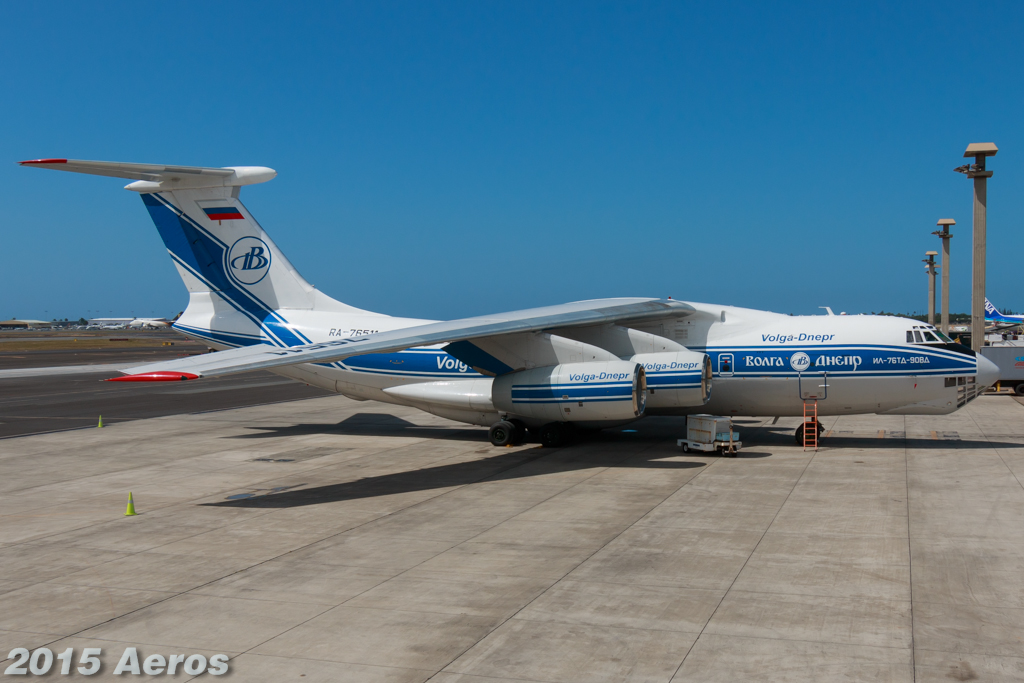 A lesser seen piece of Russian metal was in town today. A Volga-Dnepr Il-76TD-90VD arrived the previous night from Nandi International, Fiji (NAN/NFFN) and departed to Dallas Forth (KDFW) this afternoon as VDA6133. A search of RA-76511's (c/n 2123422752, l/n 94-08) recent flight history shows that it has been flying between Shanghai (PVG/ZSPD), Guam (GUM/PGUM), and Carins (CNS/YBCS) for the past week before heading to Texas.
Posted by Aeros at 21:42 1 comment: 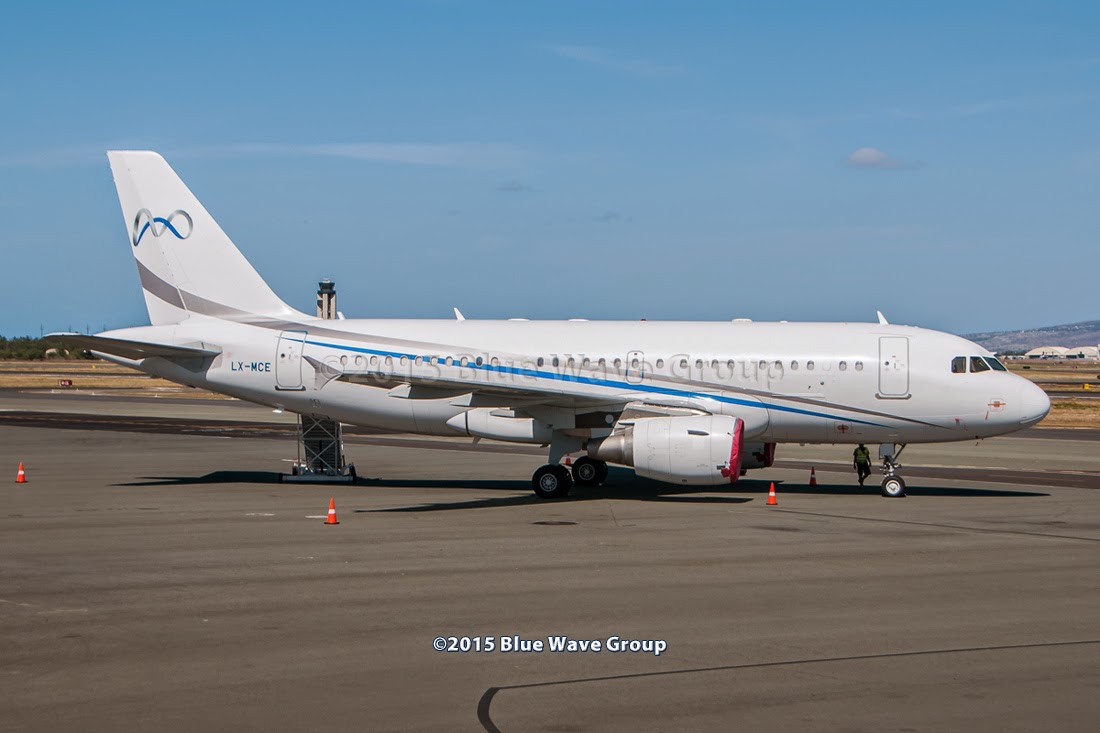 2592 was originally delivered to Comlux Aviation [CLA] (Switzerland) as an ACJ in June 2006 as HB-IPO. In January 2007, Comlux leased it to the Government of Кazakhstan as UN-A1901 as a presidential transport, and was operated by the Berkut State Air Company [BEC] (Kazakhstan). It was returned to Comlux 18 months later (June 2008), then sold to Air Luther AG, and leased back. Three months later, it was transferred to Comlux Malta as 9H-AFK. In July 2012, Comlux Malta purchased the ACJ from Air Luther AG, and re-registered it as 9H-MCE. In December 2014, it was sold to Global Jet Luxembourg.

This is the third time this ACJ has stopped in Hawai‘i since this site's inception. Its previous two stops were in August 2008, as HB-IPO, it stopped at OGG; and, in July 2010, as 9H-AFK, it stopped at HNL. 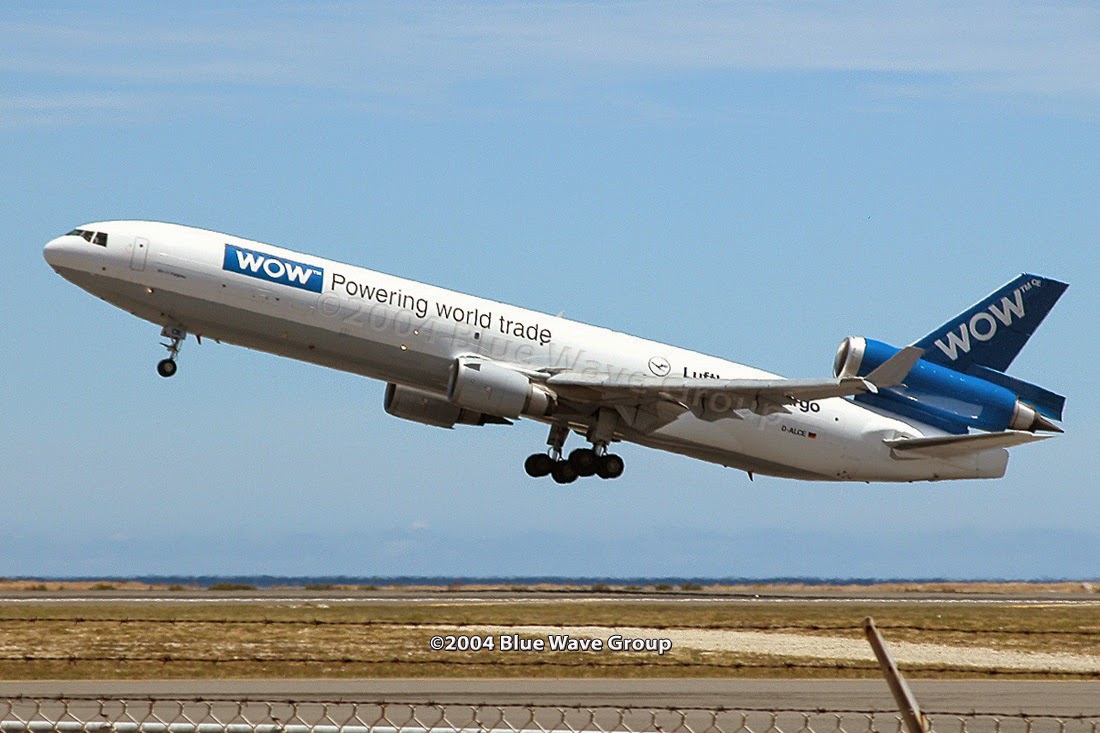 Our April edition of "HNL RareBirds Classic" takes us back to July 2004, with Lufthansa Cargo's [LH/GEC] MD-11F, D-ALCE "Marhaba Turkey" (c/n 48785, l/n 629), departing from Runway 8R for AKL. It was a code-share with Air New Zealand to fly cargo from Europe to New Zealand, with US stops at ORD and HNL.

D-ALCE was delivered to Lufthansa Cargo in October 1998, and remains with the German cargo carrier today in the standard livery. The above WOW special livery was worn from 2003 to 2008, and was the only GEC MD-11F to wear it. Other MD-11Fs had a small WOW decal applied near the aft passenger doors.
Posted by Blue Wave 707 at 11:00 No comments: 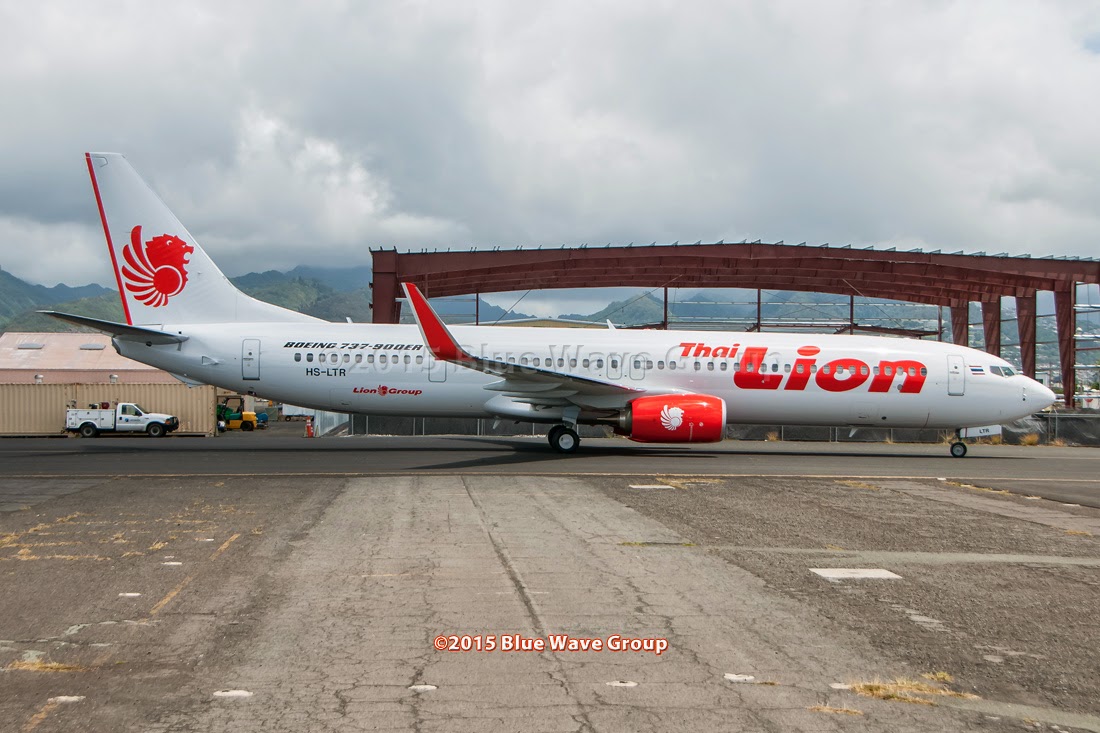