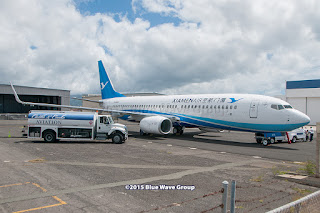 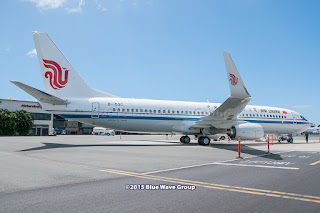 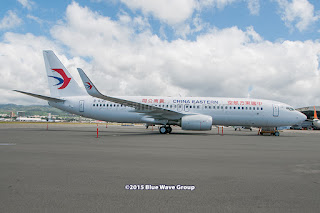 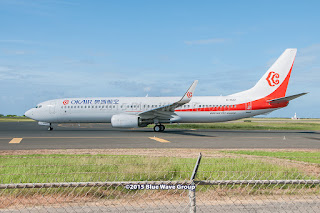 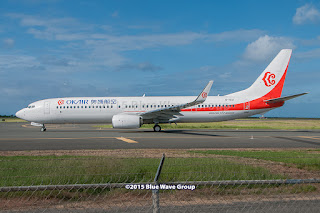 This DC-10-30 began service with Thai International Airways in December 1987 as HS-TMB. In April 1998, Northwest Airlines acquired it, and registered as N239NW. In October 2006, Omni Air International acquired this trip-jet, and registered as N612AX, where it flew until January 2012. After it was withdrawn from use, it was placed into storage at GYR. Omni sold it to BC Aircraft Leasing in November 2013.
Posted by Blue Wave 707 at 23:06 1 comment: 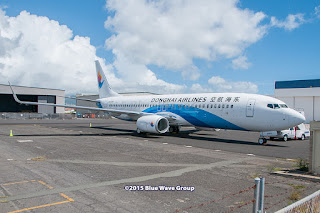 Boeing and China have agreed to build a completion center in China for the 737MAX orders that they ordered, which accounts for 25% of new version of the 737.

It means that many of the 737MAXs may stop through HNL as white tails, or with the green protective coating over the bare aluminum.

Further details in this Boeing Media Room press release, and local coverage in this The Seattle Times report.
Posted by Blue Wave 707 at 11:07 No comments: 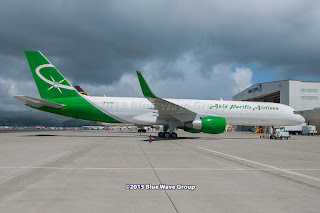 Asia Pacific Airlines has moved N757QM from its Taxiway F holding spot to the South Ramp, and prepping the their new addition to enter service.
Posted by Blue Wave 707 at 10:09 1 comment:

Early this morning, there was a 737-800 that stopped off at JRF for a brief fuel stop. FlightAware has it listed as JTN5092 with the routing from PVG to GYR (with stops at SPN and JRF). Jet Test International is an aircraft ferry service based in Henderson, NV. We aren't sure what the registration is for this 737-800, nor which airline it was with.

The Visiting PHX website shows JTN5092 arriving at GYR in Boliviana de Aviación's [OB/BOA] livery, and registered as 2-TBXG.
Posted by Blue Wave 707 at 07:21 No comments: 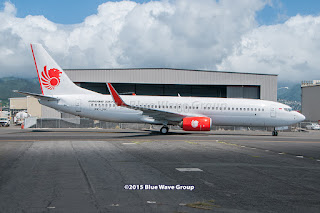 Lion Air is taking delivery of PK-LPK (c/n 39872, l/n 5586) today. The 737-8GP is making its delivery flight from BFI as LNI1, and will make a brief fuel stop at HNL, before continuing onto PNI. As seen above, PK-LPK has the Lion Air logo on the tail, engines, and Blended Winglets, but does not have titles.
Posted by Blue Wave 707 at 07:42 No comments:

Investing publication Motley Fool came out with an article yesterday regarding Hawaiian Airlines' A321neos, and the potential opportunities it sees the the airline has with the narrow-body airliner.
Posted by Blue Wave 707 at 22:58 No comments: 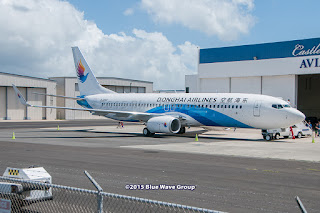 Between 04:00 and 04:45 Friday morning 9/18, there was a constant sound of loud, powerful jet engines.  I couldn't see anything posting on FlightAware, do any of you know about something such as a large deployment of military aircraft?  There was one about every 30-60 seconds.
Posted by 2003Z06 at 04:41 1 comment: 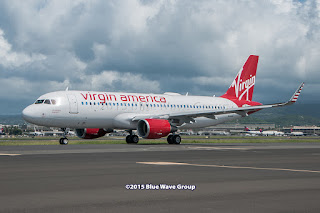 Mokulele Airlines has re-branded its logo and wordmark. The 2015 version replaces the 2008 look it had when the airline begun its E170 operations with Republic Airlines.
Posted by Blue Wave 707 at 09:54 No comments:

In a related note, all four of American's LAX-HNL flights are now served with A321-231s.

09.13.15 Update
In today's Star*Advertiser report, it lists AAL31 as the flight in question. Which means that N137AA was the ill-equipped A321. After arrival at HNL, it was ferried back to LAX as AAL9964, according to its flight history on FlightRadar24. Also listed in its recent flight history prior to August 31st, was that N137AA was used on routes within the Continental US. The Aviation Herald reports that N137AA was not ETOPS-certified at the time of this flight.
Posted by Blue Wave 707 at 10:21 No comments:

The HNL RareBirds team takes a moment to pause, remember, and pray for those lost on this fateful day 14 years ago.
Posted by Blue Wave 707 at 08:23 No comments:

The University of Hawai‘i Rainbow Warriors football team has chartered a Sun Country Airlines 737-800 to travel from LAX to CMH, for their Saturday game against the Ohio State University Buckeyes. N816SY (c/n 30637, l/n 800), a 737-8Q8, made the trip as SCX8661. The football team's Facebook page has a photo of the team deplaning at CMH.

From HNL, the team flew on a Hawaiian Airlines commercial flight to LAX last night, on HAL4, aboard N370HA "Kuamo‘o" (msn 1511). 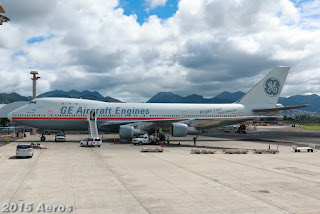 General Electric's engine testbed arrived from its home-base in Victorville, California this morning. After resting for the night, N747GE (s/n 19651, l/n 25) will depart for Guam in the morning. Unfortunately, N747GE flew in with its four factory equipped Pratt and Whitneys.

Despite being 45 years old, this 747-121 has only been with two operators. It originally was delivered to Pan Am as N744PA in March, 1970. It managed to remain with the company until Pan Am ceased operations in December, 1991. General Electric then purchased it in March, 1992 and refurbished it to be used as the company's engine testbed.
Posted by Aeros at 18:26 No comments: 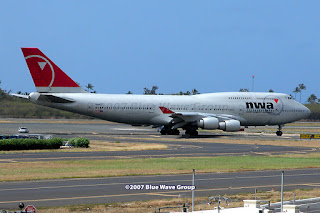 This 747-451 was originally registered as N401PW, as the prototype model for the -400, and first flew in April 1988. It was delivered to Northwest Airlines in December 1989 as N661US, under lease from AT&T Capital Services. When Delta and Northwest merged, Delta purchased N661US outright as it was transferred into the fleet. 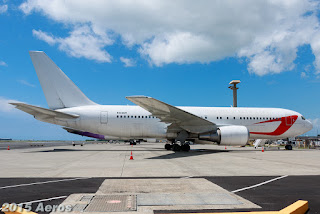 N253MY (c/n 23974, l/n 214) first flew with Air Mauritius in April, 1988 as 3B-NAL. It flew with Air Mauritius until March, 2007 where it was acquired by KMW leasing and leased to MAXjet with the current registration. Within the same month that it was leased to MAXjet, the company ceased operations. N253MY then went to Air Italy as I-AIGI in July, 2008 and flew with the airline until February 2013. The airframe was then returned to KMW Leasing with its US registration and placed into storage until Dynamic Airways leased it in May, 2014.
Posted by Aeros at 19:06 No comments: 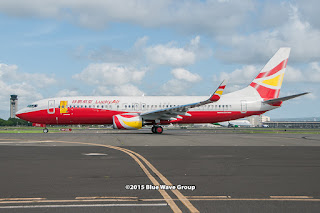 Flight Global reports that the CEO of NokScoot Airlines [NCT] (Thailand) has intimated of starting service between DMK and HNL in 2017 with 787-8s that the airline has on order.

09.09.15 Update
CH-Aviation reports that NokScoot may even use their 777-212ERs on the DMK-HNL flights. The Thai carrier is seeking a partnership with Hawaiian Airlines to provide onward service to the US mainland.
Posted by Blue Wave 707 at 07:14 No comments: 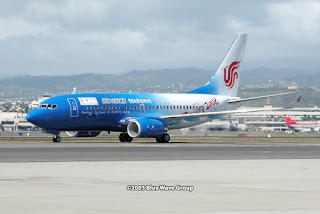 Our September edition of "HNL RareBirds Classic" goes back to October 2005, as Air China began promoting the 2008 Summer Olympics that Beijing would host. B-5201 (c/n 34023, l/n 1795), leased from AWAS, was the first 737 to promote the 2008 Beijing Games, and is seen above taxiing to its parking spot at HNL, as it made its delivery flight from BFI. The airline was listed as the official airline of the Beijing Games.

This special livery was worn until September 2008, when it was painted in the standard Air China livery.
Posted by Blue Wave 707 at 05:20 No comments: