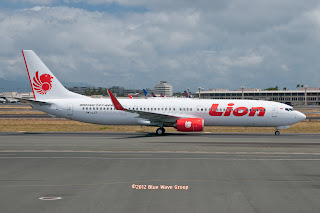 Allegiant Airlines announced today, that they will begin a weekly 757-200 flight between MRY [Monterey Regional Airport, CA] and HNL on November 16th.

More details in this Allegiant Airlines press release.
Posted by Blue Wave 707 at 09:07 No comments: 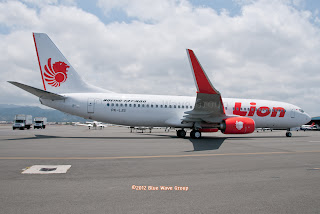 Frequent Castle & Cooke Aviation client, Lion Air, announced today that they will spin-off ten of their 12 737-8GPs for a new full-service airline, Batik Air, that will compete against rival Garuda Indonesia. The new airline is pegged to launch in March 2013.

Currently, Lion Air is in the process of receiving the bulk of their 737-8GP order, which were pushed ahead of the rest of their 737-9GPER order. PK-LJS, seen above, is Lionʻs most recent 737-8GP to be delivered.

More information in this Jakarta Post article.
Posted by Blue Wave 707 at 09:31 No comments: 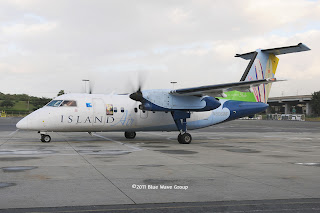 Island Air announced today, that they will increase their service between HNL and JHM to six daily round-trip flights, that begins on June 15th.

More details in this Island Air press release.
Posted by Blue Wave 707 at 18:29 No comments: 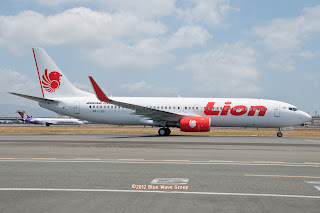 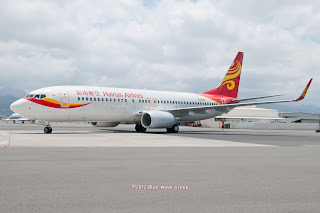 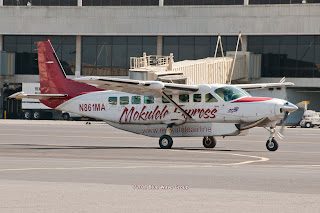 Mokulele Airlines will re-launch service to JHM [Kapalua / West Maui Airport] from HNL on July 1st. They will use their Cessna C208B Caravans for two daily round-trip flights. The airline also plans to add a fifth Caravan to their fleet.

More details in this Mokulele Airlines press release.
Posted by Blue Wave 707 at 07:35 No comments: 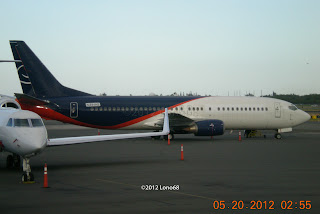 25594 was originally purchased by the First Security Bank of Utah, and leased to Malaysia Airlines as 9M-MLJ in February 1992. It was then leased to Istanbul Airlines [IL/IST] as TC-AVA in March 1993. LOT Polish Airlines [LO/LOT] was the next lessee in April 2000 as SP-LLH. AerGo Capital acquired the 737-4S3, and leased it to  Philippine Airlines as EI-CVO in November 2000. Nok Air [DD] (Thailand) was the next lessee, from Indigo, as HS-DDK. Wells Fargo purchased 25594, and leased it to Batavia Air in November 2008. 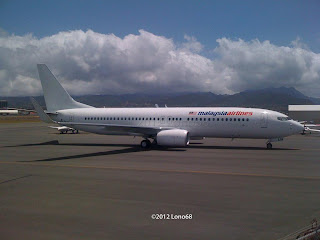 Malaysia Airlines is taking delivery of 9M-MLN (c/n 39324, l/n 4042) this morning. The 737-8H6 is flying as MAS5403. It maybe receiving a special livery once it arrives at KUL, as only the titles have been painted. 9M-MLN is seen above taxiing to the Castle & Cooke Aviation ramp after arriving from BFI.

With Malaysia Airlines putting a new livery on their A380 fleet, it appears that it has not been decided which livery this 737 will get. 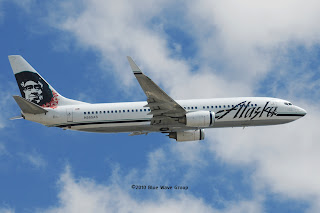 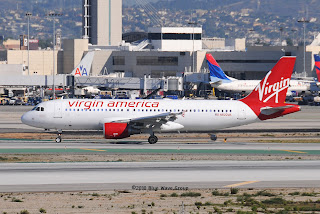 A Conde Nast Traveler blog is reporting that SFO-based Virgin America [VX/VRD] will soon be flying ETOPS proving runs between SFO and HNL. The article states that "the airline is in the early stages of ETOPS flights, but did not specify Hawai‘i".

More information in this Jaunted.com article.

Further details in this Allegiant Airlines press release.
Posted by Blue Wave 707 at 07:25 No comments: 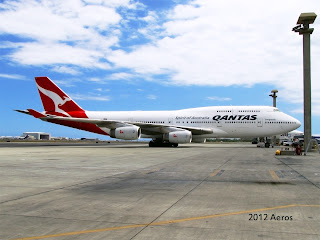 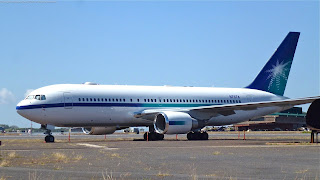 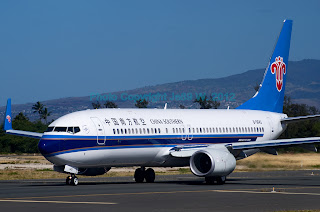 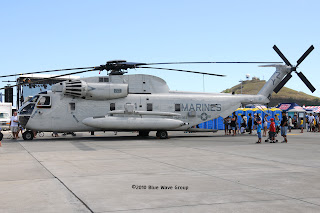 The HMH-363 "Lucky Red Lions" bid a fond aloha ‘oe (farewell) to the Sikorsky CH-53D Sea Stallion helicopter, in a retirement ceremony held at Marine Corps Base Hawai‘i this afternoon. The Heavy Marine Helicopter squadron will be transitioning to the Bell Boeing MV-22A Osprey Tilt-Rotor aircraft at NAS Miramar, CA for a three year training period, returning to Kāne‘ohe in 2015.

The "Lucky Red Lions" will be the first of the four CH-53D squadrons to transition to the MV-22A.

The above photo was taken at the 2010 Kāne‘ohe Bay Air Show.

More details in this Hawai‘i News Now article.
Posted by Blue Wave 707 at 22:53 No comments: 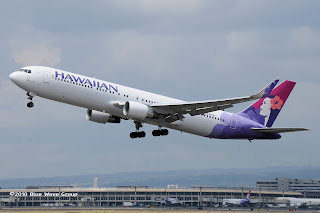 Hawaiian Airlines announced this morning that they will launch thrice-weekly service to CTS (New Chitose Airport, Chitose, Hokkaidō, Japan) on 01 November 2012. Service will begin with their 767-300ERs, and will feature their "Hawai‘i Flies With Us" in-flight service. Chitose becomes the airline's Japanese fourth destination.

The near-by city of Sapporo is the fifth largest city in Japan, and has had seasonal charters by Japan Airlines. Now, Hawaiian will launch regular-scheduled service between CTS and HNL. 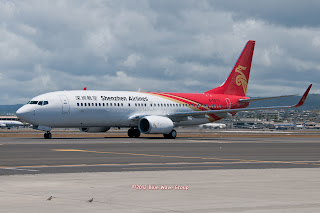 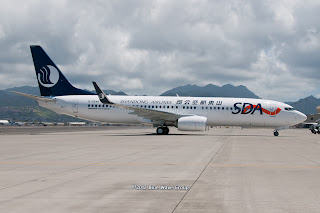 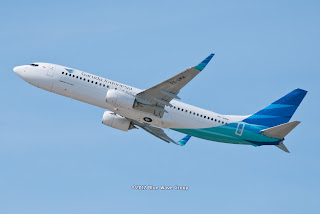 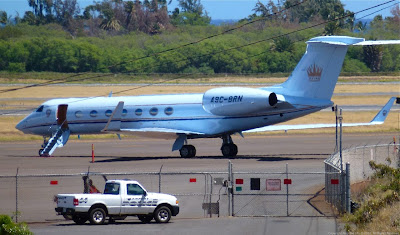 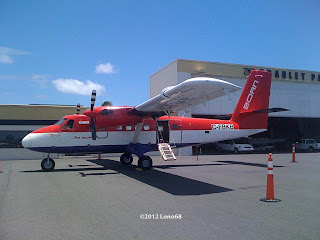 Mahalo to team member Lono68 for the above photo of C-FBKB on the Bradley Pacific ramp. The titles say air BORN, but not much is know about this carrier. 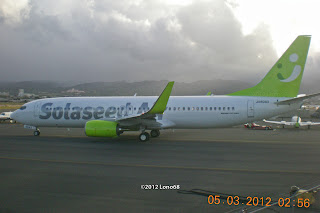 A big mahalo to team member Lono68 for the above photo of JA804X as it taxies out for departure to MAJ.

"Vintage Racer" also got a photo if it at BFI. 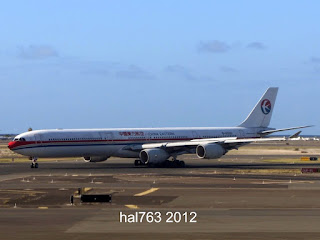 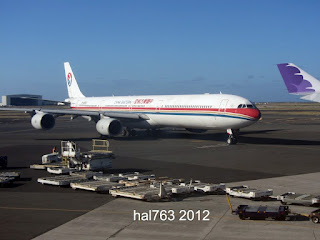 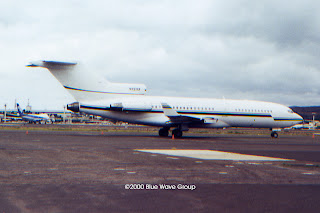 18323 was originally delivered to United Airlines as N7031U in April 1965. It spent over 13 years with UAL, before it was sold to Korean Airlines as HL7337, in August 1978. ATASCO Leasing was the next owner, purchasing the 727, and registering it as N1187Z in September 1985. Four months later, it was sold to World Airways (with the same registration), then sold to Air Atlanta [CRB] another four months later. After Air Atlantaʻs demise, it went to Ladeco Airlines (Chile) [UC/LCO] as CC-CIW in August 1987. ATASCO Leasing re-purchased the 727 in July 1992, and registered as N863SY. Three months later, 18323's interior was converted into a VIP transport as VR-BMC. Southwest Jet then purchased it in February 1999. Executive Jet Services (Democratic Republic of the Congo) was the next buyer to use the 727-22 as a VIP transport around Africa and Europe. It was registered as 3D-BOC (Swaziland) and S9-DBM (Sao Tomé & Principe), and wore the same livery as N727CF. In February 2010, Hewa Bora Airways [EO/ALX] (Democratic Republic of the Congo) purchased the jet, and converted back to a passenger (C12Y139) configuration, and registered as 9Q-COP. Sadly, this airliner and its passengers and crew were lost in a crash at FKI (Kisangani-Bangoka, DRC) on 08 July 2011, as it tried to land in bad weather.
Posted by Blue Wave 707 at 07:27 1 comment: