Kamaka Air is adding their sixth C208BF Grand Cargomaster, N208VV (msn 208B2308). It's making its delivery flight from VGT via SMX to OGG today. The airline will re-register this Caravan as N689KA upon arrival to HNL.
Posted by Blue Wave 707 at 13:14 No comments: 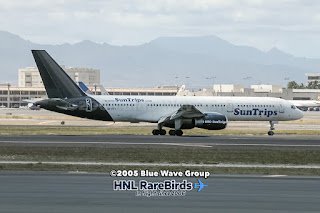 25488 was originally delivered to Air Transat in November 1992 as C-GTSE, under lease from Finova Capital Corporation. In January 2003, it was leased to Ryan International Airlines as N310FV. In March 2006, the Dart Group PLC [UK], acquired this 757, and assigned it to its airline, Jet2 as G-LSAC. In early 2013, G-LSAC was painted in the current Jet2 Holidays livery; and continues to fly for Jet2.
Posted by Blue Wave 707 at 07:52 No comments:

The HNL RareBirds wishes you all a Happy New Year (and Decade)!