Conair Aviation's RJ85 firebomber, C-GVFK (msn E2268, t/n 391), is making a stop at HNL as it heads to Australia for its summer forest fire fighting efforts. It's flying from YXX, and has made stops at OAK and HNL.

E2268 was originally delivered to Lufthansa Cityline in October 1995 as D-AVRH. In March 2012, Falko Regional Aircraft acquired it as G-OCLH. Aerial firefighters Aero-Flite acquired the RJ85 in December 2015 as N223AC. Conair acquired it this past February as C-GVFK.
Posted by Blue Wave 707 at 14:48 No comments: 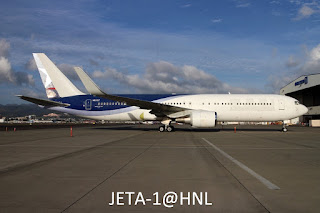 25685 was originally ordered by Canadian Airlines International, as C-GCAW, but was not taken up, and was sold to Guinness Peat Aviation in April 1992. In November 1992, it was leased to China Southern Airlines as B-2561, but was subsequently sold to GECAS in October 1996, and remained with CSN. In January 1997, it was leased to LAN Chile as CC-CRG.  In September 2004, CIT Leasing acquired this 767-375ER, and it remained under lease with LAN, until October 2014. During its time with LAN, it was transferred to LAN Argentina from December 2008 to October 2010 as LV-BTE. In January of this year, Atlas Air acquired this 767 as N258CT, and re-registered it as N631GT, but was stored at MZJ.
Posted by Blue Wave 707 at 23:05 No comments: 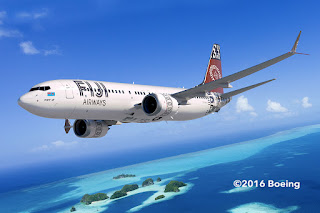 Boeing and Fiji Airways announced that the airline will order five 737 MAX8s as replacement for its current 737NG fleet. The first two are slated for delivery in 2018.

Further details in this Airways Magazine article.
Posted by Blue Wave 707 at 11:42 No comments: 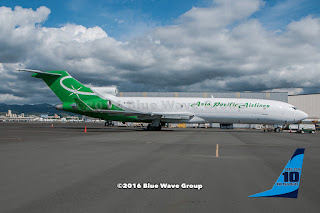 The Island Air Explorer program has been in existence for the past several years. The annual program is open to high school and college students who are seeking a career in the aviation industry.

Further Information in this Island Air press release.
Posted by Blue Wave 707 at 09:21 No comments: 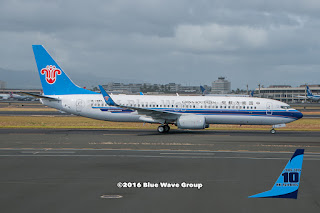 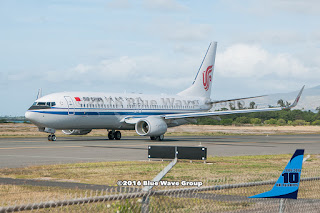 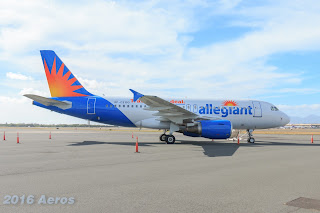 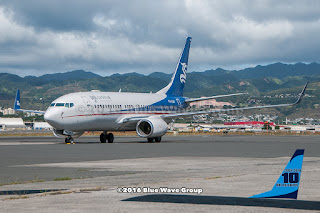 30751 was originally delivered to GKW Aviation in October 1999 as N800GK, then re-registered in June 2000 as N888GW. In August 2001, Silver Arrows acquired this BBJ, as P4-GJC, and operated it for Russian magnate Roman Abramovich. In February 2005, Ivanhoe Capital Aviation purchased 30751 as VP-BMC; then sold it in September 2005 to Hualalai LLC, as N888NY, and leased it to Clay Lacy Aviation. Legatum Aviation acquired it in March 2008, and registered as N737L. Sino Jet acquired it this past August.
Posted by Blue Wave 707 at 10:39 No comments: 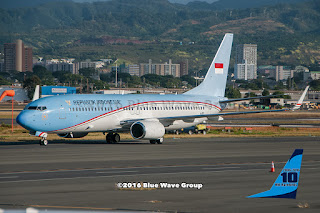 The fifth-ranked University of North Carolina Tar Heels men's basketball team chartered a Sun Country 737-800 for its road trip against the University of Hawai‘i Rainbow Warriors. N821SY brought the Tar Heels from RDU to HNL (via LAX) as SCX8661; the aircraft returned to LAX as SCX8662, as the team will stay for the Maui Jim Maui Invitational basketball tournament, that begins on Monday, November 21st.
Posted by Blue Wave 707 at 23:02 No comments:

N81GG (msn 100346D), a Hughes 369D owned by local attorney Gary Galiher, crashed on Molokaʻi yesterday, and claimed the lives of Galiher and a passenger.

Our condolences and prayers go out to the Galiher ʻohana and his passenger's ʻohana.
Posted by Blue Wave 707 at 22:43 No comments: 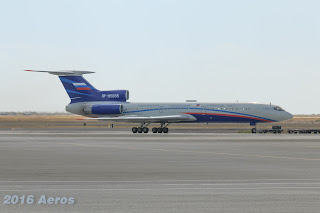 A TU-154M of the Russian Air Force arrived this afternoon. RA-85655 (c/n 89A798) visited a year ago in December. It flies under the "Open Skies" Treaty which promotes the international aviation industry.
Posted by Aeros at 19:10 2 comments: 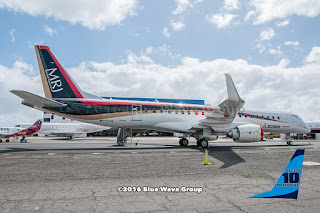 Mitsubishi's MRJ90, JA24MJ (msn 10004) has made a stop at HNL, as it makes its way from NKM [Nagoya, Japan] to MWH [Moses Lake, WA]. This MRJ90STD is the second test aircraft to ferry across the Pacific for testing and certification.
Posted by Blue Wave 707 at 06:20 No comments: 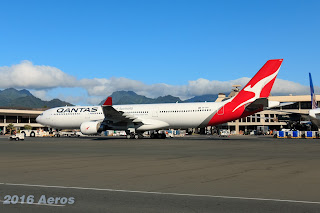 After getting a new coat of paint in Victorville, California, VH-QPH (msn 695) is making its way back to BNE as QFA6004. The new livery update coincides with Qantas' 787 operation starting up in late 2017.
Posted by Aeros at 20:52 No comments:

Bombardier's CS300 Flight Test Vehicle 8, C-FFDO, is back at HNL from a non-stop flight from HND, and due to return to the mainland. While in Asia, it stopped at ZUH and HND.
Posted by Blue Wave 707 at 06:14 No comments: 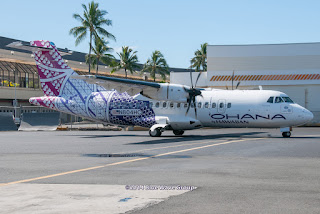 Hawaiian Airlines announced today that the airline will resume daily service between HNL and JHM (2 round-trips) and OGG and JHM (1 round-trip), using their ‘Ohana by Hawaiian subsidiary, beginning on January 18, 2017.

Hawaiian Airlines built and operated JHM from 1987 to 1993 using Dash7s, before selling the airport to the state.

Further details in this Hawaiian Airlines press release.
Posted by Blue Wave 707 at 18:42 No comments: 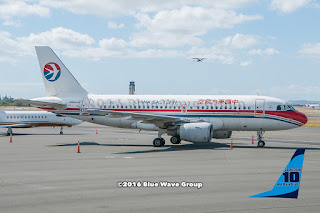 China Eastern Airlines is returning one of their leased A319-112s. Registered now as 2-ADET (msn 1601), is ferrying from PVG to the US mainland to Castlelake Leasing. It was delivered to China Eastern in October 2001, under lease from GECAS. In August 2004, it was sold to Novus Aviation Capital; and sold to Castlelake, some time in 2013. photo to follow ...
Posted by Blue Wave 707 at 13:12 No comments: 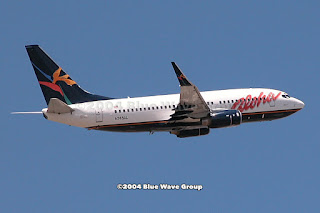 29905 was originally purchased by GECAS, and leased to LAPA [MJ/LPR] (Argentina) in October 1999 as LV-ZRP. In October 2002, it was leased to Aloha Airlines as N746AL, with Blended Winglets added a year later. It flew with Aloha, until the airline's closure in March 2008. In October 2008, it was leased to VARIG as PR-VBU, operated by GOL. The ownership was transferred to AerCap in 2009. In 2013, it was integrated into GOL's fleet, and continues to fly in Brazil.
Posted by Blue Wave 707 at 07:46 No comments: