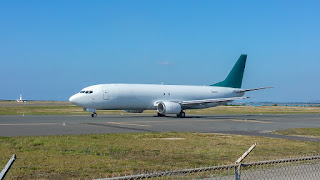 24434 was originally delivered to Australian Airlines in September 1990 as VH-TJI. It was leased to Malaysian Airlines as 9M-MLD in October 1990, for two years. It was also leased to Air Vanuatu from November 1992 to March 1998. A month later, it joined the Qantas fleet, and named "Cloncurry". It flew for Qantas until February 2014, and was ferried to VCV. After it was converted to a freighter at DHN late last year, it was sold to Toll Airwork.
Posted by Blue Wave 707 at 15:44 No comments: 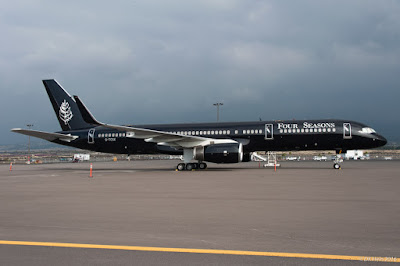 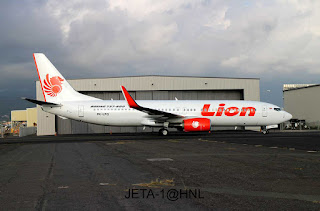 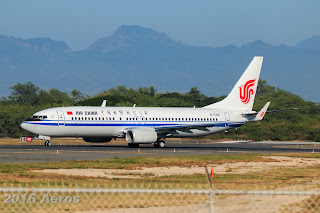 Hawaiian Airlines and Turkish Airlines have entered into a codeshare agreement, where the latter carrier will add their THY flight code to the former's KIX and ICN flights.

Further details in this Hawaiian Airlines press release.
Posted by Blue Wave 707 at 15:44 No comments: 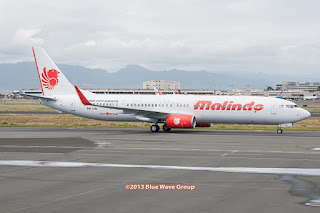 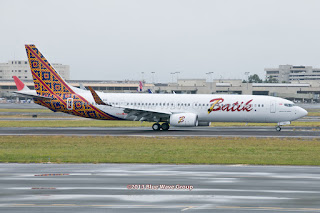 The Lion Group announced that the Malindo Air brand will be re-branded as Batik Air Malaysia, as it moves to become a full-service airline, like its Indonesian sister airline.

Further information in this CH-Aviation article.
Posted by Blue Wave 707 at 09:09 No comments: 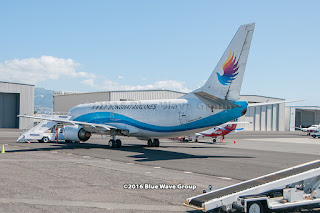 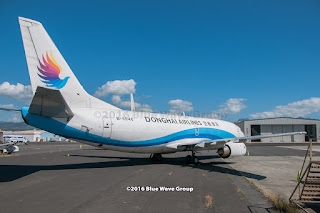 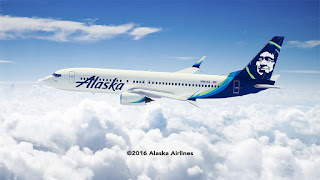 Today, Alaska Airlines revealed its first major re-branding in the past 25 years. The airline unveiled one of their 737-890s, N563AS (c/n 35180, l/n 2090), before a large group of airline employees at their SEA headquarters. Alaska's airport locations will also see the re-brand over the next several months, as well.

Further details in this Alaska Airlines press release.
Posted by Blue Wave 707 at 14:15 No comments:

KOA To Be The Next International Hub

In Hawai‘i Governor David Ige's State of the State address, he noted that he intends to designate KOA as the next major international destination airport in the state, through Capital Improvement Program funding. KOA's current international flight is by Westjet Airlines from YVR.

Japan Airlines conducted non-stop in-bound flights from NRT to KOA between 1996 and October 2010 with 747s and DC-10s, with return flight stopping over at HNL. In recent years, Hawaiian Airlines has made several applications for non-stop flights between KOA and HND in response to disputes with gate slots by other American carriers; to date however all of these applications have been denied and awarded to competitor airlines.

Governor Ige said he will also seek funding to modernize the passport control system for HNL, as well as general modernization for Hawai‘i airports.
Posted by Blue Wave 707 at 11:44 No comments: 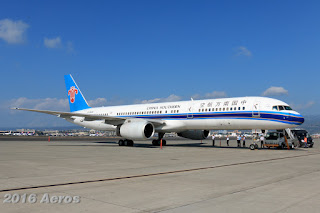 In a sales agreement between Boeing and China Southern Airlines, three 737-300s, and the 13 remaining 757-200s owned by China Southern will be bought back by Boeing. The buy-back of older airframes comes along with the news that China Southern has purchased 30 more 737-700/800s and 50 737 MAXs. 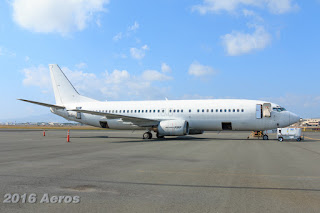 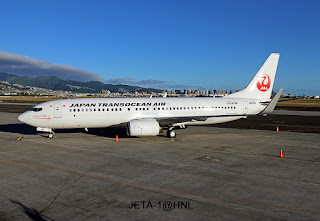 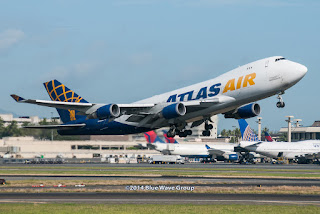 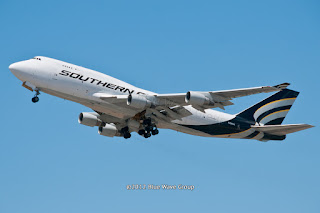 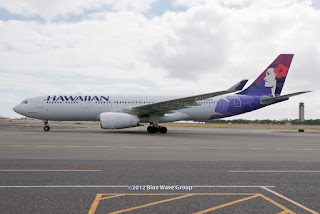 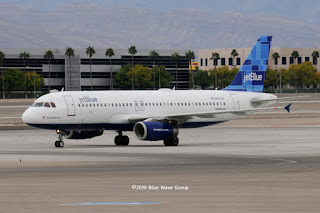 Hawaiian Airlines announced that they, and jetBlue Airlines are expanding their codeshare agreement, that will result in further routes that Hawaiian will have the JBU flight code associated with Neighbor Island service, as HAL flight codes on jetBlue's mainland network, where the two airlines have the same destination.

Further information in this Hawaiian Airlines press release.
Posted by Blue Wave 707 at 09:16 No comments: 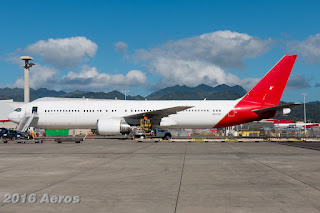 12 Marines aboard two Sikorsky CH-53E Super Stallions are missing after the two helicopters collided off of Hale‘iwa last night. The Marines and the helicopters are from the 463rd Marine Heavy Helicopter Squadron (HMH-463) / 1st Marine Air Wing (MAW) at MCAF Kāne‘ohe Bay. Debris has been spotted a few miles offshore, and many agencies are participating in the search. The thoughts and prayers of the entire HNL RareBirds team goes out to all those involved in this incident.

WestJet Starts Own 767 Operations to Hawai‘i 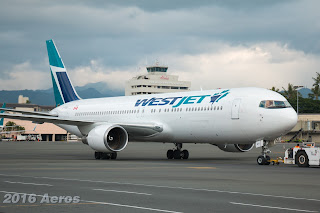 WestJet Airlines started their seasonal 767-338ER operations to Hawaii‘ this past Sunday from Canada. C-FOGJ  (c/n 25274, l/n 396) is one of four ex-Qantas 767-388ERs that WestJet acquired to add capacity for it's Hawai‘i network. They also plan to expand to Europe and Jamaica later this year with their 767s.

Omni Air International 767-200s were wet-leased in the beginning of this winter season until Westjet's own 767-338ERs completed ETOPS certifications.
Posted by Aeros at 07:00 No comments:

USA Today reports the Hawaiian Airlines CEO Mark Dunkerley revealed to the Maui Chamber of Commerce that the airline intends to expand operations at OGG in the near future, as it will begin receiving A321neos in 2017. With 16 of the new engine version of the A321, Dunkerley said that Hawaiian will expand more mainland flights from OGG, and other Neighbor Island airports to the US west coast, along with routes from HNL to smaller markets. 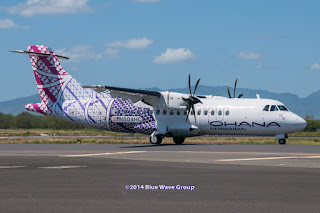 On another note, Hawaiian will return to JHM with their ‘Ohana by Hawaiian subsidiary, once the Hawai‘i Department of Transportation installs Precision Approach Path Indicator (PAPI) lights on JHM's Runway 2/20, and certified by the FAA. No launch date was given. 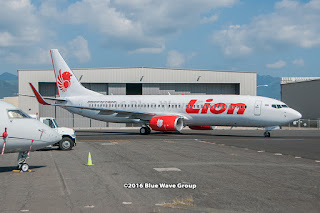 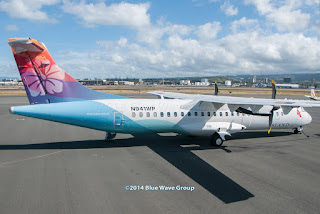 The Honolulu Star*Advertiser is reporting that two PacifiCap affiliates will be purchasing a controlling share of Island Air from Larry Ellison, a week after the sale was announced. Included in the article, is a plan to add a sixth ATR72.
Posted by Blue Wave 707 at 14:50 No comments: 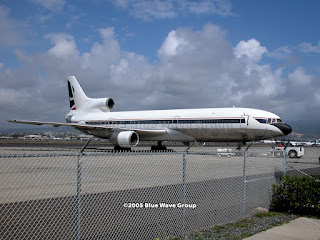 N722DA was delivered to Delta in November 1977 from the Lockheed plant in Palmdale, CA, and served with the airline until October 1998, where it was placed into storage at VCV. It was sold to Jet Midwest in April 2004, then J&J Holdings (Hong Kong) seven months later. It made a ferry flight from VCV to CAN (via OAK and HNL) for an overhaul. It joined the Thai Sky Airlines in February 2005, but was withdrawn from use in April 2006, and was stripped for spare parts. It's assumed that this TriStar has been scrapped.
Posted by Blue Wave 707 at 10:11 No comments:

The HNL RareBirds team wishes you all a Happy New Year! May you all have a blessed and prosperous 2016!

This year is also our website's 10th Anniversary! We will be unveiling a commemorative logo in the immediate future.
Posted by Blue Wave 707 at 00:00 No comments: