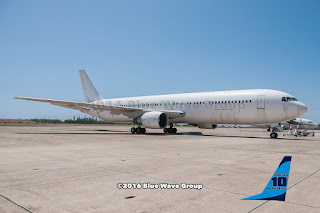 N24848 (c/n 24848, l/n 325), a 767-383ER owned by Well Fargo Bank Northwest, is ferrying from BKK to ROW as JTN5126, and is making an overnight stop at JRF. It was most recently with Business Air [8B/BCC] (Thailand), but has been in storage at BKK since the airline's shutdown in January 2015. Upon landing at JRF, it was noted that the two center windshields suffered cracks on the outer pane, but the crews feel it's safe enough to continue on to ROW.

24848 was originally delivered to SAS Scandinavian Airlines in September 1990 as SE-DKS, and re-registered as OY-KDN two months later. In October 2003, it was sold to Babcock & Brown Aircraft Management, and leased to Arkefly [OR/TFL] (Netherlands) as PH-AHY, to which it was subleased to Air Holland [GG/HLN] (Netherlands) for four months, then leased to BelgiumExel [HXL] for 11 months, then to Vietnam Airlines [VN/HVN] for three months before to would fly for ArkeFly (June 2005). It flew for the Dutch carrier until October 2010, when it placed into storage at SNN until January 2011. In March 2011, it was delivered to Business Air as HS-BID, and flew until the airline's shutdown in January 2015. The airline rebranded itself as Intira Airlines in July 2015, but has yet to begin operations, even though their website claims to start service in October 2015. WFBN acquired this 767 in February 2016 as N24848.
Posted by Blue Wave 707 at 11:32 No comments: 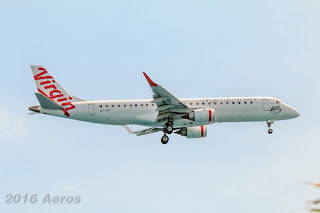 Another monthly transit of a Virgin Australia EMB-190 arrived today from Brisbane via Apia, Sāmoa as VOZ9901. VH-ZPF "Whitehaven Beach" (c/n 19000193) will continue on to Embraer's Maintenance facility in Nashville, TN, via Van Nuys, CA.
Posted by Aeros at 20:22 No comments:

Honolulu Civil Beat reports that the ACLU and the State Attorney General's Office agreed that amateur aviation photographers and the general public can photograph aircraft from public property around HNL.

Further information in this ACLU Hawai‘i press release.
Posted by Blue Wave 707 at 22:54 No comments:

MCAF Kāne‘ohe Bayʻs Patrol Squadron 4 (VP-4) "Skinny Dragons" P-3C Orions have begun their "Aloha Deployment". Upon return form their deployment, they will transition to the P-8A Poseidon, and relocate to NAS Whidbey Island, WA. The "Skinny Dragons" are the first of three P-3C squadrons based at MCAF Kāne‘ohe Bay to make the transition and the move, and ends a 50-year run being based on O‘ahu. US Navy anti-submarine aircraft were once based at the now-closed NAS Barbers Point (now the Kalaeloa Airport).


Further details in this Navy.mil article.
Posted by Blue Wave 707 at 11:07 No comments:

Our thoughts and prayers go out to those injured and killed, and their families and friends, in the terrorist attacks on BRU [Brussels National Airport, Zaventem, Belgium] and the Maelbeek Metro Station, this morning.
Posted by Blue Wave 707 at 15:46 No comments: 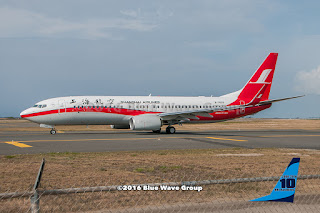 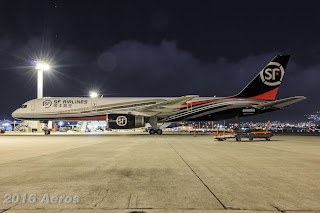 24443 was originally delivered to Australian Airlines in November 1992 as VH-TJR. After the merger with Qantas in 1993, it was transferred to the latter's fleet that October, and named "Cockatiel". It was withdrawn from the Qantas fleet in October 2013, and ferried to VCV two months later. It was ferried to DHN for freighter conversion in May 2015.
Posted by Blue Wave 707 at 12:06 No comments: 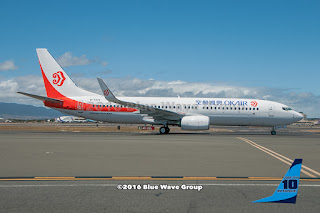 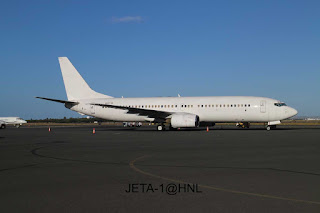 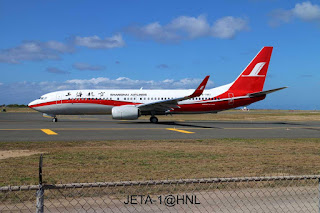 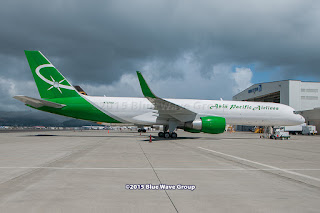 Asia Pacific Airlines has put N757QM into service, after receiving its clearance from the FAA. Flying as MGE757, it has been flying freight between HNL, GUM and MAJ.
Posted by Blue Wave 707 at 11:35 No comments: 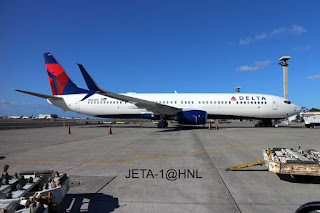 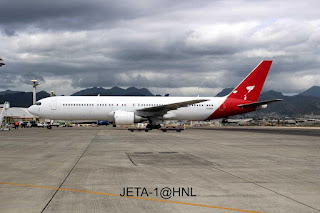 28724 was originally delivered to Qantas Airways in June 1997 as VH-OGR "City of Corowa", and served with Australian flag carrier until September 2014, when it stored at ASP. In November 2015, it was ferried to VCV, sold to WFBN, and converted to a freighter. It was sold to SF Airlines, and will receive its Chinese registration upon delivery.
Posted by Blue Wave 707 at 07:06 No comments:

33017 was purchased by CIT Leasing, and leased to Virgin Blue, then subleased to Pacific Blue in February 2004 as ZK-PBC "Missy Mainlander". A year later, it was returned to Virgin Blue as VH-VOX "Missy Mainlander". In May 2011, when Virgin Blue and V Australia were consolidated as Virgin Australia, VH-VOX was transferred over, and renamed "Coolum Beach". It was withdrawn from service in December 2015, and ferried to CGK for storage in January 2016. 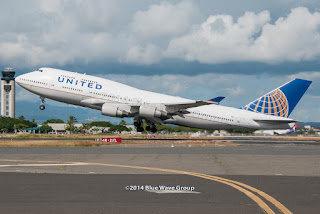 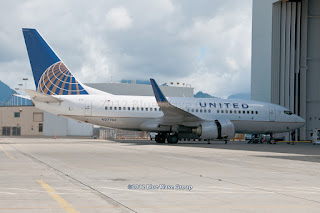 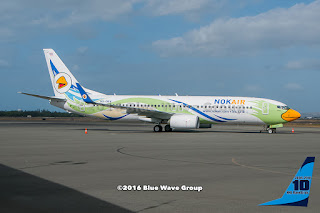 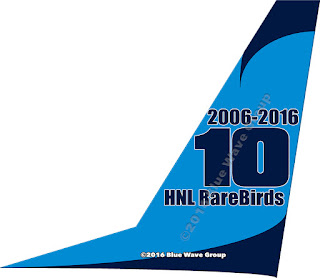 Today, we are unveiling our HNL RareBirds 10th Anniversary logo, that will be our profile photo for our social media accounts (Twitter and Facebook), and our email icon.
Posted by Blue Wave 707 at 11:36 No comments: 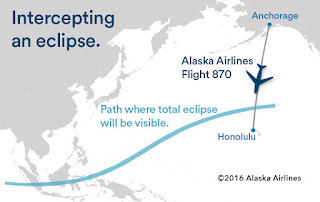 Today's Alaska Airlines flight ASA870, from ANC to HNL, will have the distinction of flying through the shadow of a total solar eclipse, of which the path is north of the Hawaiian Islands. To make the window of the solar eclipse, ASA870's departure from ANC will be delayed by 25 minutes. N459AS (c/n 36352, l/n 4832), a 737-990ER, is making the flight.

Further information is in this Alaska Airlines blog post.
Posted by Blue Wave 707 at 10:16 No comments: 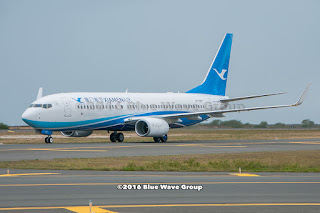 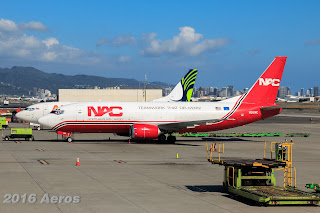 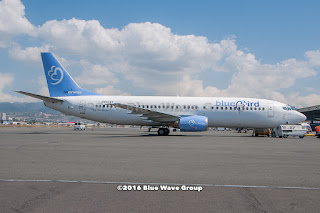 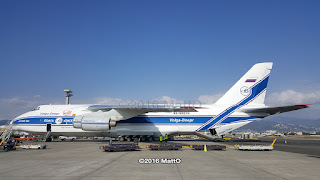 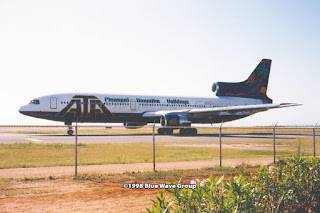 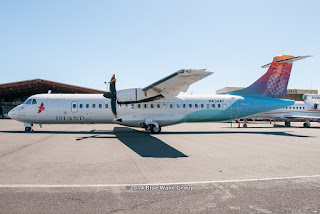 Island Air announced today that they will discontinue service to LNY on March 31, 2016, as part of the restructuring of the airline.

Further information in this Island Air press release.
Posted by Blue Wave 707 at 10:06 No comments: