A USAF 747 carrying Defense Secretary Robert Gates landed at HNL, and taxied to HIK. Gates met with the Pacific Command and the media.
Posted by Moku Pics at 09:14 No comments: 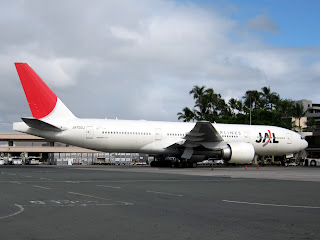 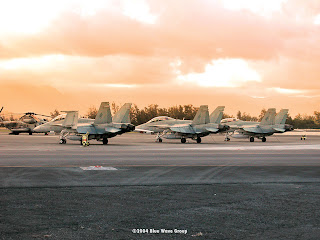 On this day, we honor those brave and valiant men and women who paid the ultimate sacrifice in the defense of our country (in the past, and the current) from evil tyrants bent on destroying the freedoms given to us by God and our founding fathers. 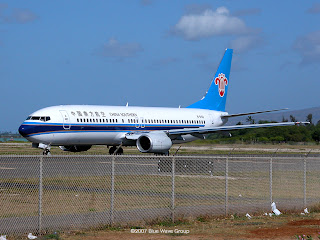 Today saw the visit of yet another Lion Air (Indonesia) 737-900ER. PK-LFG is likely the 2nd to be delivered since -LFF was the first one off the production line. The aircraft was serviced at Air Service on the South Ramp and was seen with the airstairs and position lights on at approximately 1930 local. Dressed in the Dreamliner livery with Lion Air's white vertical stabilizer and red Lion logo, it wears a large Boeing logo on the forward fuselage as well as a prominent "737-900ER" title. Hopefully someone got a photo of it!
Posted by Moku Pics at 21:02 No comments: 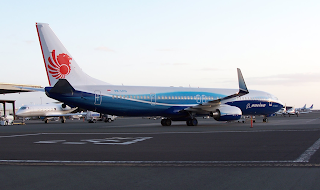 PK-LFG seen sitting in front of ASH in full Dreamliner livery.
Posted by Aeros at 17:39 No comments: 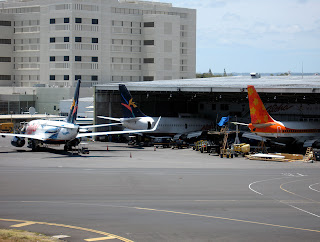 What is interesting in this picture is N823AL. AQ is doing some major maintenance on this bird. It has a tail stand and a stand under the left horizontal stablizer. If you look at the ground, below the aircraft, you can see a replacement horizontal stablizer.
Posted by hal763 at 15:13 3 comments:


Here's the picture of VH-EBT parked at the hard stand. All titles and logos were removed, even from the engines. The only thing left is the tail of the kangaroo on the rudder. 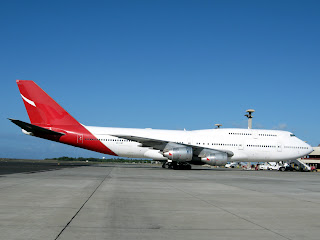 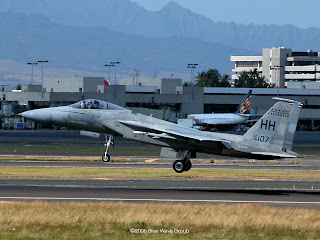 In 1950, President Harry S. Truman designated the third Saturday in May to be called Armed Forces Day, recognizing those who serve our country. In honor of our men and women fighting to protect our freedoms, today's photo is of a Hawai‘i Air National Guard F-15A "Eagle" (76-0107) from the 199th Fighter Squadron, taking off from HNL's Runway 22L. We thank you for your service and defending our freedoms.
Posted by Blue Wave 707 at 00:07 No comments: 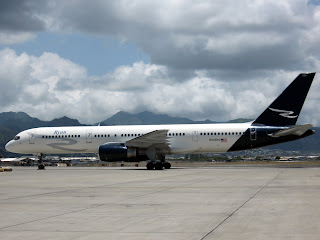 Ryan International, the U.S. based charter carrier, is a regular visitor to HNL, but usually does turns. They do however, have an aircraft RON once in a great while. Today just happened to be one of those days. So, here's N526NA parked at the North Ramp hard stands.
Posted by hal763 at 19:12 No comments: 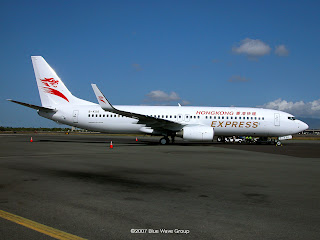 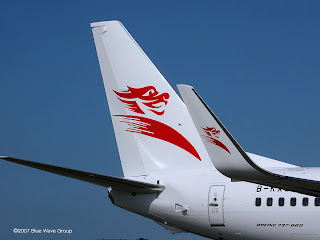 It's seen here getting ready for its departure to MAJ. In the above photo, it shows that the tail logo is also painted on the Blended Winglets. The previous delivery, B-KXF, still had the original teal HKE colors on its Blended Winglets.
Posted by Blue Wave 707 at 10:39 No comments: 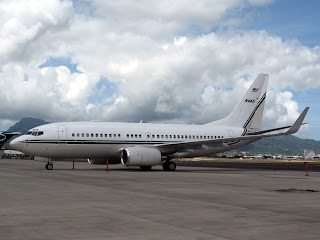 The fourth 737-700 is this 737-74U is a BBJ owned by Air Shamrock and Roy E. Disney. It was parked on the North Ramp and may have come from Van Nuys, CA (VNY), as that is where this aircraft is based. N4AS doesn't show up on FlightAware as they have requested not to be listed.
Posted by hal763 at 18:34 1 comment: 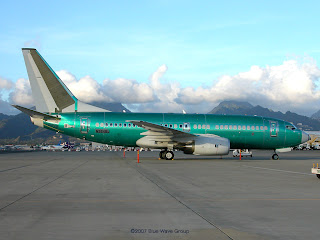 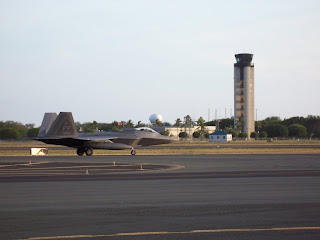 Around 5pm 5/9, a flight of 6 Raptors based at Langley AFB arrived in HNL. 03-052 seen here taxing back to Hickam AFB. My guess would be that these Raptors are returning home after their time Japan.
Posted by Aeros at 11:33 1 comment: 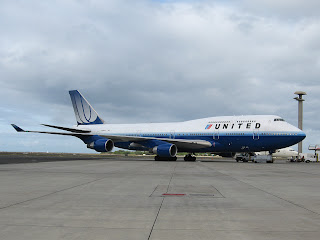 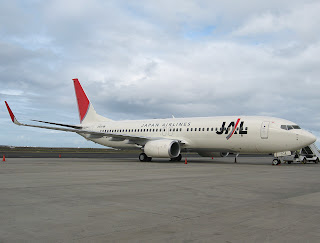 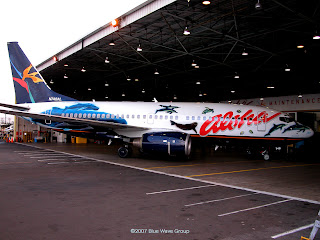 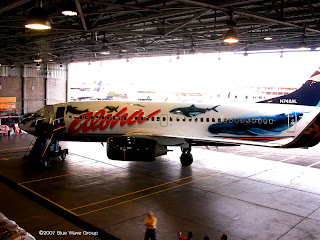 Aloha's 737-76N(W), N748AL "Koholālele" (c/n 30050), was unveiled to the media, employees, and the general public this morning in the AQ hangar. This 737 was painted by Wyland, the premier marine artist, in two days. "Koholālele" (Flying Whale) received a traditional Hawaiian prayer and blessing by Kahu Danny Akaka Jr, and is scheduled to enter service tomorrow.

In the starboard view (top), from tail to nose: mother & baby humpback whales, a pair of spinner dolphins, Hawaiian monk seal, a green sea turtle, two pairs of reef fish, another trio of spinner dolphins, and a flying fish. In the port side view (above): a humpback whale, a tiger shark, an Laysan albatross, a green sea turtle, Hawaiian monk seal (that greets boarding passengers), a humuhumunukunukuapua‘a (Hawai‘i's state fish), and a pair of bottlenosed dolphins.

It was definitely an honor and privilege to document this historic event, and work along side an artist of Wyland's caliber. Kudos go out to the AQ crew who helped Wyland accomplish this feat.
Posted by Blue Wave 707 at 12:43 No comments: 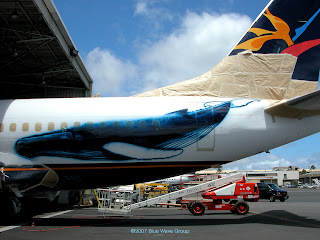 World-renowned marine artist Wyland, was commissioned by Aloha Airlines to paint one of their 737-700Ws, N748AL (c/n 30050). The aircraft just returned from a re-painting in Washington, and became the "$100million canvas", as Wyland stated. Local marine life is depicted on both sides of this 737-76N(W). The aircraft was also given a new name, Koholālele (Flying Whale). 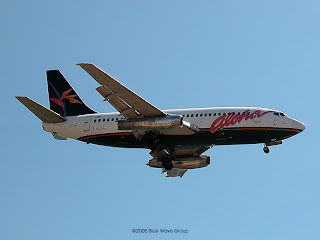 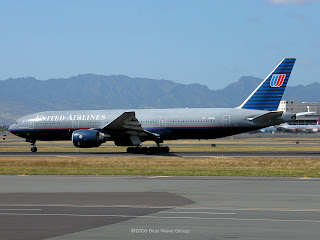 Aloha Airlines and United Airlines (UA) have increased their partnership and code-share agreement. The Honolulu Advertiser's coverage of this announcement. 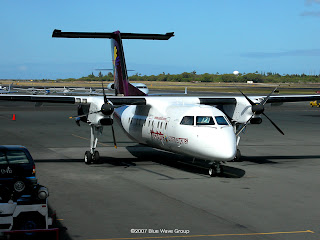 Island Air has sold one of their Dash8-103s, N811WP (msn 366) to United Airways (BD) Ltd, a new airline based in Bangladesh. It arrived today from the paint shop in the new colors. It's Bangladesh registration is unknown.
Posted by Blue Wave 707 at 14:54 1 comment: