Batik Air Malaysia is taking delivery of 9M-LRL (c/n 43012, l/n 7655) today. This 737-8, in the Lion Air livery, is making its delivery flight from BFI to KUL, via HNL and GUM, as MXD1. It was originally intended for Lion Air, but was transferred to its sister-airline Batik Air Malaysia.
02 Oct 22 UPDATE
9M-LRL's leg to GUM was delayed to today, and left this afternoon.
Posted by Blue Wave 707 at 14:47 No comments:

Nomadic Aviation is ferrying VP-CWQ (msn 19000154) from CRK to ROW, via GUM, MAJ, HNL, and ONT, as OMD263. This ERJ-190AR was with Myanmar National Airlines as XY-AGP. It was due to make a gas & go fuel stop here, but ended up overnighting.
19000154's History:
Mar 2008: Delivered to Sky Air World as VH-SXK, under lease from GECAS.
Aug 2009: Leased to Republic Airlines as N161HL, and assigned to Midwest Airlines.
It was due to be assigned to Republic's Mokulele Airlines operation but reassigned to Midwest.
Oct 2010: Republic assigns to Frontier Airlines in the "Clover the Fawn" tail livery.
Jan 2013: Leased to Myanma Airlines as XY-AGP.
Dec 2014: Airline rebrands as Myanmar National Airlines, lease transferred.
Nov 2021: Sold to AerCap, and lease transferred.
Jun 2022: Withdrawn from service, and ferried to CRK for storage.
photo to follow ...
29 Sep 2022 UPDATE
VP-CWQ will be staying at HNL due to a maintenance issue.
15 Oct 2022 UPDATE
VP-CWQ continued onto ONT this morning as OMD263.
Posted by Blue Wave 707 at 21:19 No comments: 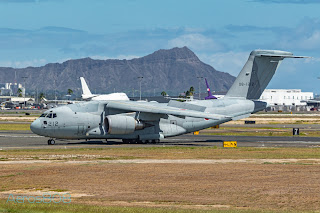 08-1212 (msn 12), a Kawasaki C-2 of the Japan Air Self-Defense Force, is making a stop at HNL for training flights. The medium-heavy transport is assigned to the 403rd Tactical Airlift Squadron / 3rd Tactical Airlift Group, based at YGJ [Miho Airbase / Yonago Airport]. It's flying as JF403, and arrived from YGJ, with a stop at OKO, this morning.
Posted by Blue Wave 707 at 10:56 No comments:

Air Archipels is taking delivery of their second Beech Super King Air 200, N402BY (msn BY-402). It’s making its delivery flight from MCE to PPT, via HNL; and will be registered as F-OIPF after its delivery flight. The US registration belongs to the Gateway Air Center.
26 Sep 22 UPDATE
N402BY is making its leg to PPT this morning.
photo to follow ...
Posted by Blue Wave 707 at 21:11 No comments: 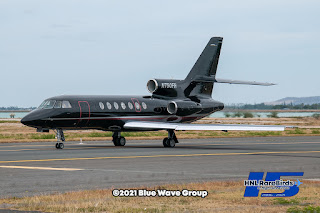 Luna Jet's Falcon 50, N750FR (msn 098), made an appearance in tonight's episode of the CBS TV serial, "NCIS Hawai‘i". The black Falcon 50, operated by Mid-Pacific Jets, was used as a transport for a federal fugitive escaping to Hawai‘i. The scene in "Prisoner's Dilemma", was filmed at the Kalaeloa Airport this past June. The episode, "NCIS Hawai‘i" second season premier, was part two of the crossover episode with "NCIS" season premier episode "A Family Matter".
Posted by Blue Wave 707 at 22:14 No comments: 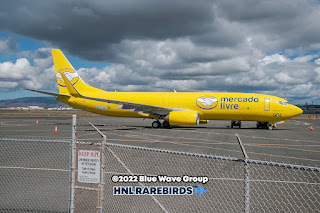 Mercado Livre is taking delivery of N272GE (c/n 34279, l/n 2061), as it makes its delivery flight from PVG TO CNF, via GUM, HNL, VCV, and SJO, after freighter conversion. This 737-8EHF, to be operated by GOL Linhas Aéreos, will be part of the Uruguay-based online marketing company. The next leg of the delivery flight is to VCV. It will be registered as PS-GFB, after it arrives in Brazil.
34279’s History:
Sep 2006: Delivered to GOL as PR-GTF, under lease from GECAS.
Jly 2011: Painted in the GOL 10 Años special livery.
Dec 2013: Repainted in the regular livery.
Jly 2021: Withdrawn from service, and stored at CNF.
Nov 2021: Sold to AerCap, re-registered as N272GE, and ferried to PVG for freighter conversion.
Posted by Blue Wave 707 at 22:17 No comments:

Life Save Kūpono Shuts Down 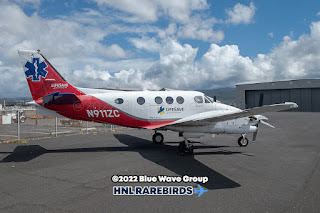 Air Method, the parent company of Life Save Kūpono, one of two inter-island air ambulance services in Hawai‘i, has closed Life Save Kūpono's doors today. It was one of several of Air Method's subsidiaries to be shuttered due to inflation, and reduced Medicare compensation.
Life Save Kūpono has four Beechcraft King Air C90As: N911ZC (msn LJ-1557), N911ZD (msn LJ-1559), N911ZE (msn LJ-1358), and N911ZF (msn LJ-1515) based at the Castle & Cooke Aviation hangar; along with a couple of ambulances.
The closure leaves Hawai‘i Life Flight, operated by American Medical Response (AMR), as the sole inter-island air ambulance service
Further information in this KHON2 article.
Posted by Blue Wave 707 at 22:22 No comments:

The Western Kentucky University Hilltoppers football team chartered an Omni Air International 767-200 for their road trip to play the University of Hawai‘i Rainbow Warriors. The team flew from BNA to HNL as OAE9234, and will return to BNA after the game under the same flight number.
Posted by Blue Wave 707 at 21:30 No comments: