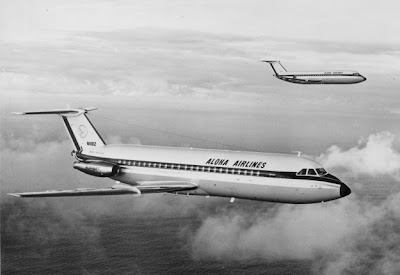 Aloha Airlines took delivery of its first BAC-111 on April 16, 1966. Flying from London, the aircraft set two world records enroute to Honolulu. The BAC-111's served Aloha until the summer of 1969 when they were withdrawn in favor of the new Boeing 737 "Funbirds".
Posted by naugusta at 07:20 2 comments:

Labels: Aloha Airlines, BAC 1-11, Blast From The Past, Classic, Vintage

Whether it corresponds with North Korea's sabre-rattling or not is up for debate but Hickam has been a very busy place recently. A number of KC-135R tankers have arrived and departed from numerous bases on the mainland and 6 F-22 Raptors from Langley AFB, VA (tail code FF) were accompanied by another half dozen yesterday afternoon. 5 of the first 6 departed today around noon, with one left behind likely due to maintenance.

The sight of a pair of C-2 Grayhounds coming and going over the past few days meant that a carrier was near. Yesterday, the 28th did indeed see an aircraft carrier steam into Pearl Harbor late in the morning with a deck full of F-18 E/F Super Hornets.

Also of note was a US Marine Corps C-130 that departed yesterday and returned not long after on the LDA approach, landing on runway 26 right with the #1 propeller feathered and crash-rescue trucks following them back to Hickam as a precaution.

Sorry, no photos due to the poor weather conditions.

Labels: US Air Force, US Marines, US Navy 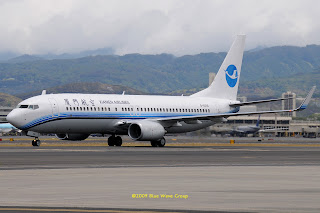 There's also a related photo on my Blue Wave Pix photo blog that I posted after the 737 parked.
Posted by Blue Wave 707 at 12:12 No comments: 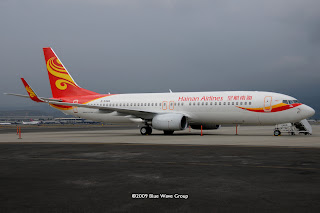 Earlier this week, N834AL, painted all white, was parked in the Aloha Air Cargo hangar. It was a little suspicious as the registration was in red instead of the normal dark blue. Here is a picture of what it looked like yesterday, May 27. 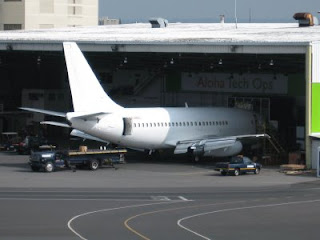 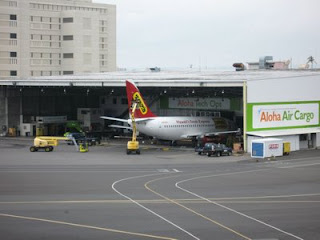 The Love's Bakery livery is only on the starboard side of the aircraft. The tail is painted red with the Love's name on its typical yellow background. The words "Hawaii's Fresh Express" are on the rear part of the fuselage with the iconic red and white checkerboard Love's logo on the front part. The engine is also painted red, with "Aloha Air Cargo" in white. The port side is painted in the new Aloha Air Cargo livery.

See another picture in the Honolulu Advertiser
Posted by hal763 at 16:20 3 comments:

While working at Magic Island on the Lantern Floating broadcast crew, I also saw a Polet Flight An124-100, and a white tail 737-800(W) make finals for Runway 26L. For most of the day the traffic pattern were Kona Winds, until the late afternoon.
Posted by Blue Wave 707 at 22:10 1 comment: 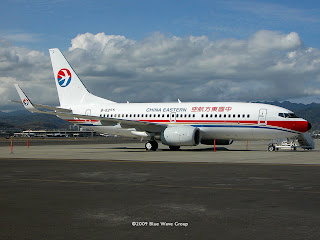 Lion AIr International has taken delivery of its second 737-9GPER(W) this month, PK-LFZ (c/n 35726). As usual, it just stopped briefly for fuel before continuing onto MAJ earlier today

U.S. Bankruptcy Judge Lloyd King has basically blocked Yucaipa from bidding on the auction of the Aloha Airlines intellectual property. Yucaipa planned to license the Aloha Airlines brand to Mesa, who was then going to re-brand go! as Aloha Airlines as part of the settlement of the lawsuit originally filed by Aloha in 2005 and bought by Yucaipa . In his ruling, Judge King considered Mesa as a co-purchaser with Yucaipa due to the lawsuit settlement.

See the articles from the Honolulu Advertiser and Honolulu Star Bulletin links for more information.
Posted by hal763 at 22:10 2 comments: 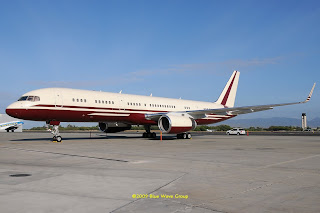 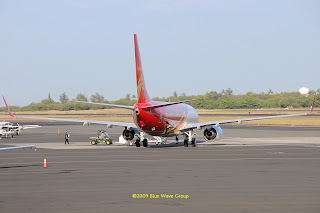 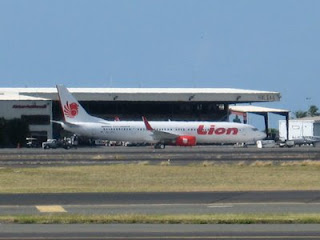 Lion Air International is taking delivery of their newest 737-9GER(W), PK-LFY (c/n 35725), and is routed as LNI1. It's parked on the AirService Hawaii ramp, and scheduled to leave later this evening.

Sorry for the poor quality, as the picture was taken from the North Ramp using the full digital zoom.
Posted by Blue Wave 707 at 16:47 2 comments: 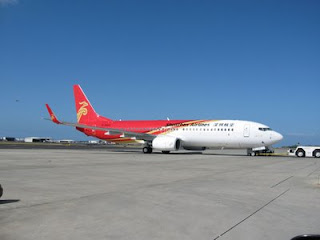 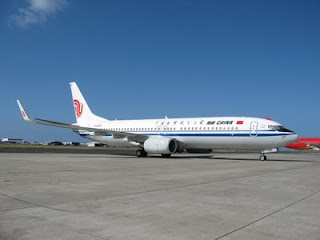 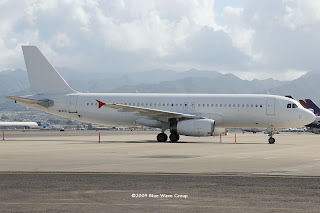 N164CG, an ex-SriLankan A320-231, transited through HNL today. While with SriLankan, it was registered as 4R-ABF (msn 164), is returning to its lessor Wells Fargo. It's routing, tracked on flightaware.com, is MNL-GUM-MAJ-HNL-VCV.

This A320 has also flown with Airtours International as G-DJAR, and was originally delivered to Saarland OY-CNE.
Posted by Blue Wave 707 at 16:36 No comments: 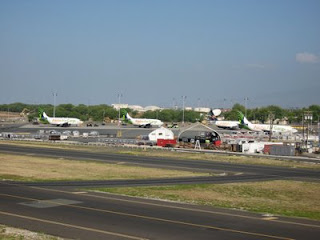 Aloha Air Cargo now has three of their aircraft in the new livery. The latest to get the new livery is N826AL. From left to right is N826AL, N840AL, and N841AL.