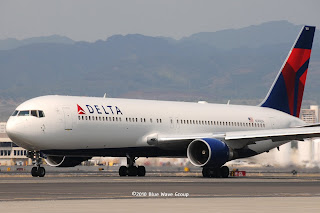 On December 22nd, Delta Air Lines will add service between NGO and HNL using their 767-300ERs.

Delta has this information on their website on a downloadable schedule.
Posted by Blue Wave 707 at 20:41 No comments: 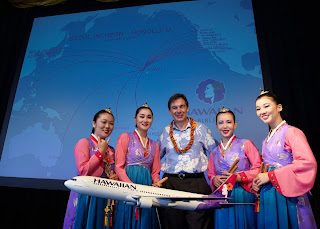 Beginning January 2011, Hawaiian Air will launch service to ICN (Incheon, Seoul, South Korea), pending approval by the South Korean Transport Ministry. HAL459/460 will operate four days a week with their 767-300ERs, and also code-share with Korean Air (which already has two flights between HNL and ICN).

The above photo, courtesy of Hawaiian Air, shows HA CEO Mark Dunkerley with dancers from the Chum Sa Rang the Traditional Korean Dance Institute at this morning's announcement.

This will be Hawaiian Air's third flight to Asia, after their service to HND, which will launch later this year, and their current service to MNL. It is also their sixth international destination.

These are the US registrations for the nine China Eastern MD-90-30s being acquired by Delta Air Lines:
(Information from Planespotters.net) 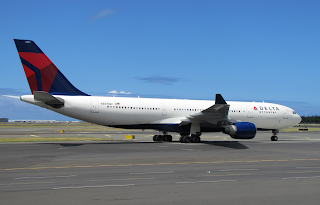 Snapshots a relative of mine took when visiting the islands 37 years ago. 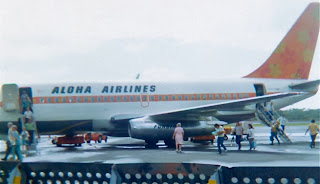 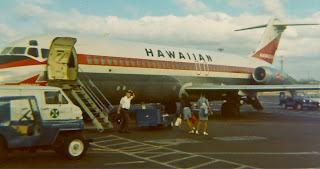 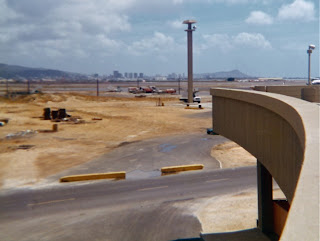 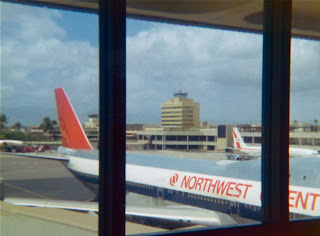 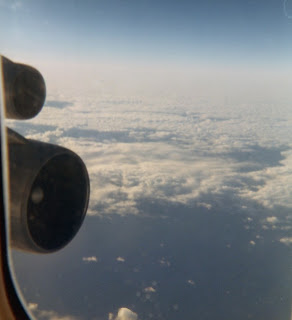 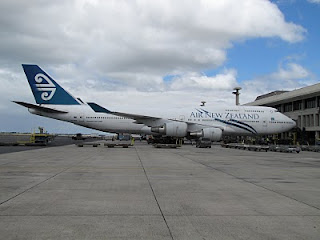 ZK-NBV returned to AKL as ANZ6083 a few hours later.

Mahalo to team member Aeros for the photo!
Posted by Blue Wave 707 at 06:50 No comments: 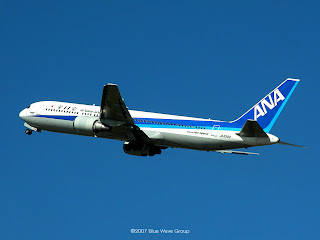 Beginning October 31st, All Nippon Airlines announced that they too will begin service between HND and HNL using a 767-300ER. ANA will compete against Hawaiian Air, Japan Airlines, and China Airlines with this new route, and the opening of the new runway at HND.

Star*Advertiser coverage.
Posted by Blue Wave 707 at 21:48 No comments: 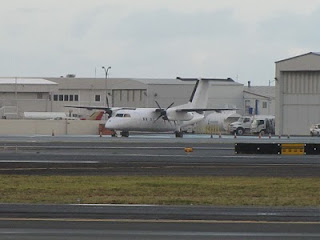 N717AV, a former Henson Airlines (US Airways Express) Dash8-102 is being delivered through HNL today. It was previously registered as N925HA while with Henson. In 2003, it went to Canada to fly for Provincial Airlines / Regional 1 and Canadian North.

There is an all-white 767-300 parked at Hardstand3 on HNL's north ramp today. It's an ex-VARIG 767-341ER, PP-VOI, which was delivered 1989 to VARIG in their original colors. It was also painted in the Star Alliance livery, and the "Compass Rose" livery. PP-VOI was to be acquired by BRA Transportes Aéreos, and re-registered as PR-BRT, but was not taken up. In 2008, Wells Fargo Bank acquired this 763, and was registered as N752SJ (see 1st comment).
Posted by Blue Wave 707 at 14:51 1 comment: 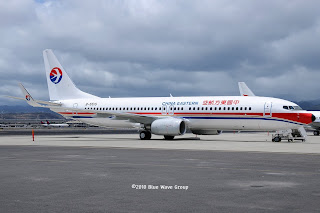 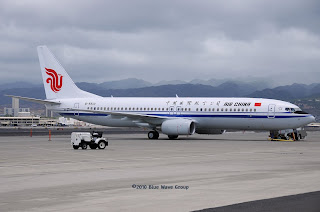 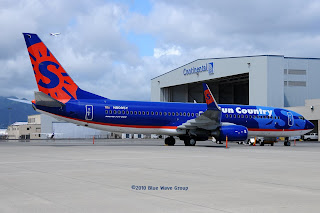 Sun Country Airlines' N809SY (c/n 30683), a 737-8Q8, made an appearance at HNL as SCX8601 from IWA. The flight transferred Hawai‘i Department of Corrections prison inmates housed at Arizona prisons back to prisons here. The return flight took another set of Hawai‘i inmates to a prison in Arizona. 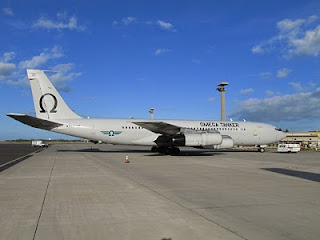 What would be really cool, that HNL replicate the line up at BFI.


N707MQ was delivered to Saudia in 1977 as HZ-ACK. It was then moved to the Saudi Arabian Royal Flight as HZ-HM3. It wore both the original jet fleet livery, and the current Saudi Arabian livery. 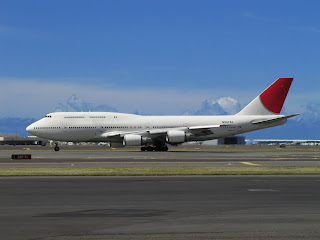 It seems that Cathay Pacific Airlines does training flights in Hawai‘i. FlightAware.com has CPA26 listed from KOA to HNL using a Cessna 182.
Posted by Blue Wave 707 at 06:16 No comments:

Sorry, no HNL photo ... though Rick Schlamp got a photo of PK-GMN during its test phase at BFI.
Posted by Blue Wave 707 at 06:57 No comments: 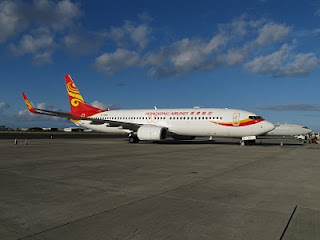 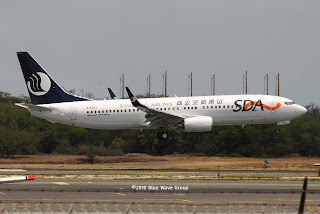 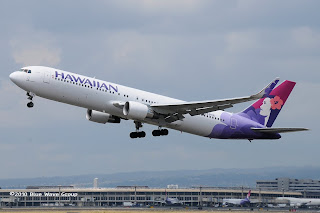 Hawaiian Air is expanding service at OGG by launching service to LAS in October, and will re-launch service to SAN next week. It launched OGG-OAK service last weekend.
Posted by Blue Wave 707 at 14:58 No comments: 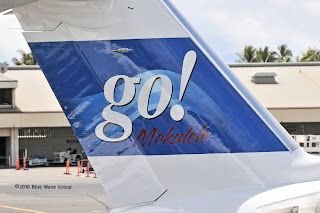 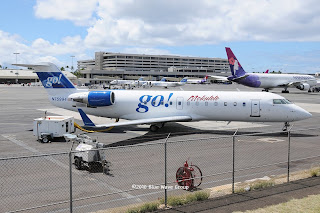 Prior to go!, N75994 served with Mesa Air Group's United Express and US Airways Express. 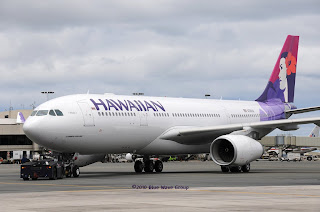 N381HA "Hōkūle‘a", premiered Hawaiian Air's A330 service this afternoon, flying to LAX as HAL2. Parked at Gate 26, 266 passengers were treated to Hawaiian music and hula, as well as receiving a lei before boarding the A330.

Among the 266 passengers aboard HAL2 were Hawaiian musician Cyril Pahinui with his wife, and NFL's Seattle Seahawks Head Coach Pete Carroll.
Posted by Blue Wave 707 at 15:39 4 comments: 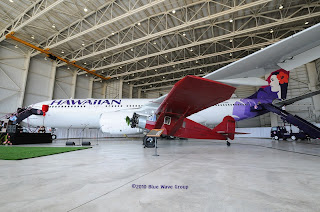 Hawaiian Airlines had their first Airbus A330-243, N380HA "Makali‘i", blessed today in before employees, local dignitaries, and the media.

Hawaiian also brought out their Bellanca CH-300 Pacemaker as well, showing their first aircraft alongside their newest aircraft.
Posted by Blue Wave 707 at 20:10 No comments: