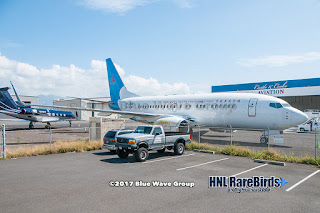 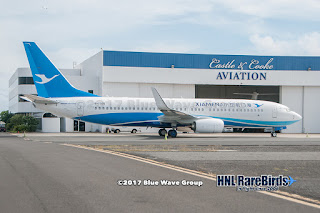 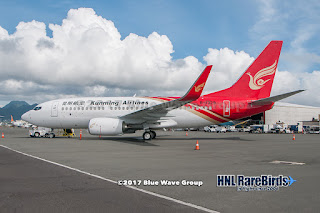 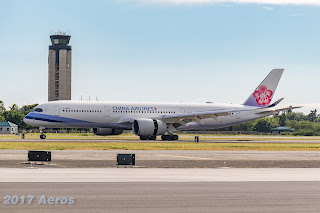 Today marked the first time that a A350-941 operated a revenue flight to Hawaii. Taipei's national carrier China Airlines, will now utilize the newest offering from Airbus on it's TPE-HNL-TPE (CAL1, CAL2) route. 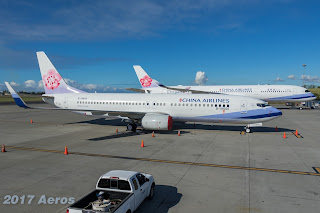 Although the first revenue flight arrived today, it was not the first time that a A350 has visited Hawaii. On Friday evening, China Airlines' B-18901 (msn 049) arrived carrying Taipei's President and the CEO of China Airlines. It will remain in Hawaii while President Tsai Ing-wen is visiting the South Pacific region.

Hawaiian Airlines is taking delivery of their first A321-271N(neo), N202HA (msn 7917), today. It's making its delivery flight from XFW [Hamburg, Germany] to PAE, via JFK. The XFW-JFK leg was flown as HAL9975, and the JFK-PAE leg was flown as HAL9976. At PAE, the A321neo will have some of the in-flight entertainment system installed before coming home to HNL.
Posted by Blue Wave 707 at 10:32 No comments:

The San Diego State University Aztecs football team has chartered Sun Country Airlines for their road game against the University of Hawaii Rainbow Warriors. N821SY (c/n 39952, l/n 5217) is making the trip as SCX8659 from SAN to HNL. The team will return to SAN following Saturday evening's game as SCX8658. 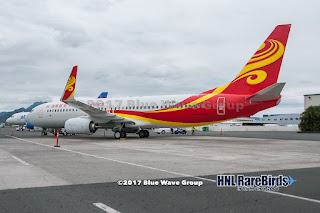 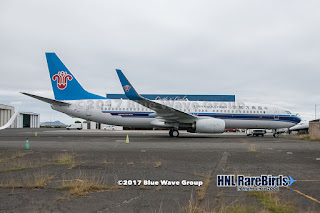 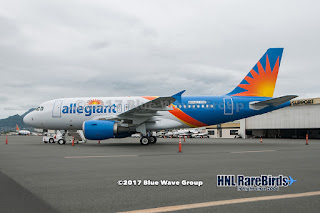 28407 was originally delivered to China Airlines in December 1998 as B-18609. It had Blended Winglets installed in 2007, and was recently withdrawn from service this past May. It was acquired by Contrail Aviation Support earlier this month as registered as N214TE.
Posted by Blue Wave 707 at 23:05 No comments:

Island Air is returning N943WP "Ho‘olauna" (msn 420) to its leasing company this morning. Southern Cross Aviation will ferry it from HNL to CMA as SXA418.
Posted by Blue Wave 707 at 08:20 No comments: 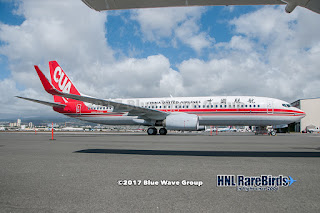 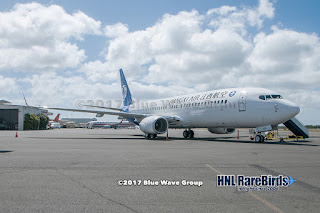 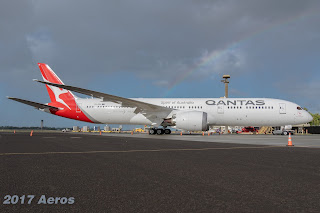 Hawaiian Airlines has begun moving into its new cargo and maintenance facility as the construction has been completed. The twin-buildings, which the airline spent its own money to correct numerous deficiencies by state contractors, will house its cargo operations, maintenance, fleet safety, engineering, and security. The maintenance hangar is large enough to accommodate one A330-243, and two 717-200s.
Posted by Blue Wave 707 at 17:03 No comments: 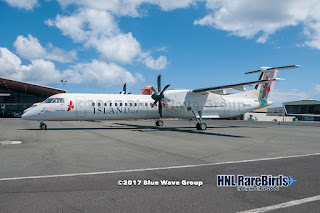 Island Air announced today that they are filing for Chapter 11 Bankruptcy re-organization protection, while they work to resolve issues with their aircraft lessors. With this filing, Island Air will continue to operate as normal, and continue its level of service.

Further details are in this Island Air press release.
Posted by Blue Wave 707 at 16:41 3 comments: 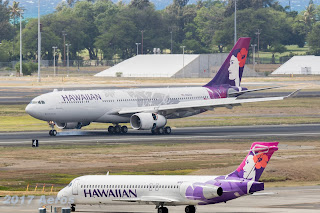 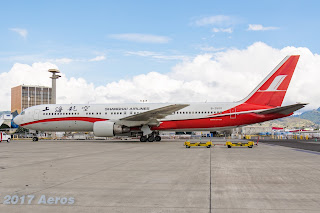 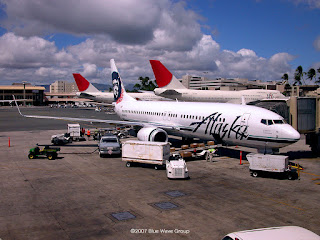 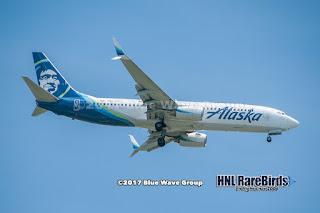 Ten years ago today, Alaska Airlines launched service to Hawai‘i, with a single flight from Seattle.  The airline is celebrating its "Decade of Aloha" with various Hawaii-themed promotions.

The top photo shows N559AS at Gate 23 after it made the inaugural flight from SEA as ASA851. Presently, Alaska Airlines serves the four major Hawaiian airports from eight west coast cities. The above photo shows the airline's current livery.
Posted by Blue Wave 707 at 15:53 No comments: 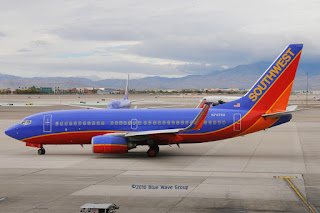 Southwest's Canyon Blue 737s in the Hawaiian Islands? The airline announced today of their intentions to serve Hawai‘i from the west coast. In order to begin service, aircraft from the Southwest fleet will need to be ETOPS 180 certified.  The airline did not state which variant it would launch Hawai‘i service with, either their 737-8H4s or 737 MAX8s. Southwest will release further launch information at a later date.
Posted by Blue Wave 707 at 11:16 No comments:

In an interview with CNN Money, Hawaiian Airlines' CEO Mark Dunkerley, intimated that with the recent changes on their widebody order with Airbus (going from the cancelled A350-800 to the A330-800neo), the airline may turn to Boeing as an option.
Posted by Blue Wave 707 at 17:25 No comments: 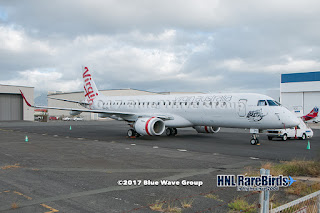 Virgin Australia is ferrying VH-ZPO "Boomerang Beach" (msn 19000321) from BNE to BNA, via APW, HNL, and VNY, as VOZ9901. It arrived this afternoon from APW, and will continue onto VNY tomorrow morning. This ERJ-190AR is being returned to it's lessor, Avolon, who purchased it from Virgin Australia in June 2012, and leased it back. VH-ZPO will be put into storage at BNA.
Posted by Blue Wave 707 at 15:50 No comments: 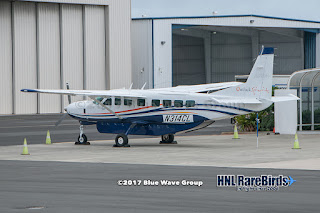 Australian tour provider Outback Spirit Tours is taking delivery of N314CL (msn C208B5355), Cessna C208B Grand Caravan, that is making its way from ICT [Wichita, KS]. Before crossing the Pacific Ocean, it made stops at COS [Colorado Springs, CO], MCE [Merced, CA], and FAT [Fresno, CA]. It will continue onto APW, early tomorrow.  After APW, N314CL's next stops are scheduled to be OOL [Coolangatta] and RCL [Rothwell], before arriving at its new home in Bankstown, New South Wales [BWU]. It will be registered as VH-VCK when arrives at BWU.
Posted by Blue Wave 707 at 10:56 No comments: 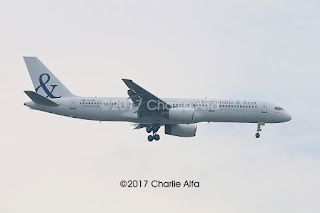 Abercrombie & Kent is a luxury travel company based in Cheltenham, United Kingdom, and the Icelandair 757-27B is outfitted in a VIP cabin layout. 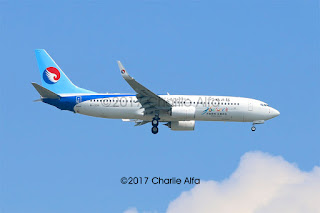 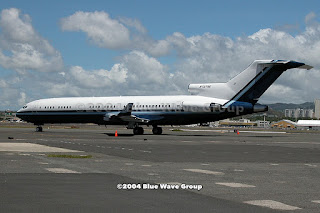 22430 was originally delivered to Transportes Aéreos Portugueses [TP/TAP] (Portugal) in March 1981 as CS-TBY "Amadora". In February 1990, it was sold to Blenheim Aviation, then leased back to TAP. Later that December, it was leased to Somali Airlines [HH/SOM] as 6O-SCG, and subleased to Carnival Airlines [KW/CAA] (USA) in June 1992 with the same registration.  In January 1993, the leased was transferred to Carnival as Somali Airlines shutdown, registered as N6167D, and flew until February 1998. Imperial Palace Air acquired this 727 in May 1998, and re-registered as N727RE in February 1999. The cabin was reconfigured to a VIP layout, winglets were installed, and the JT8D-17 engines were replace with Pratt & Whitney JT8D-217s. It flew with Imperial Palace until April 2005, when it was sold to the government of Burkina Faso (Africa) as XT-BFA. It was withdrawn from service in December 2016, and now sits in storage at QLA [Lasham, UK].
Posted by Blue Wave 707 at 07:27 No comments: