BOE524 from KPAE on 01/25/13, a B747-8 Freighter Experimental on the South Ramp at KOA.  They will be on the ground overnight only on a quick turn test flight.  There's no paint, no frills on this one.  It's all business. 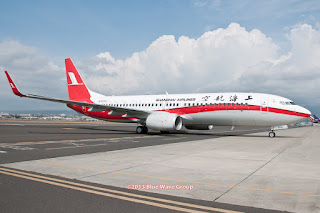 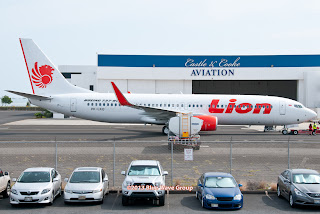 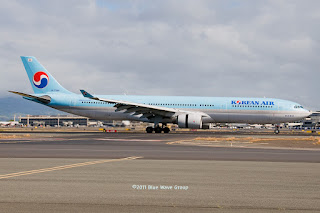 Korean Air is jumping back into the NRT-HNL route beginning March 31, 2013. They will operate this daily service with their A330-300s, KAL001 will originate from ICN, then make a stop at NRT, before arriving at HNL. KAL002 will make the return flights to NRT and ICN.

More information in this KHON article, and this Airline Route article.
Posted by Blue Wave 707 at 21:11 No comments: 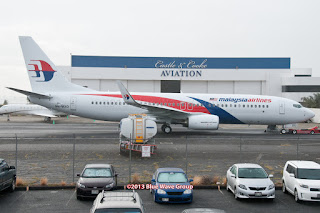 Hawaiian Airlines "Blast From The Past!" 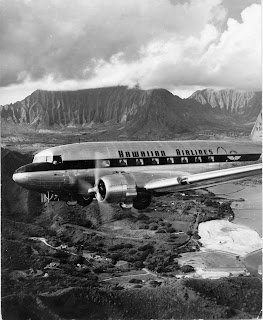 Time for another HNL Rarebirds "Blast from the Past". Above, is a Hawaiian Airlines DC-3 flying over Kāne‘ohe Bay in the late 1940's. The windward side of O‘ahu is as beautiful then, as it is today. And the DC-3 is as beautiful as ever.
Posted by naugusta at 12:14 No comments:

Labels: Blast From The Past, DC-3, Hawaiian Airlines 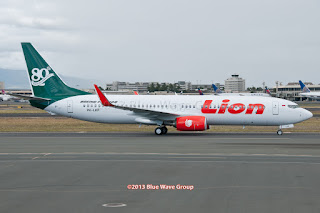 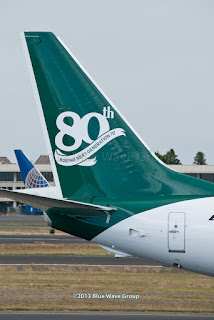 28657 was originally purchased by Boullion AS, and leased to China Xinhua Airlines as B-2982. In mid-2003, it was repainted into the standard Hainan livery, but retained the China Xinhua titles. It never received the 2007 Hainan Group livery.
Posted by Blue Wave 707 at 08:00 No comments: 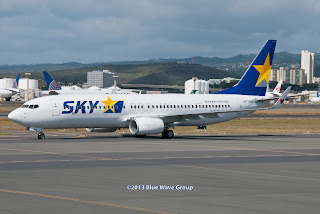 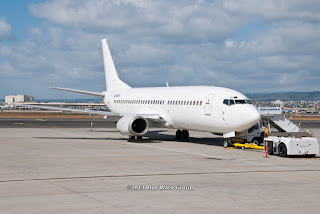 Apparently someone called in a hijack prank the Honolulu FBI Field Office, last night, regarding Alaska Airlines' flight 819, from KOA to SEA. A pair of F-15s were scrambled, and escorted the 737-890 into SEA. The suspected passenger was cleared, but the hunt is on for the caller.

Further information in this KING5 (Seattle) report.
Posted by Blue Wave 707 at 10:39 No comments: 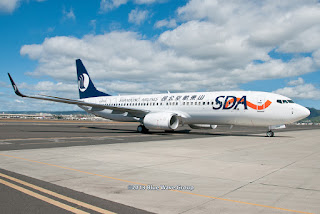 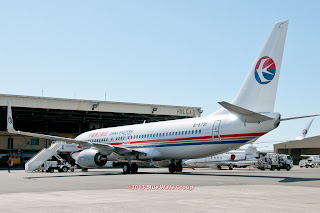 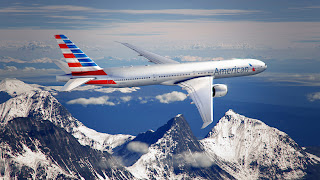 With the arrival of its first few new-build 777-323ERs, American Airlines has unveiled a new logo, livery and branding. Above, is an artist rendition of American's new look. 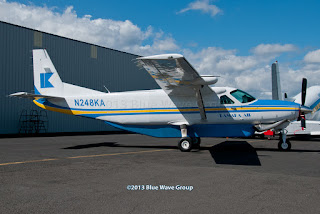 Earlier this week, HNL's newest resident arrived on its delivery flight from SMX. Kamaka Air took delivery of their second Cessna C208BF Grand Cargomaster, N248KA (msn 208B2408). The C208BF was painted into the Kamaka livery at SMX, after flying from the Cessna factory.
Posted by Blue Wave 707 at 19:04 No comments: 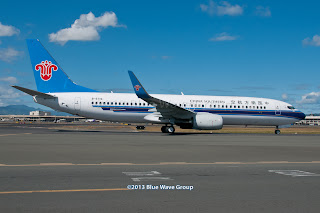 Apparently, there are low fuel supply issues at MAJ, that limits fuel to scheduled service only, hence the second leg going to PNI.
Posted by Blue Wave 707 at 08:04 No comments: 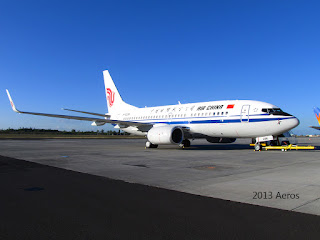 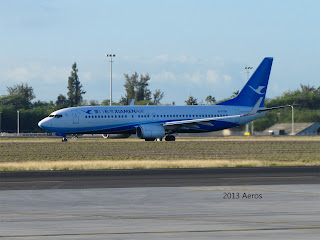 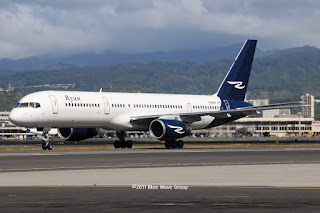 Ryan International Airlines, a frequent visitor to HNL that does college sports charters and state prison inmate transfers, will now undergo liquidation, instead of trying to re-organize. 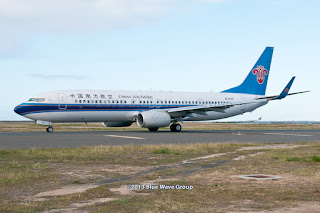 Island Air To Get New Owner

This afternoon, Island Air announced that the company is being sold by Gavarnie Holding LLC to an undisclosed buyer. The agreement to sell the carrier is expected to close in six to eight weeks. There currently is no press release from Island Air, but below are links to the various local news outlets:

Star Advertiser - Island Air to be sold to undisclosed buyer

KHON - Island Air to be sold to undisclosed buyer

Aaron Nee, a 16-year-old Kaiser High School junior, won the Alaska Airlines "Spirit Of The Islands" paint-the-plane contest. The winning design will be applied to one of Alaska's 737-890s.

HNL RareBirds congratulates Aaron Nee for his winning design! We look forward to seeing this 737-890 at HNL.

Hawaiian Airlines announced early this morning, that they have placed an order for 16 Airbus A321NEOs, along with options for nine more. This order, with the first models expected to be delivered in 2017, will give the airline a medium-range single-aisle option for West Coast routes, to compliment their wide-body fleet. The delivery of the first A321NEO will the same year Hawaiian expects to take delivery of their first (of six) A350-800XWB.

The NEO, or New Engine Option version, gives the A321 a range of over 3,600 miles, and Hawaiian the opportunity to explore new routes on the US mainland. When compared to a current A321-200, the range of an A321NEO is 1,000 nautical miles more than the current model; and this is with a similar two-class cabin layout that Hawaiian is opting for. The airline has yet to select which engine, the CFM International Leap-X or the Pratt & Whitney PW1400G/PW1500G, it will go with on their A321NEOs. The NEOs also feature the new "sharklet" blended winglet (as seen above).

Mahalo to Hawaiian Airlines for the artist rendition of what their A321NEO will look like.
Posted by Blue Wave 707 at 07:10 2 comments:

Airliners Photographer of the Day

OK, so we are a little bit proud to be the featured photographer of the day at Airliners . I guess we'll be there (along the left side and half-way down) until this evening. Kinda funny they'd do that, since I haven't posted a picture with them for almost 10 years. All of my pictures on there were taken with film. Here's a link to the pictures of you happen to read this later : OGGTurbojets
Posted by OGGturbojets at 05:45 1 comment:

Here in Hawai‘i, United Airlines, Delta Air Lines, American Airlines, US Airways, and Allegiant Airlines are the main 757 operators. WestJet Airlines has a seasonal wet-lease with Thomas Cook Airlines for its Alberta flights. In the 30 years of service, other airlines such as Canada 3000, Royal Airlines, Northwest Airlines, Omni Air International, Continental Airlines, America West Airlines, ATA Airlines, and Harmony Airways were among the regulars at HNL.

After Eastern's shutdown in January 1991, 22191 was delivered to NASA in December 1994, and served as a test aircraft. In January 2009, it was acquired by Starflite International Corporation, and registered as N144DC.
Posted by Blue Wave 707 at 07:57 No comments: 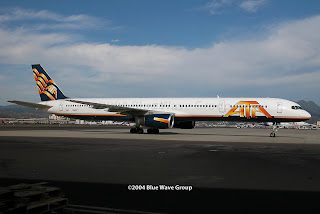 N561TZ was originally delivered to ATA in July 2003, under buy back and lease program with Boeing Capital Corporation (BCC). It flew with ATA, in a one-class Y247 interior seating layout until the the airline's demise in April 2008. Continental Airlines leased this 757 from BCC in December 2009, and registered as N77871 (f/n 871). Later, it had Blended Winglets installed, and the interior re-configured to an F24Y192 layout. N77871 was absorbed into the United Airlines fleet (f/n 0871) when the two carriers merged in 2010. 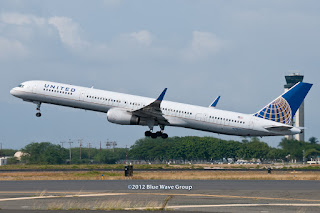 We were fortunate to get a photo of N77871 while here at HNL, this past December 7th, and is seen above departing Runway 22L, destined for LAX as UAL1636, when the "Kona Winds" were blowing. It's one of the few opportunites that we're able to get "then & now" photos of "HNLRareBirds Classic" subjects.
Posted by Blue Wave 707 at 07:53 No comments:

The HNL RareBirds team wishes you all a blessed and prosperous 2013!
Posted by Blue Wave 707 at 00:00 No comments: