Happy New Year!
The HNL RareBirds team wishes you all a blessed and prosperous 2012!
Posted by Blue Wave 707 at 16:11 No comments:

B-2982 was delivered to China Xinhua in March 1997. It was later re-painted to the Hainan Air Group colors.

I didn't expect to hear an ACA flight turning right base on the radio when I was on my way to Costco today. Here is C-GHPE (c/n 33423, l/n 897) arriving from CYYC. Seasonal daily flight. This 767-33AER was previously regestered as Hawaiian Airlines N591HA. That dent on the fuselage just below the leading edge of the right horizontal stabilizer seems like something that should be checked. And the location of the aft bulkhead appears to be visible on the skin.
Posted by OGGturbojets at 16:30 1 comment:

The HNL RareBirds team wishes you all a very Merry Christmas!
Posted by Blue Wave 707 at 17:39 No comments: 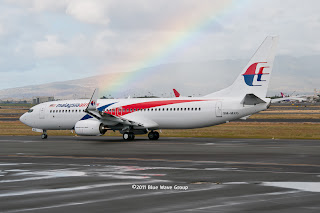 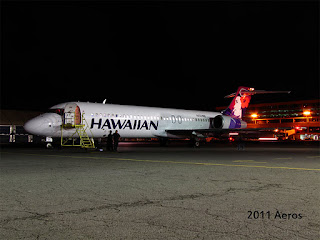 Mahalo to team member MRC Aviation for the heads-up!

Sorry, we were unable to get a photo of N104HK. 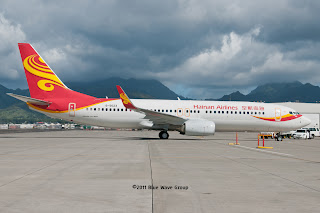 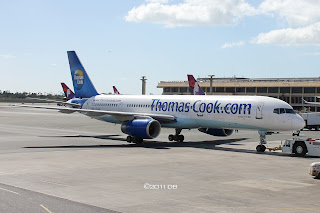 Westjet Airlines [WS/WJA] has leased a 757-200 from Thomas Cook Airlines to provide seasonal service between the Canadian province of Alberta and Hawai‘i. The flights will go between YYC (Calgary) and HNL, YYC and OGG, and YEG (Edmonton) and OGG. These flights will run through April 2012.

Air Australia inaugurates service between MEL and HNL this morning with the arrival of AGC11. Their A330 is scheduled to arrive around 0945HST.

Aviation writer Will Horton tweeted that he is on this flight.
Posted by Blue Wave 707 at 06:13 No comments:

The Greater Rockford Airport Authority [RFD/KRFD] has offered Mokulele Flight Service (dba Mokulele Airlines) an opportunity to expand their service to the northern Illinois city airport from HNL beginning in March 2012. The offer also proposes Mokulele to continue onto Stansted, London, UK [STN/EGSS] in May 2012.
Mokulele has yet to release a statement to confirm these reports. The current Mokulele fleet consists of four Cessna C208B Caravans. This would mean acquiring ETOPS-certified aircraft to fly those flights.
It has been reported locally that Mesa Airlines, parent company of go!, has a stake in this offer. But Mesa sold off its share in Mokulele, and only remains as a code-share partner in the go!Mokulele operation.
Article links from Rockford, IL: WREX, eRockford blog (Rockford Register Star), and WIFR. From Honolulu: Hawai‘i News Now.
Posted by Blue Wave 707 at 05:09 2 comments: 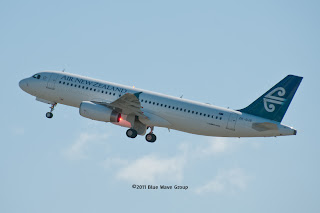 Air New Zealand is taking delivery of ZK-OJS (msn 4926), an A320-232, that is flying as ANZ6395. It's currently at DEN, waiting to fly here via LAX. ZK-OJS left TLS yesterday for DEN with a stop at YQX. It's seen above departing Runway 8R for APW.
It's probably the only new build A320 series that does a west-bound delivery flight to the Pacific. All others leave TLS, and travel eastbound across the Middle East and southern Asia,
On a related note, we missed the delivery of ANZ's ZK-OJR (msn 4884) that stopped though HNL on 11-12 November.
Posted by Blue Wave 707 at 06:07 No comments: 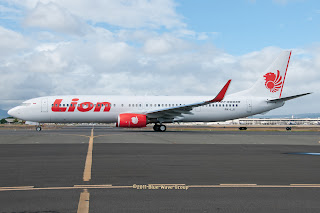 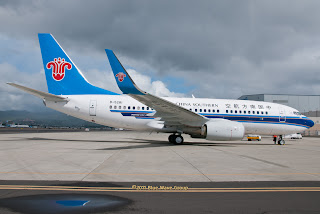 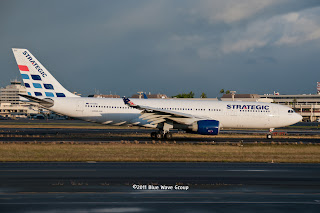 Air Australia [VC/AGC] began service today between BNE (Brisbane, Australia) and HNL. The first flight landed (above) on Runway 4R just before 0730 as "Strategic1". Their A330-223, VH-SSA "Outback" (msn 324), still wears the original Strategic livery and branding, as it is their lone A330. Only their one of their three A320-212s have received the Air Australia livery.
Service between MEL and HNL will launch on Friday.
Posted by Blue Wave 707 at 17:06 3 comments: 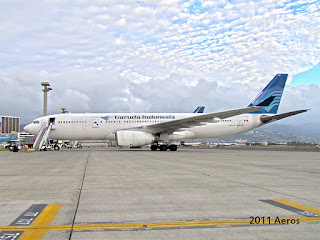 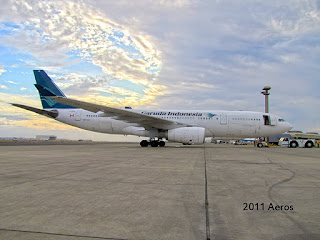 The second and third of four Air Transat A330-243s sub-leased by Garuda Indonesia are on their way back to Canada. TSC60 is flying from WARQ / SOC (Adisumarmo Int'l [Adi Sumarmo Wiryokusumo]), and TSC80 is flying from WIDD / BTH (Hang Nadim). Both flights will stop at HNL for fuel later this afternoon.

TSC60 continued onto YUL after a brief fuel stop..

One of four A330-243s sub-leased to Garuda Indonesia for Hajj flights, stopped over for fuel at HNL this morning. Flying as TSC70, the flight originated from Adisumarmo Int'l (Adi Sumarmo Wiryokusumo) [WARQ / SOC], and continued onto YYZ.
Posted by Blue Wave 707 at 18:33 1 comment:

go!Mokulele grounded their Cessna Caravan fleet due to a issue with the flaps systems, that resulted in the cancellation of service since Friday.
KHON news coverage.
Posted by Blue Wave 707 at 17:16 No comments: 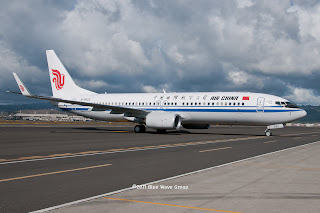 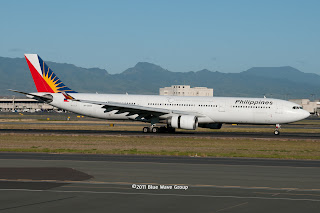 Philippine Airlines celebrated their 70th anniversary this past March, and is listed milestones on their website.
Posted by Blue Wave 707 at 07:33 No comments: 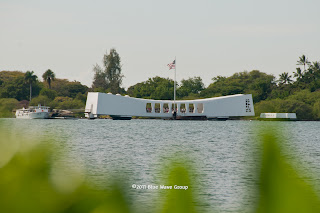 The HNL RareBirds team honors those who lost their lives in the attack on the Pearl Harbor Naval Base, 70 years ago today. Along with the naval base, ‘Ewa Marine Corps Air Field, Kāne‘ohe Marine Corps Air Field, Hickam Army Air Field, Bellows Army Air Field, and Wheeler Army Air Field, all came under attack by carrier-based fighter-bombers of the Imperial Japanese Navy.
The USS Arizona Memorial sits above the sunken hull of the battleship, BB-39. Within the sunken hulls off of Ford Island, are hundreds of sailors and marines entombed, and the area considered sacred ground and a National Cemetery.
Posted by Blue Wave 707 at 07:54 No comments: 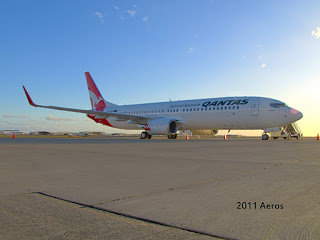 Mahalo to team member Aeros for the above photo of VH-VZV, sitting at one of the North Ramp Hardstands, in the late afternoon sunlight.
Posted by Blue Wave 707 at 07:38 No comments: 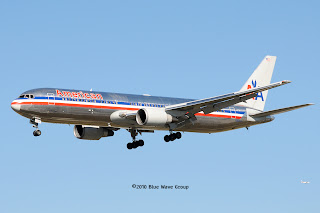 American Airlines was announced as co-sponsor of the Honolulu Marathon. It will join OneWorld® partner Japan Airlines as principle sponsors of the December race. 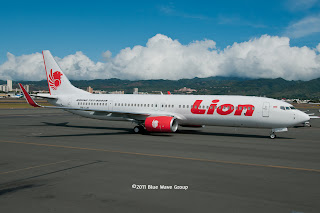 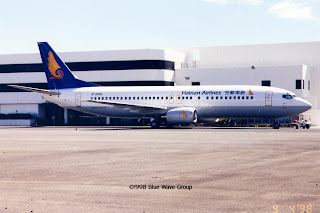 The December edition of "HNL RareBirds Classic" goes back to 1998 with Hainan Airlinesʻ B-2501 (c/n 29914, l/n 3067). This 737-44P was photographed on September 4, 1998 as it sat alongside the Circle Rainbow Air complex, while it was making its delivery flight from BFI to HAK. Itʻs also seen in their original livery. This 13-year-old "Baby Boeing"  continues to fly with Hainan, and has since been re-painted in their current livery. The area where I took this photo is where the Sky River Consulting hangar now stands.
Posted by Blue Wave 707 at 10:59 No comments: 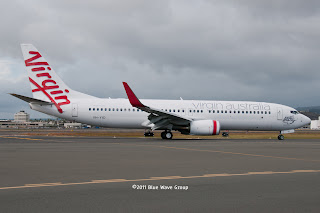