The Hawai‘i Department of Transportation Airports Division has designated the parking spots south of the AirService Hawaii Makai Hangar as Spots 188A and 188B. FBOs have been using the two stands for delivery and ferry flights.

Asia Pacific Airlines used the parking spot closest to the hangar for their 727-200F operations, but with the 757-200s, they moved to Hardstands I and J; though some of their ground equipment remains next to the AirService hangar.
Posted by Blue Wave 707 at 13:20 No comments: 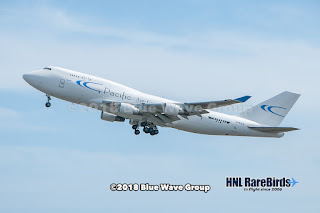 24226 was originally delivered to Singapore Airlines in September 1990 as 9V-SMG. In July 2004, it was purchased by Air India as VT-AIE "Mamallpuram". In May 2007, Boeing Aircraft Holdings acquired 24226, and converted to a freighter, and six months later, sold to Aircastle, who leased it to Martinair Holland as PH-MPR. In November 2012, Aircastle leased this 747-412F to Air Atlanta Icelandic as TF-AMF. From January 2013 to October 2015, it was subleased to Saudi Arabian Airlines; and from October 2015 to November 2016, subleased to Air Bridge Cargo. It was returned to Aircastle, and stored at MCI. Jet Midwest purchased this airliner in February 2017 as N262JM, and sold it nine months later to Kalitta Air. It was re-registered as N703CK in February 2018.
Posted by Blue Wave 707 at 11:01 No comments: 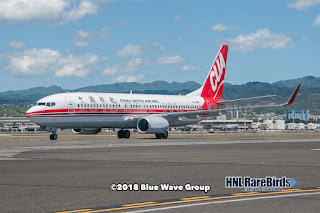 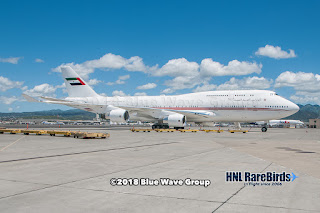 26903 was originally delivered to United Airlines in August 1998 as N108UA, and flew with United until January 2003. Eight months later, it was delivered to the Dubai Air Wing [DUB] (United Arab Emirates) as A6-HRM, with a new VIP-configured cabin.
Posted by Blue Wave 707 at 15:50 No comments: 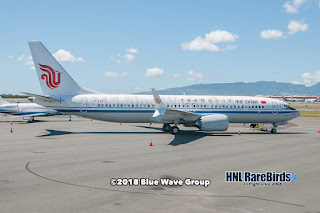 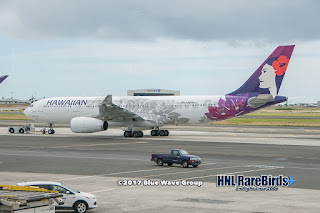 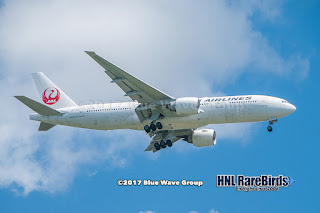 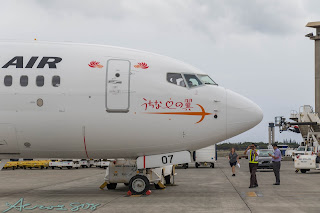 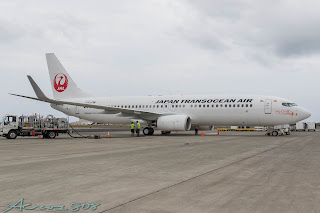 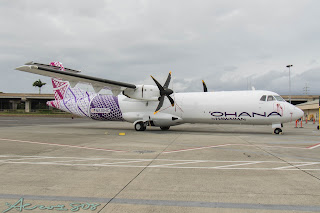 N810HC (msn 423) was delivered to Avianova, under leased from BBAM in February 1995 as EI-CLB "Lago di Bracciano". In December 2005, it was acquired by Alitalia Express as I-ATRO. It went to Magellan Aircraft Services in November 2010, and four months later it was sold to First Air as C-GLHR. In April 2012, it was converted to a freighter. In August 2015, it was acquired by ‘Ohana.
Posted by Blue Wave 707 at 15:29 No comments: 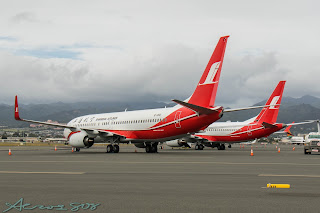 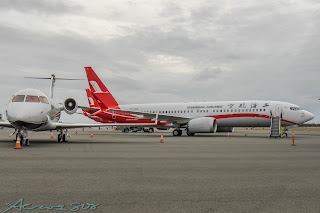 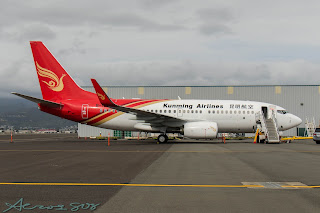 Southwest Airlines was granted approval from both the State of Hawai‘i Department of Transportation (HDOT) and the Department of Land and Natural Resources (DLNR) to start service between the west coast and Hawai‘i. The airline still needs FAA approval and certification to perform ETOPS flights.

Further information in this KHON2 article. 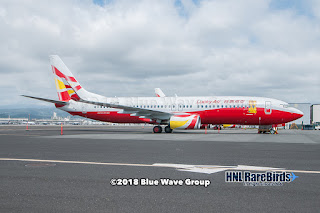 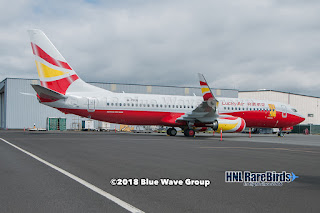 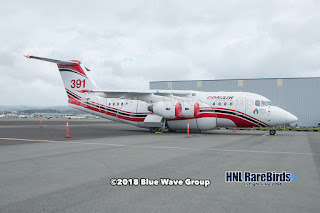 ConAir's RJ85 firebomber, C-GVFK (msn E2268), has made a stop at HNL this evening, as it returns to Abbotsford, British Columbia, Canada from it summer firefighting assignment in Australia.
Posted by Blue Wave 707 at 20:58 No comments: 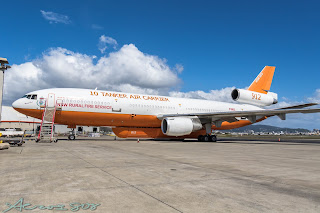 Air Canada announced today that they be launching 737 MAX8 service between Western Canada and Hawai‘i later this year. The airline announced that it will also launch thrice-weekly service between Vancouver, British Columbia [YVR] and Līhu‘e, Kaua‘i [LIH] beginning on December 15, 2018 to April 27, 2019. Other 737 MAX8 flights include YVR-HNL and YVR-OGG, that will go twice daily in winter months; and YVR-KOA (seasonal). Air Canada will also launch four-times weekly service between Calgary, Alberta [YYR] and Kahului, Maui [OGG].

Further information in this Air Canada press release.
Posted by Blue Wave 707 at 16:11 No comments: 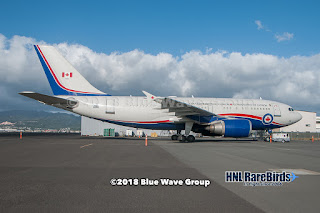 The Royal Canadian Air Force's CC-150 Polaris 15001(msn 446, f/n 01) has made a stop at HNL. This is the only Polaris in the RCAF fleet that has a VIP interior, and is usually the transport for their prime minister.

446 was originally delivered to Wardair Canada [WD/WDA] in February 1988 as C-GBWD "C.C. 'Carl' Agar" (f/n 806). In January 1990, it was transferred to the Canadian International Airlines fleet, when they acquired Wardair. In 1993, this A310 was purchased by the Royal Canadian Air Force, registered as 15001, and had the cabin configured for a VIP transport. In 2013, 15001 was painted in the present livery, and part of "O Canada" ('True North strong and free') is below the cockpit windows English and French.
Posted by Blue Wave 707 at 12:00 No comments: 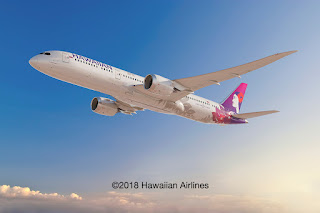 Boeing and Hawaiian Airlines announced this morning that the Honolulu-based carrier has signed a Letter of Intent to order ten 787-9 Dreamliners, with an option for an additional ten aircraft. Delivery of the first Dreamliner is expected to be in the first quarter of 2021.

Further information in this Hawaiian Airlines press release, and this Boeing Media Room press release.
Posted by Blue Wave 707 at 10:17 No comments: 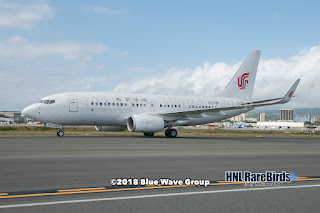 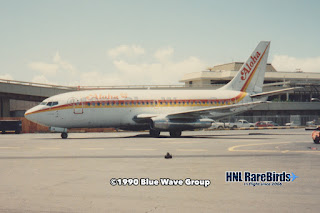 Sadly, Aloha Airlines was shutdown on 31 March 2008, as it was unable to secure further financing to keep operating, after 61 years of service.

21720 was originally delivered to Air Florida, under lease from the ITEL Corporation, in January 1979 as N37AF, and flew with the airline until September 1984. During its time with Air Florida, N37AF was subleased to Transavia for two five-months stints (May-October 1981 and May-October 1982). In September 1984, it was sold to POLA, and leased to AirCal as N458AC. When American Airlines acquired AirCal, the latter's fleet was transferred over, and wore hybrid liveries. N458AC was also subleased to the second incarnation of Braniff Airways in February 1988. In May 1990, 21720 was sub-subleased to Aloha Airlines as N809AL. In May 1997, it was acquired by ACG, and the lease continued with Aloha Airlines. It was also painted in the airline's final livery, and flew with the airline until March 2003, where it was placed into storage at GYR. In June 2005, this 737-2Q9/Adv was scrapped.
Posted by Blue Wave 707 at 07:32 1 comment: