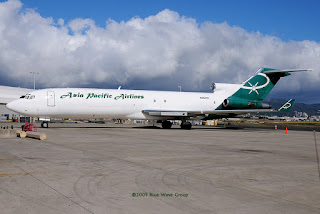 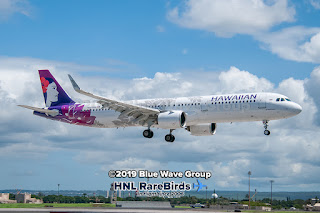 Hawaiian Airlines announced today that they will begin weekly A321-271N service to RAR [Rarotonga, Cook Islands] on 20 May 2023. The Cook Islands are looking to expand tourism from the US, as it is a quite popular tourist destination among New Zealanders and Australians.
This will be the second time Hawaiian has served the Cook Islands. They prior DC-8 service from 1987 to 1993.
Further details in this Hawaiian Airlines press release.
Posted by Blue Wave 707 at 09:38 No comments: 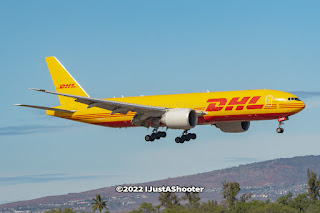 Kalitta Air is flying their DHL-liveried 777Fs from CVG to SYD, with a fuel stop at HNL. This service operates several times per week with different flight numbers
Posted by Blue Wave 707 at 20:08 No comments: 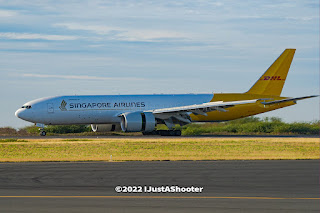 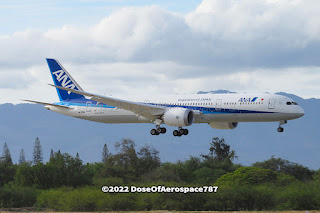 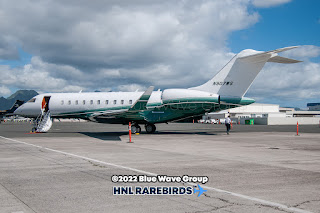 HNL's resident Global Express, N907WS (msn 9176), owned by N907WS Aviation LLC, made a cameo appearance in tonight's episode of NCIS Hawai‘i, "Curtain Call". The scene was filmed at JRF, which was supposed to be somewhere in México.
Posted by Blue Wave 707 at 23:29 No comments: 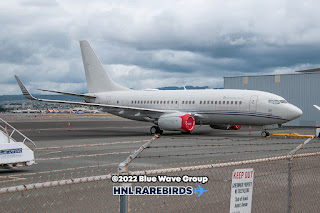 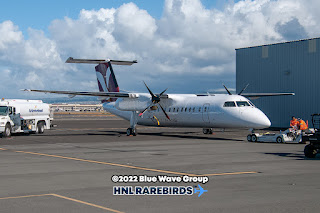 Skytrans [QN/SKP](Australia) is taking delivery of C-FNCU (msn 517). This Dash8-311Q, flown by Southern Cross International, is making its delivery flight from YYB to CNS as SXA719, with stops in  CIU, MMV, OAK, HNL, and MAJ.
517's History:
Jan 1999: Delivered to Brymon Airways as G-NVSB, operating for British Airways.
Mar 2002: Re-branded as British Airways CitiExpress.
Feb 2007: Withdrawn from service.
May 2007: Acquired by Voyageur Airways as C-FNCU, operating for the United Nations.
May 2022: Withdrawn from service.
Nov 2022: Acquired by Skytrans Airlines.
Posted by Blue Wave 707 at 20:32 No comments: 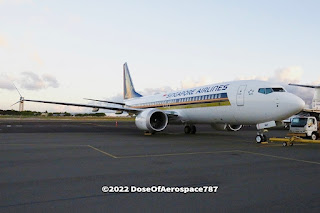 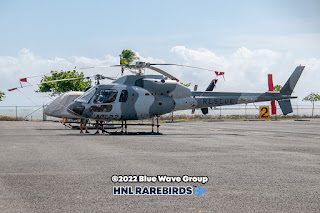 There is an addition to the Magnum Helicopters fleet with N52ZX (msn 5515). This Eurocopter AS355F2 is being leased from AS355 LLC [Camden, DE], and is painted in a multi-grey camouflage livery. It arrived earlier this week via shipping container, and re-assembled at the Magnum Helicopters hangar.
Posted by Blue Wave 707 at 23:43 No comments: 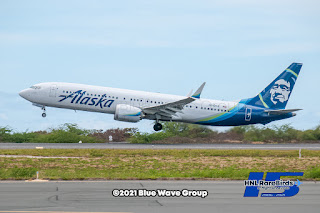 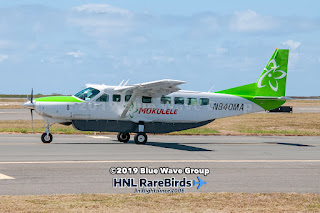 Beginning in 2023, Mokulele Airlines joins the Alaska Airlines Mileage Plan, which will allow passengers on both airlines access each others' route network.
Further information in this Alaska Airlines press release.
Posted by Blue Wave 707 at 11:57 No comments:

05-5151 (c/n P-151) of the 204th Airlift Squadron performed a flyover prior to the University of Hawai’i Rainbow Warriors game against the Utah State Aggies to honor veterans on this Veteran’s Day weekend. The flight was crewed by both Hawai’i Air National Guard (154th Wing) and US Air Force (535th Airlift Squadron / 15th Wing) personnel. One of the pilots was Major Britton Komine, who also played wide receiver for the Rainbow Warriors (2001-04).
A video clip from the Hawai‘i Air National Guard's Instagram page.
Posted by Blue Wave 707 at 18:32 No comments:

Alliance Airlines is taking delivery of their next QantasLink-liveried ERJ-190AR, N948UW (msn 19000081), today. It's flying from SJO to BNE, via SDM, HNL, and MAJ, as UTY9813. It will overnight at HNL tonight. This E190 is due to be registered as VH-XVX.
19000081's History:
Jun 2007: Delivered to US Airways.
Dec 2013: Integrated into the American Airlines fleet following the merger with US Airways.
Mar 2020: Withdrawn from service, and stored at PIT, and ferried to ROW a month later.
Mar 2021: Sold to Jetran, and remained in storage.
Oct 2021: Acquired by TVPX Trust Services for preparation to sell to Alliance Airlines.
Jun 2022: Ferried to SJO for repaint and configuration for Alliance Airlines.
Posted by Blue Wave 707 at 17:23 No comments: 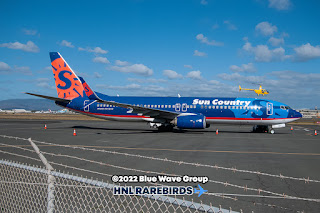