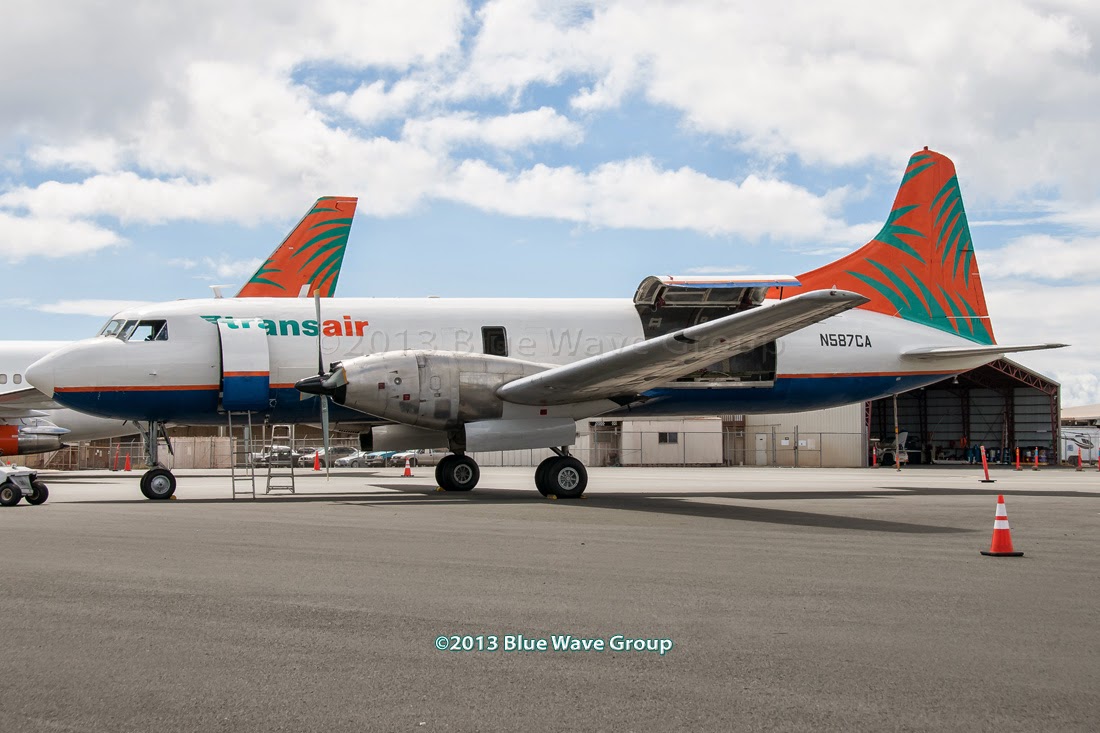 
04.01.15 Update
Skyliner-Aviation.de reports that N587CA is bound for Aeronaves TSM [VTM] (México), it's Mexican registry is pending. It has not been stated whether this is a lease, or sale to Aeronaves TSM.
Posted by Blue Wave 707 at 16:28 No comments: 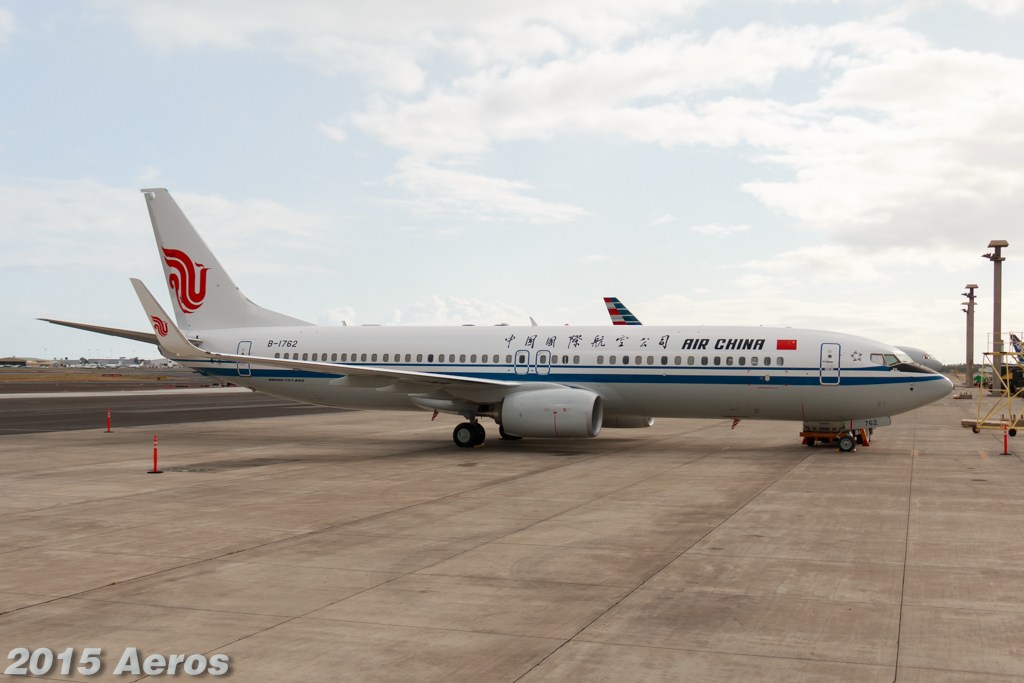 HNL's Taxiway Z will be undergoing resurfacing over the next five weeks. As a result, portions will be closed where the work is being done.

Further information in this Hawai‘i Department of Transportation press release.
Posted by Blue Wave 707 at 15:11 No comments:

The HNL RareBirds team expresses our condolences, thoughts and prayers to the families of the 150 passenger and crew that were aboard Germanwings [4U/GWI] flight 9525. Their A320-211, D-AIPX (msn 147) went down in the French Alps today.

Further details in coverage by the Aviation Herald.
Posted by Blue Wave 707 at 06:31 No comments:

CH-Aviation reports that Jin Air [LJ/JNA] (Korea), the low-cost carrier subsidiary of Korean Air, will begin international service in December, and one of the flights will be ICN-HNL. Jin Air is leasing a 777-200ER from Korean Air. It's not known the frequency of the service, but this will add about 300 passengers per flight to the growing Korean tourist market in Hawai‘i.

GainJet Aviation's [GNJ] (Greece) 757-23N, SX-RFA (c/n 30232, l/n 888) is making a stop at KOA from LAX as GNJ47. The flight originated somewhere in Europe, then made a stop at YQX prior to LAX. GainJet Aviation S.A. is a Greek private charter company. It was substituted for the TAG Aviation / Four Seasons Resorts 757-200 that was supposed to have flown the Four Seasons Resorts "Private Jet Experience".

30232 was originally ordered by Wells Fargo Bank Northwest, and leased to American Trans Air in September 1999 as N523AT. It was returned to WFBN in April 2005, then sold to Fastway Leasing Ltd, in December as EI-LTO. In April 2006, it was leased VIM Airlines [NN/MOV] (Russia) as EI-LTO, then subleased to Air Bashkortostan [ZU/BBT] (Russia) for two years. In April 2009, Castaway Leasing sold the 757-23N to GainJet Aviation as SX-RFA, complete with Blended Winglets and a 62-seat VIP layout.
Posted by Blue Wave 707 at 13:18 No comments: 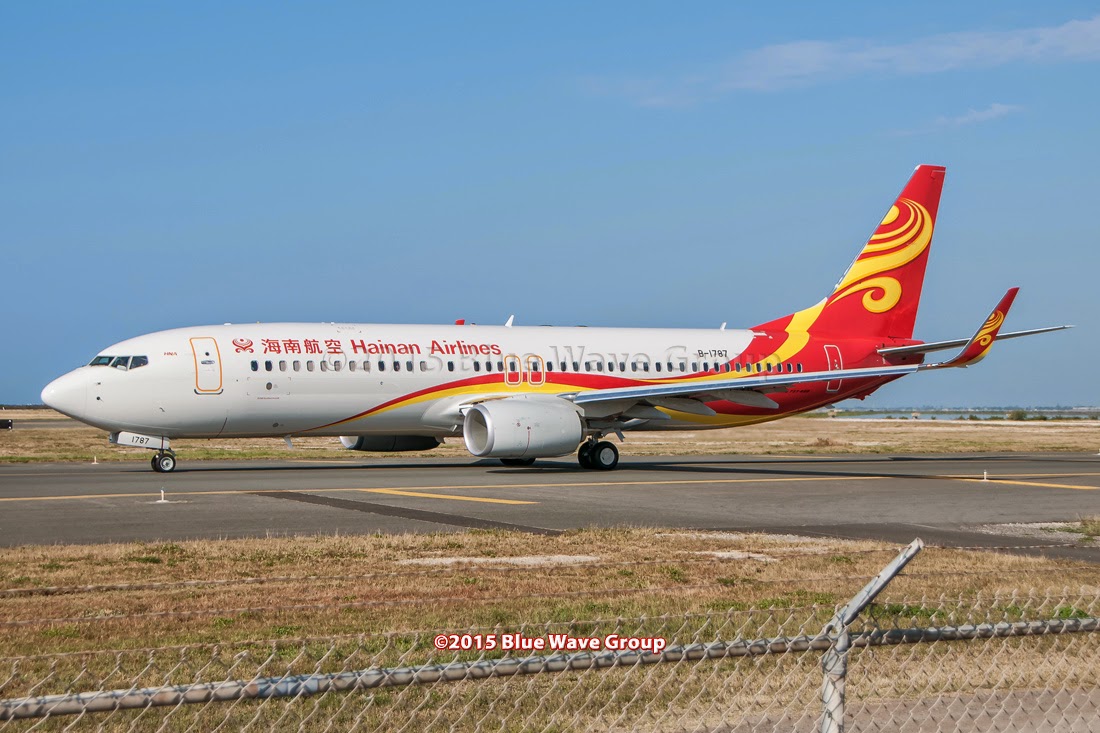 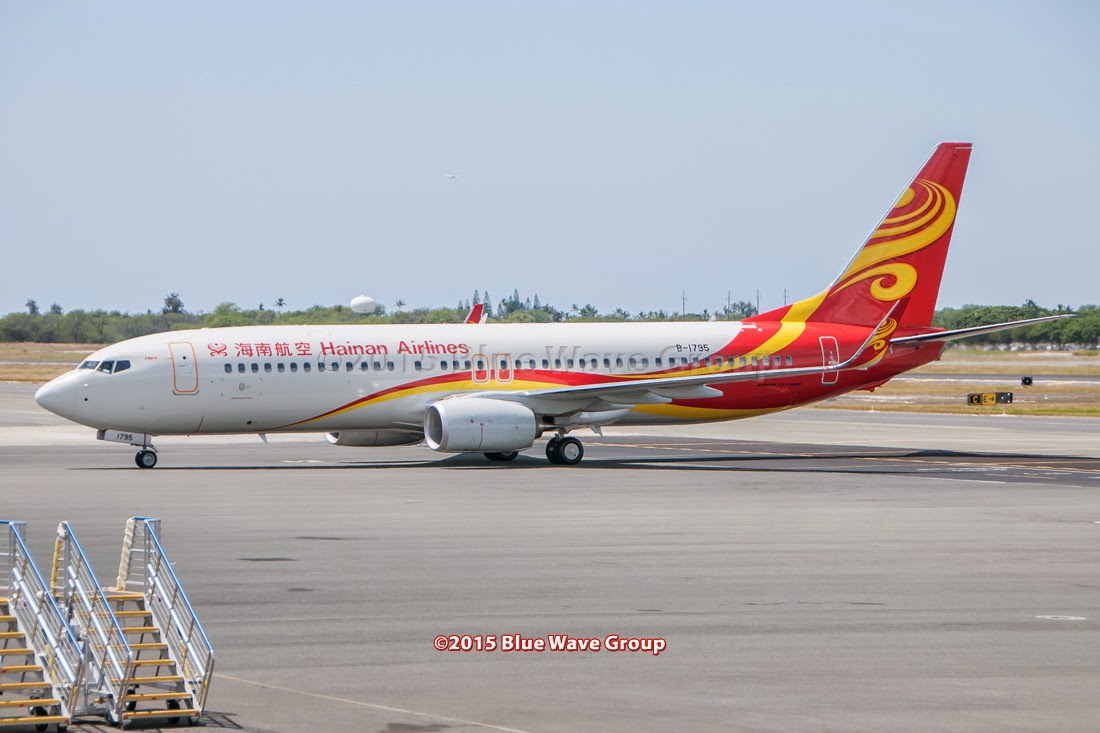 Conner's firefighting RJ85, N355AC (msn E2293), is returning to CYXX [Abbotsford, British Columbia, Canada] after its stint in Australia. It stopped through HNL in December 2014 on its way Down Under. 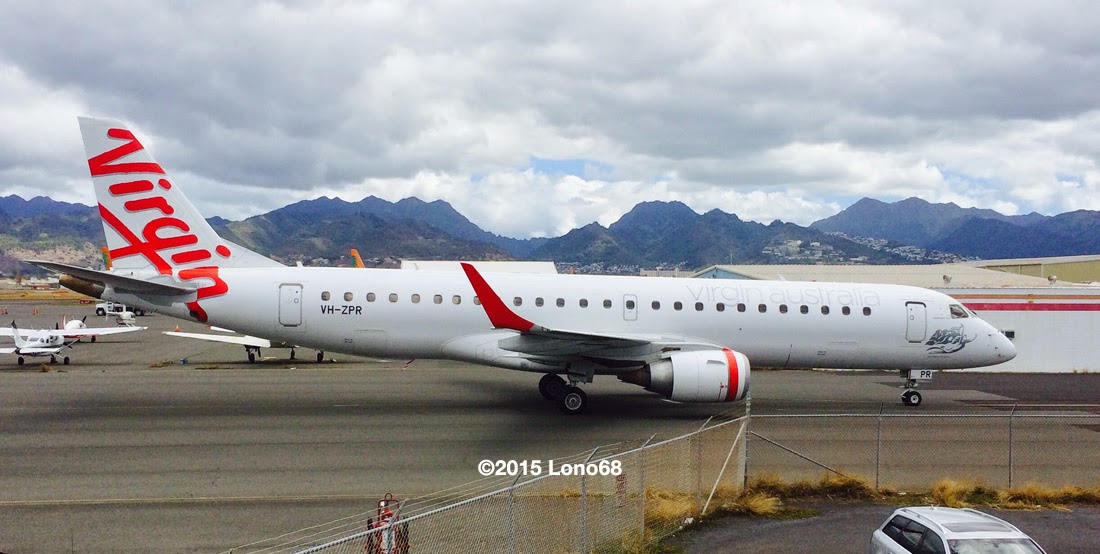 Virgin Australia's E-190 VH-ZPR "Dundee Beach" (msn 190000424) is returning to Australia, after its maintenance check at BNA. It's stopping off at HNL from VNY, and will continue onto APW tomorrow. VH-ZPR stopped at HNL on 11 February, on its way to BNA. 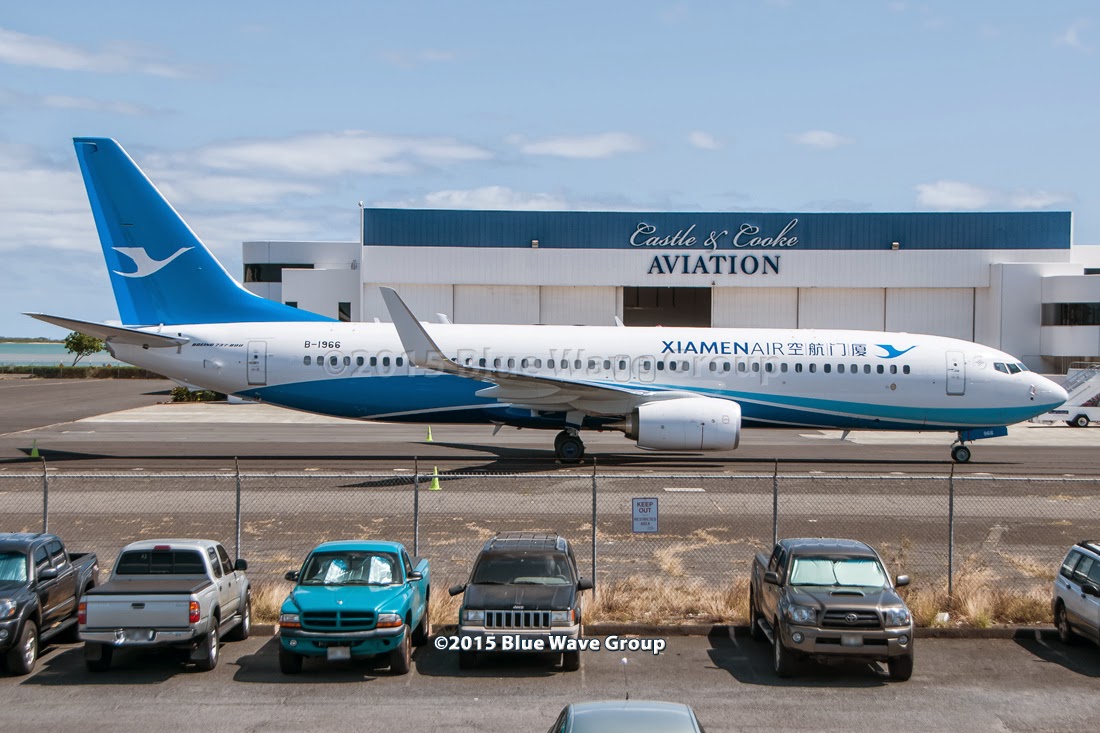 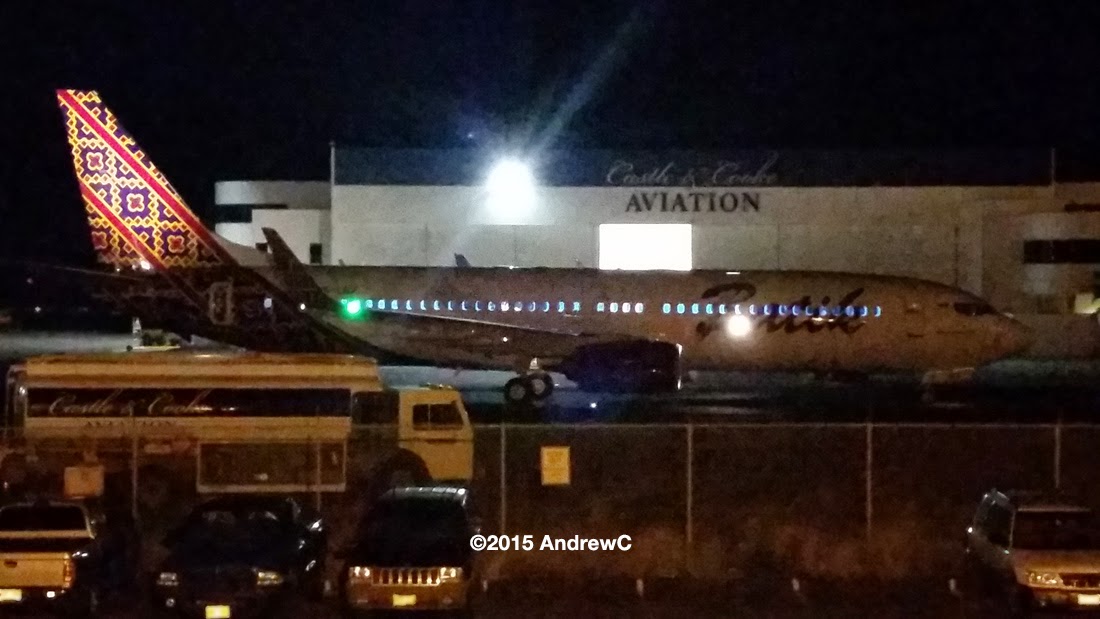 Mahalo to team member AndrewC for the photo.
Posted by Blue Wave 707 at 08:09 No comments: 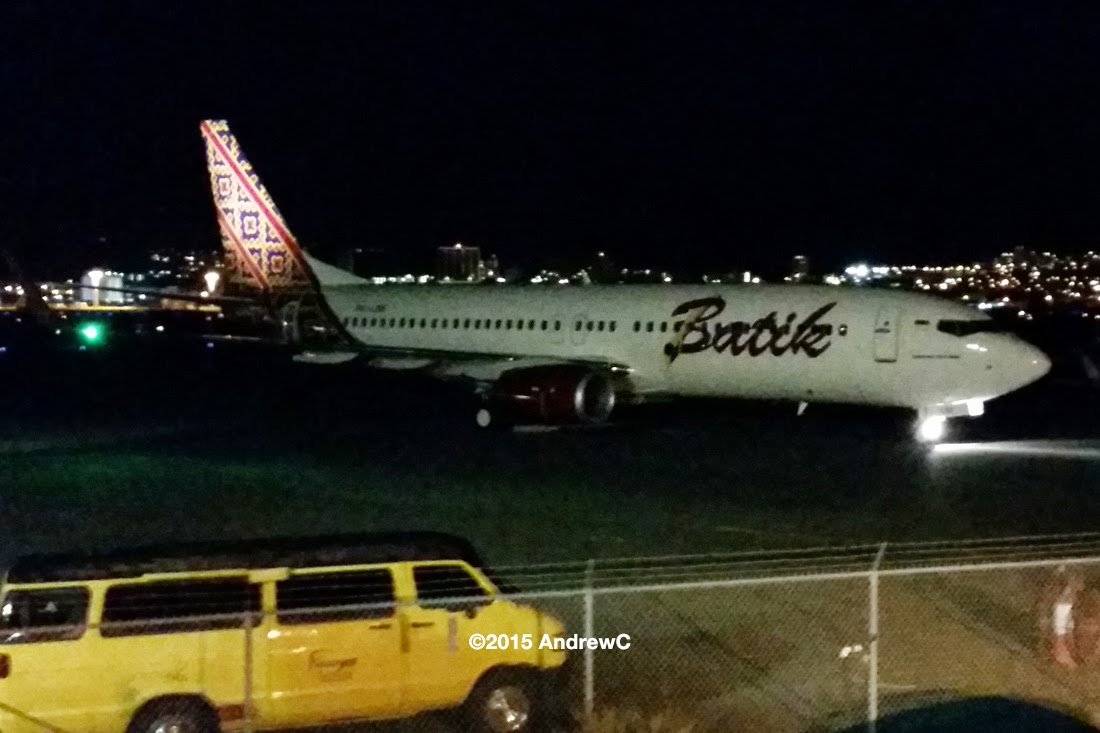 Mahalo to team member AndrewC for the photo.
Posted by Blue Wave 707 at 08:06 No comments: 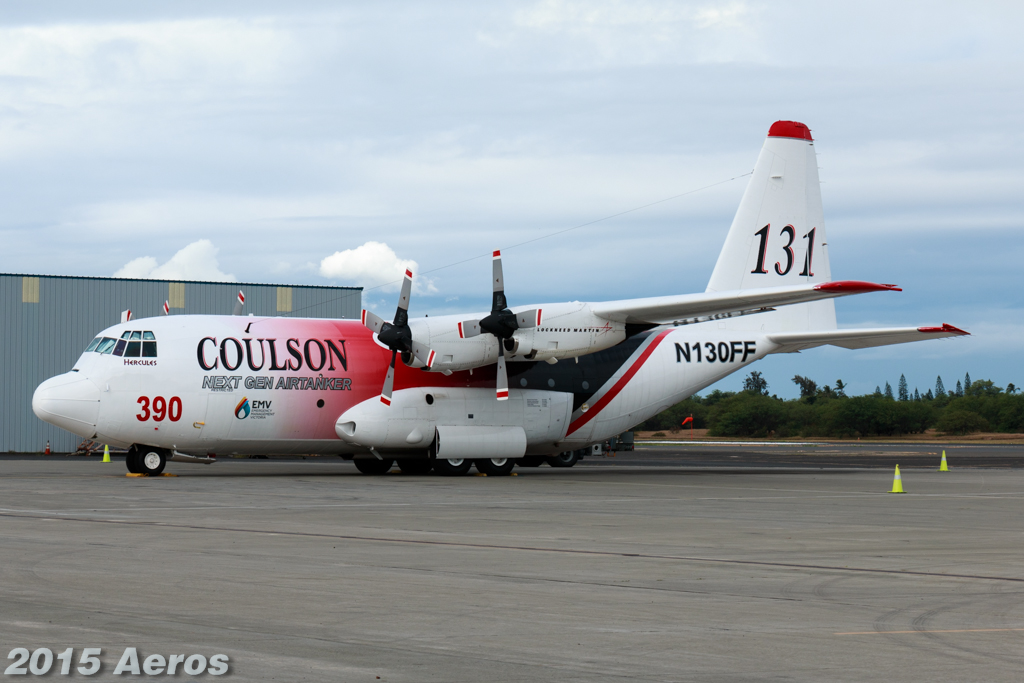 Coulson's firefighting EC-130Q is making its way back to YYJ [Victoria, British Columbia, Canada] after spending a few months in Australia supporting the local firefighting effort. N130FF (msn 382-4901) transited through HNL this past December on its way to Australia.
Posted by Aeros at 20:23 No comments:

The Pacific Business News reports that Aeroméxico [AM/AMX] is exploring the possibility of serving HNL from MEX [Benito Juárez International Airport, México City, México] , seasonally. It is in preliminary stages to see whether the service would be feasible, nor did the airline reveal which aircraft type it would use. Contrary to the article's claim that MEX is 320 miles closer to HNL than LAX, the Great Circle Mapper shows that HNL-LAX is 2221 nm, while MEX-HNL is 3299 nm. 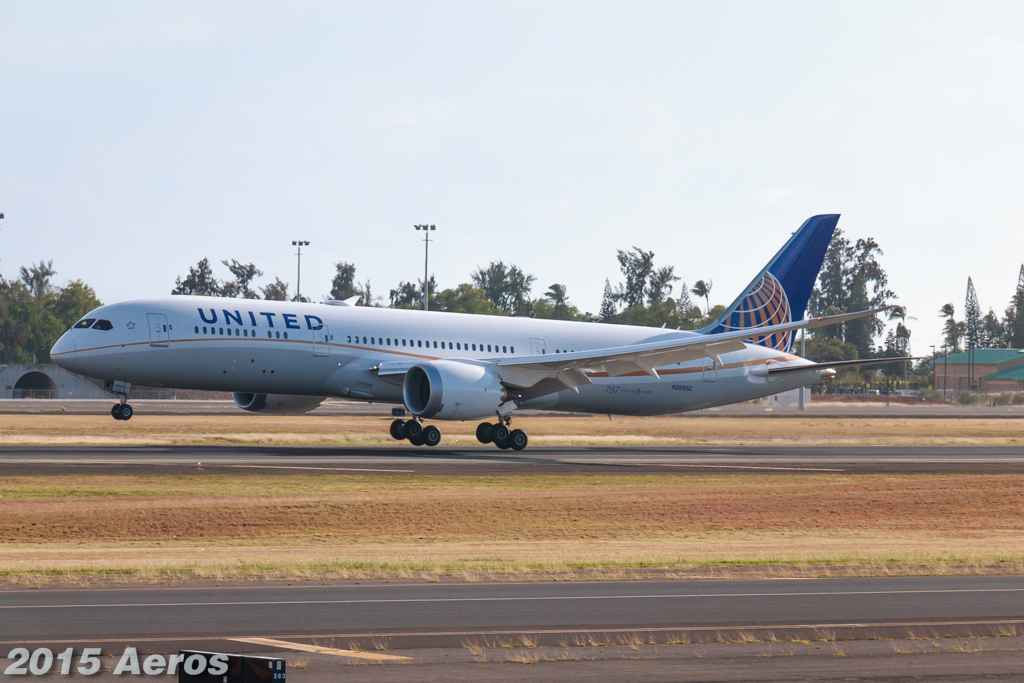 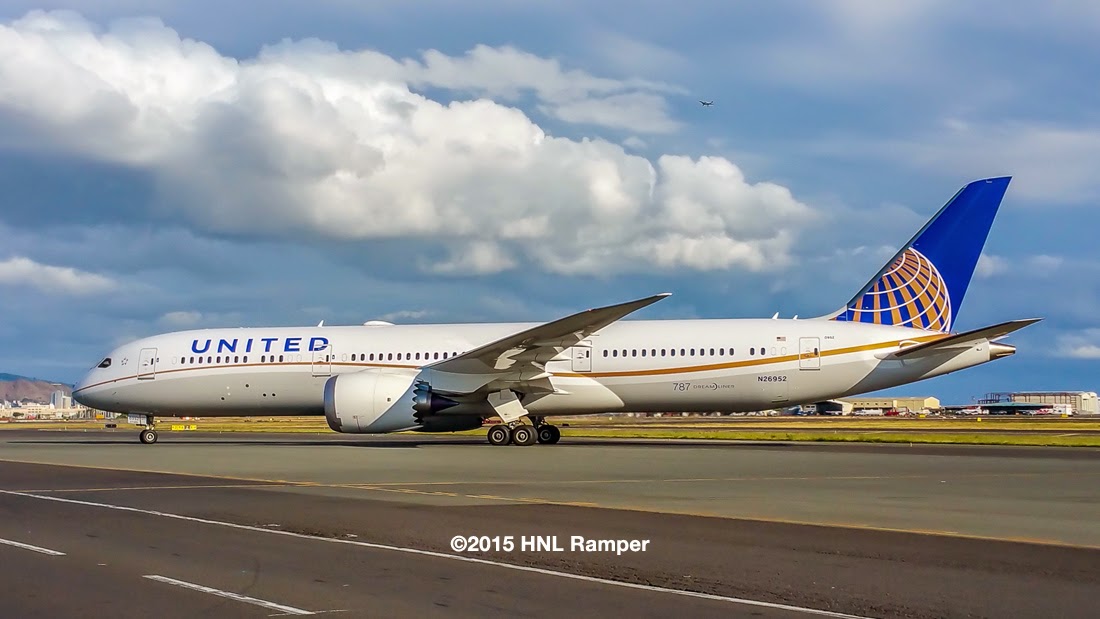 Mahalo to team members Aeros for the top photo and HNL Ramper for the above photo.
Posted by Blue Wave 707 at 11:44 2 comments: 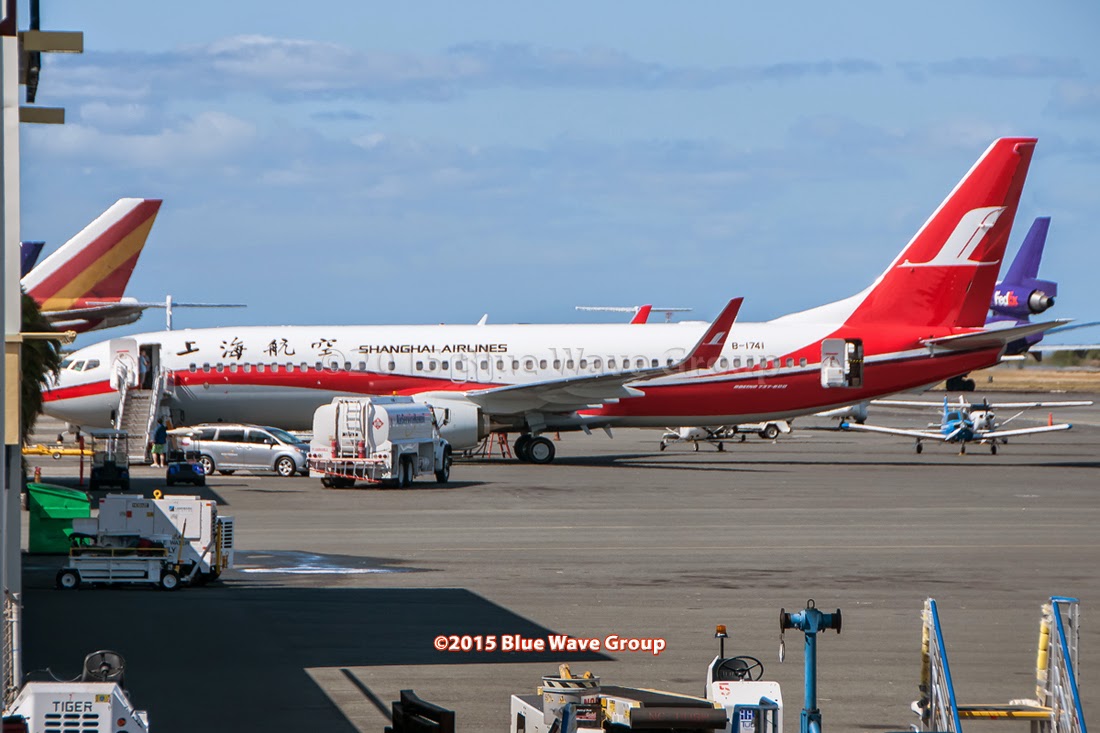 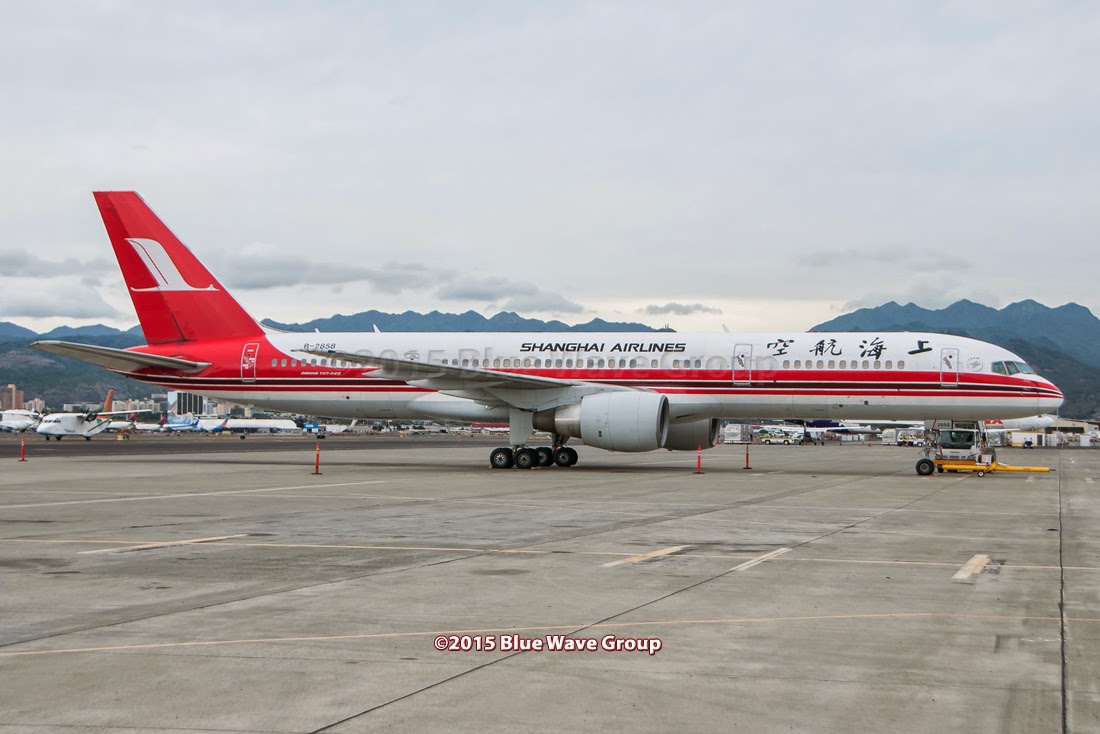 According to CH-Aviation.com, WestJet Airlines revealed that a former Qantas 767-338ER, VH-OGJ (c/n 25274, l/n 396) will be their first wide-body airliner. This is the first of four 767-300ERs the Canadian airline will obtain to use for winter service between Alberta and Hawai‘i, and will replace the wet-lease agreement the airline had with Thomas Cook Airlines. It will be registered as C-FOGJ with WestJet.

25274 was delivered to Qantas Airways in October 1991, named "City of Port Macquarie". In October 2002, it was leased to Qantas' new subsidiary Australian Airlines [AO/AUZ], and was there for four years. It was returned to Qantas, then withdrawn from service in October 2014, and stored at VCV. It's currently undergoing maintenance and Blended Winglet installation in Louisiana.
Posted by Blue Wave 707 at 14:00 No comments:

Mokulele To Lease Out Three Caravans 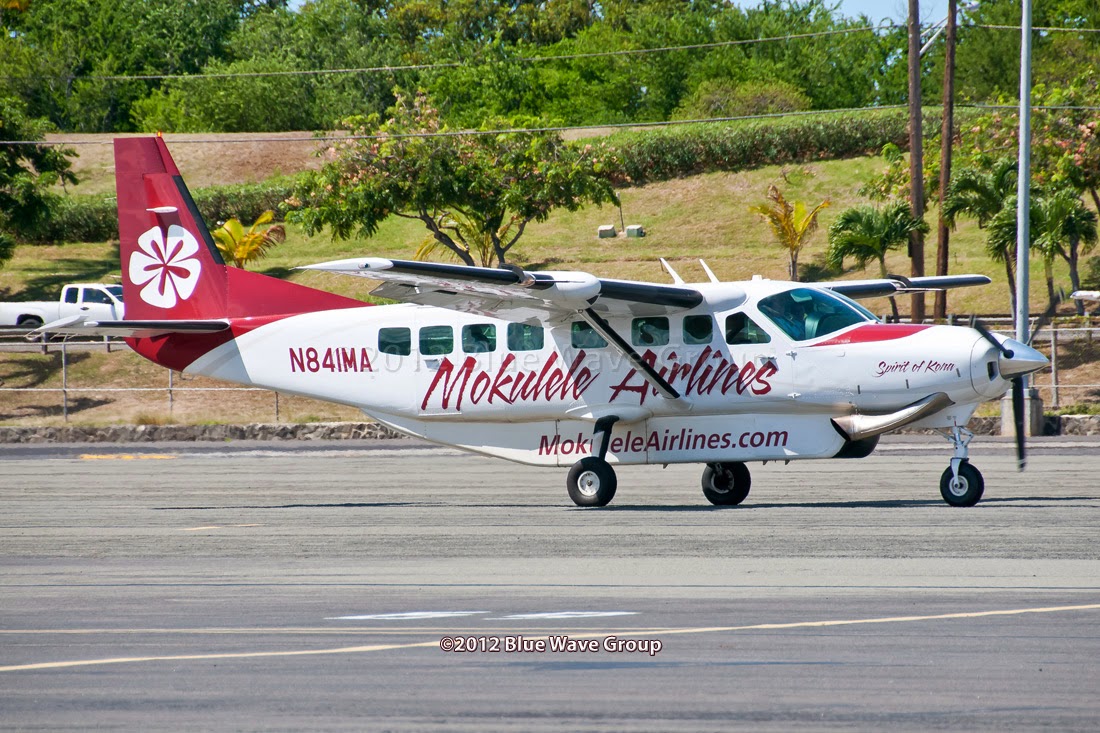 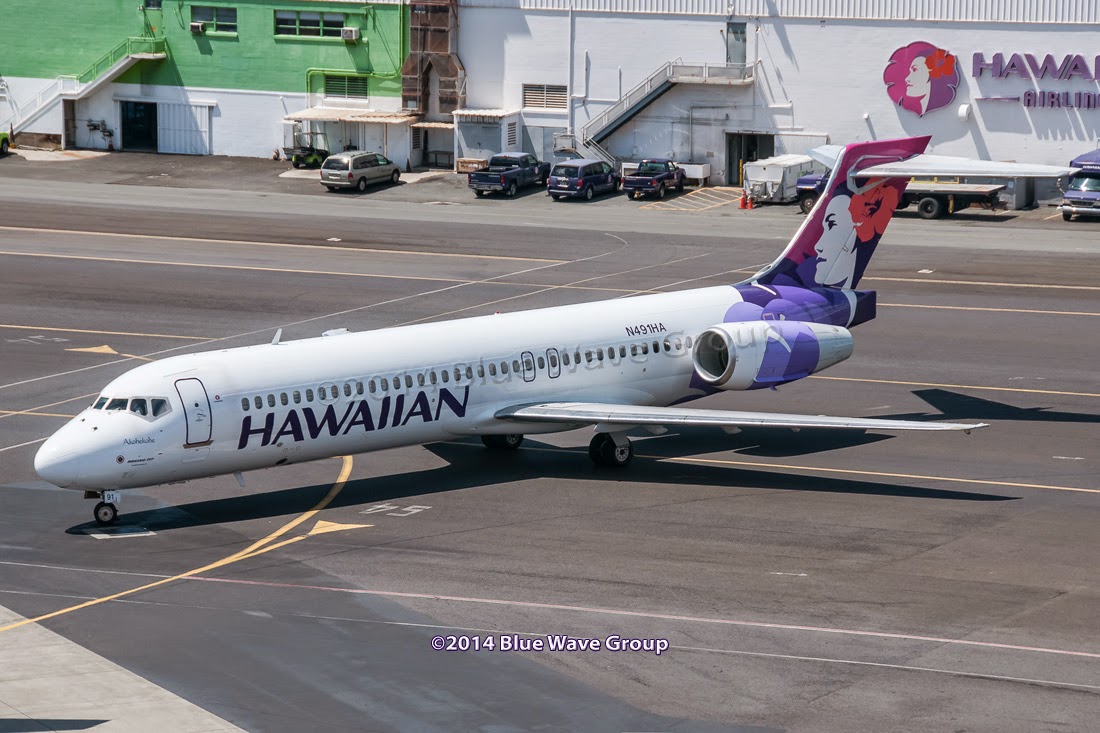 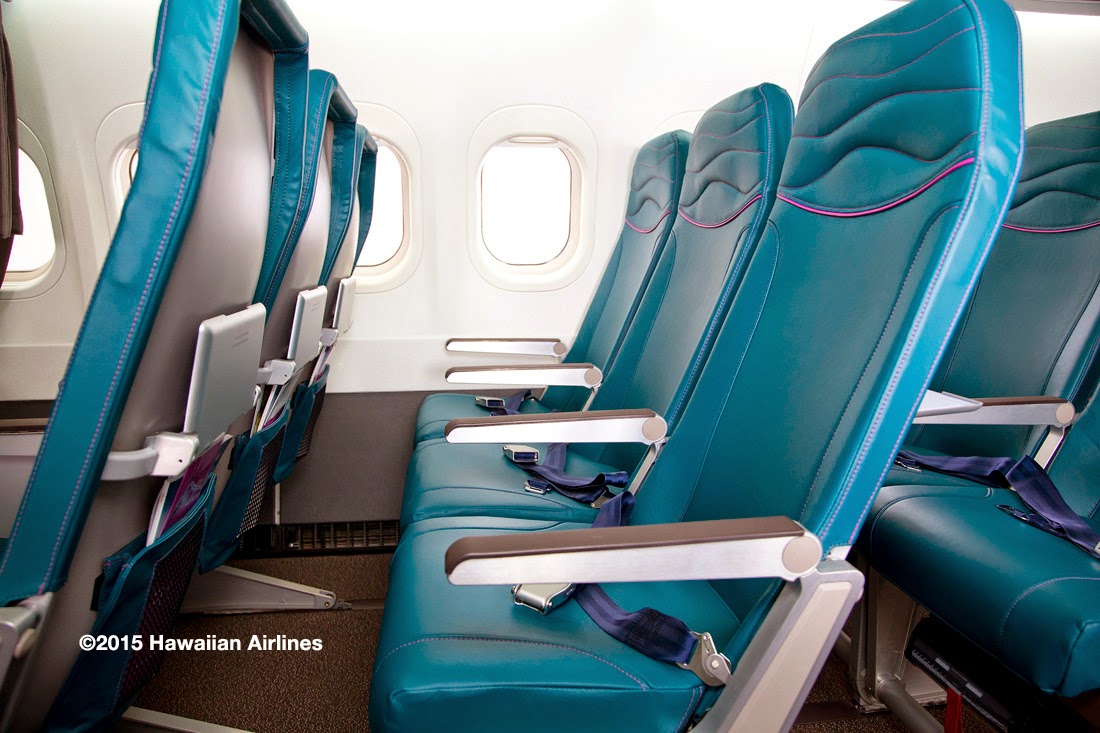 Hawaiian Airlines announced today that they are in the process of retrofitting all of their 18 inter-island 717-200 fleet with new main cabin seats made by Acro Aircraft Seats (above photo), along with a new interior color palette.

Further information in this Hawaiian Airlines press release.
Posted by Blue Wave 707 at 09:23 No comments: 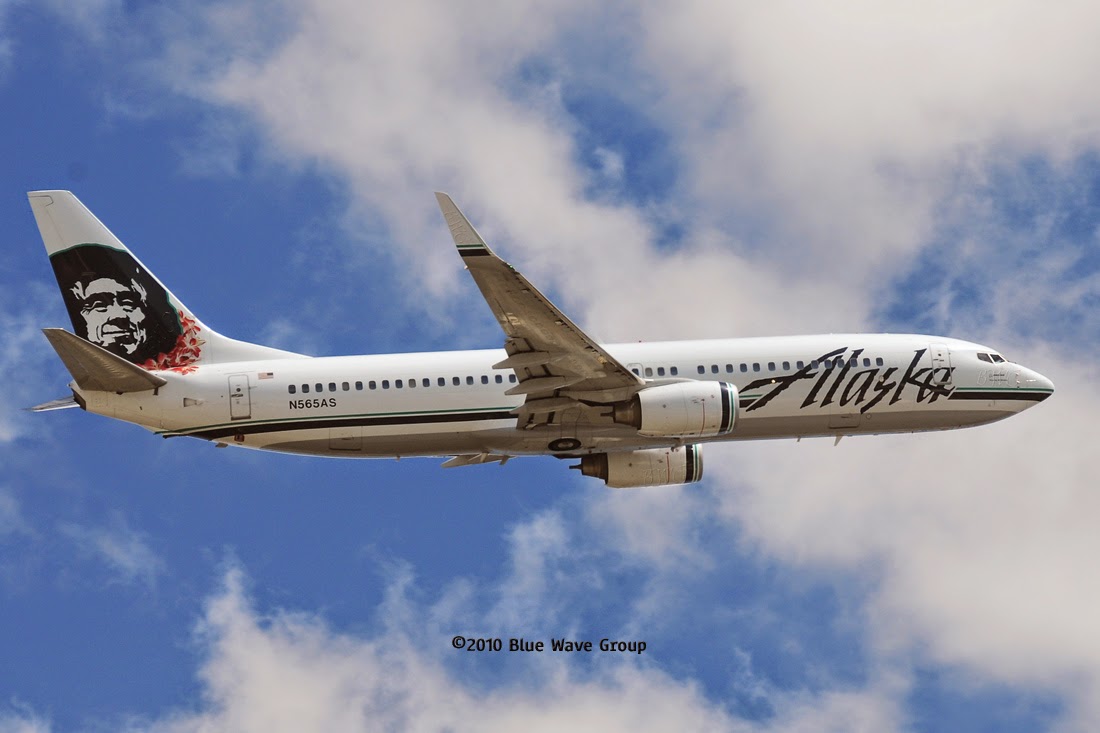 Further information in this Alaska Airlines press release.
Posted by Blue Wave 707 at 08:24 No comments: 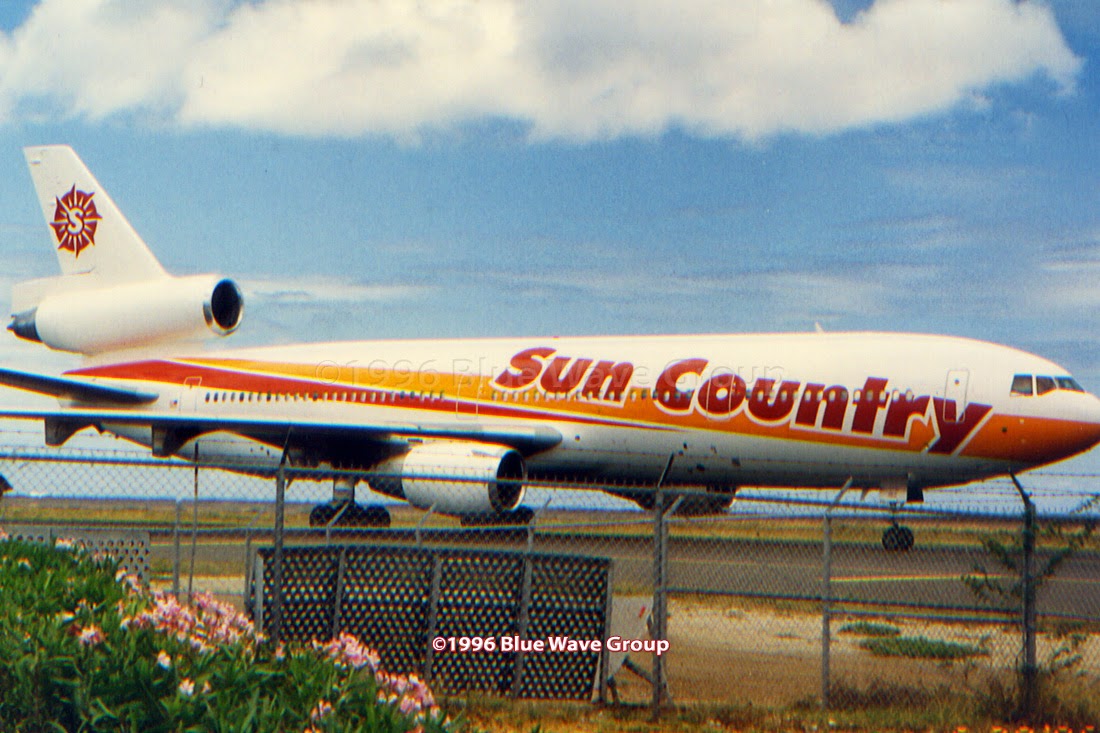 Our March edition of "HNL RareBirds Classic" goes back to May 1996, and this Sun Country Airlines DC-10-15, N152SY (c/n 48289, l/n 365) seen above on Taxiway RT returning to the main terminal after an in-flight emergency. This particular flight departed for LAX, but had to return as the main landing gear canted forward, and could not retract. The flight crew made a 500-foot high pass in front of the HNL control tower, along the Runway 8L path, to verify the position of the main landing gear. HNL ARFF trucks from HNL's Station 2, abeam Runway 8R, stood by as the DC-10 flew out to dump fuel before landing on the Reef Runway without incident.

For a short period of time in the mid-1990s, Sun Country had DC-10-10 service between HNL and LAX. The livery seen above is the one prior to the current blue livery.