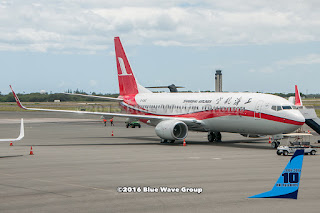 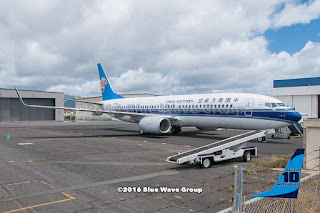 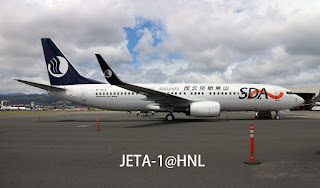 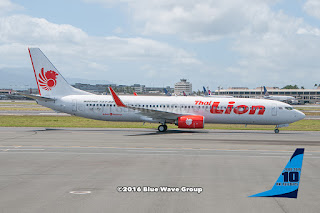 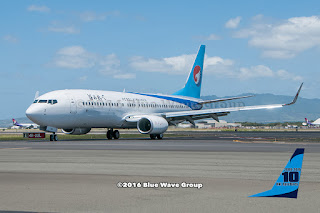 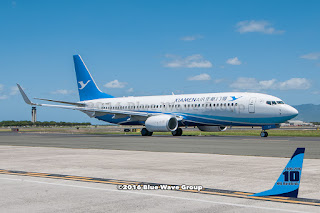 Malaysia Airlines has placed an order with Boeing for 25 737 MAX8s, and hold the option for 25 more MAX8s or MAX9s. No date was given for delivery of their first MAX8.
Posted by Blue Wave 707 at 12:39 No comments: 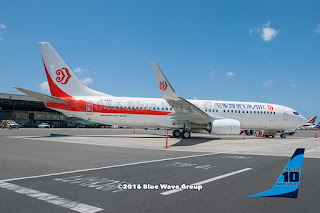 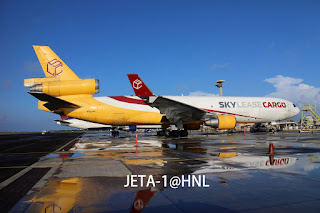 48461 was originally delivered to China Eastern Airlines under lease from GECAS in November 1991 as B-2170, and was transferred to China Cargo Airlines [CK/CKK], when the airline was re-branded. Sky Lease Cargo [GG/KYE] (USA) acquired this MD-11F in May 2010 as N950AR, and operates it for Centurion Cargo. 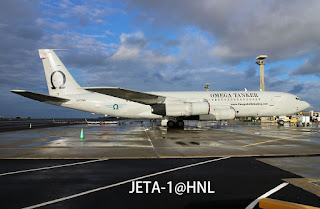 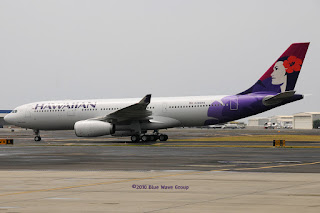 Hawaiian Airlines launched daily A330-243 service between HNL and NRT today with HAL821, and an early afternoon departure. N380HA is making today's inaugural flight.  The return flight, HAL822, will arrive at HNL in the morning along with the other flights from NRT.
Posted by Blue Wave 707 at 14:47 No comments: 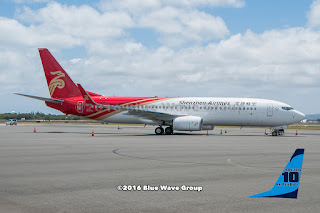 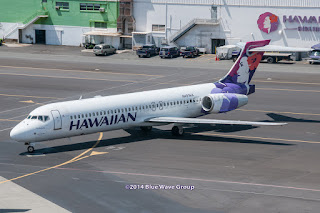 Hawaiian Airlines announced today that they will lease two 717-200s that will be delivered in early 2017. These two airliners will come from the Volotea Airlines [V7/VOE] (Spain) fleet, as they transition to the A319. Koa‘e Kea (white-tailed tropic bird) and ‘Akiapola‘au (Hawaiian honeycreeper) will be the Hawaiian names for the two 717s, and the airline has reserved N494HA and N495HA.

Further information in this Hawaiian Airlines press release.
Posted by Blue Wave 707 at 15:27 No comments: 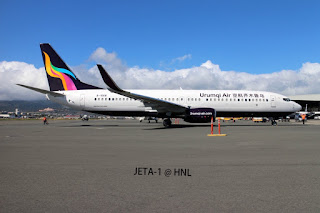 This 737-8EH was originally ordered by GOL Transportes Aéreos as PR-GYE, but was not taken up. It was acquired by the Bank of Utah as N724AC in February 2016, and stored at CWF [Lake Chennault International Airport, Lake Charles, Louisiana]. Urumqi Air acquired it this month.
Posted by Blue Wave 707 at 17:20 1 comment: 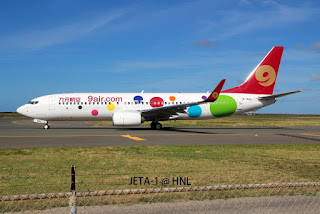 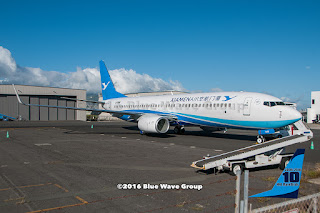 
Boeing aircraft began flying to Hawai‘i with the Boeing 314 Clippers, with Pan American Airways. As more airlines began serving the Hawaiian Islands, the Boeing 377 Stratocruiser made trans-Pacific flights from the mainland by United Airlines, Northwest Airlines, and Pan Am.

Ushering the jet age, a Qantas Airways 707-138 made the first passenger jet flight to HNL, and opened the door Pan Am, Trans World Airlines, Western Airlines, Continental Airlines, and American Airlines, to serve HNL with 707 flights. South Pacific Island Airways and AeroAmerica were the last airlines with 707 service.

Continental's Air Micronesia was the only airline to have passenger 727 service that lasted until the late 1990s.  Currently, Asia Pacific Airlines has 727-200 freighters serving HNL.

At the time, Aloha Airlines was the the only inter-island carrier to bring the Boeing 737 to Hawai‘i. Beginning with the -100, the airline had -200s, -300s, 400s, and -700s in their fleet until its closure in 2008. Continental began 737-800 service with their "Air Mike" routes to replace aforementioned 727 flights. Presently, Alaska Airlines, Delta Air Lines, United Airlines, WestJet Airlines, and Fiji Airways have trans-Pacific 737NG flights; and Aloha Air Cargo has 737-200 and -300 cargo flights, and Trans Air has -200 cargo flights within the islands. Hawai‘i is also the first stop for Pacific island-hopping 737 delivery flights.

Pan Am and United were the first airlines to serve HNL with the 747. Continental, TWA, Northwest Airlines, Japan Airlines, China Airlines, Korean Airlines, All Nippon Airways, America West Airlines, Air Siam, and Air Hawaii, all served HNL with 747s at one time. Currently, Delta has the only 747-400 passenger service, with United bringing them in on fleet substitutions. On the cargo side, Atlas Air, Polar Air, UPS and Kalitta Air currently have 747F service to HNL.

The 757 has been a staple for US carriers for flights from the west coast. America West, American, Continental, Delta, Allegiant Air, Northwest Airlines, Omni Air International and United all served Hawai‘i with the 757. Presently, America, Delta, Allegiant, and United have passenger flights, and Asia Pacific Airlines has cargo flights with their 757-200F. China-bound 757 delivery flights used to make HNL a stopover point from BFI.

The 767 replaced many tri-jet and 747 flights.  American, Delta, Hawaiian, All Nippon, Omni, Japan, and UPS all have 767 flights currently serving Hawai‘i. When they were in service, TWA and Continental had 767 flights serving HNL. Qantas and Air New Zealand had 767-300 service but has since replaced them.


On the military side, the Hawai‘i Air National Guard has the KC-135R Stratotanker in the 203rd ARS, and the C-17A GlobemasterIII in the 204th AS. Omega Air Tanker 707-320Bs occasionally stop through HNL while re-fueling transiting US Navy and US Marine Corps fighters across the Pacific.


There are also a couple of Boeing Stearman bi-wing training aircraft from the 1940s that are owned on O‘ahu.
Posted by Blue Wave 707 at 11:15 No comments: 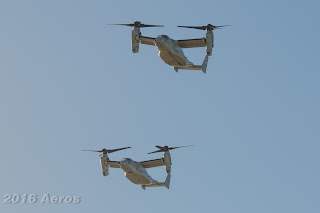 At the Farnborough International Airshow, Boeing announced that an unidentified Chinese carrier has placed an order for a mix of 737NGs and 737 MAXs.
Posted by Blue Wave 707 at 15:07 No comments:

Boeing announced today that Kunming Airlines has signed a Memorandum of Understanding for an order of ten 737 MAX 7s, at the Farnborough International Airshow.
Posted by Blue Wave 707 at 15:06 No comments:

At the Farnborough International Airshow, Boeing announced that Donghai Airlines has signed an Intent to Purchase for 25 737 MAX 8s and five 787-9s. Donghai currently has an outstanding order for 15 737-800s and ten 737 MAX 8s, and have two 737-83Zs on the BFI flightline ready for delivery.
Posted by Blue Wave 707 at 15:03 No comments:

Boeing announced at the Farnborough International Airshow that Xiamen Air signed an Memorandum of Understanding to purchase up to 30 737 MAX 200s. The new Boeings could be allocated to its Jiangxi Airlines and Hebei Airlines subsidiaries. This MoU still needs approval from the Xiamen Air board, China Southern Airlines board, and the Chinese government.
Posted by Blue Wave 707 at 14:55 No comments: 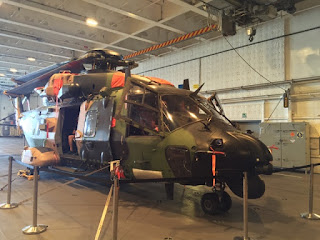 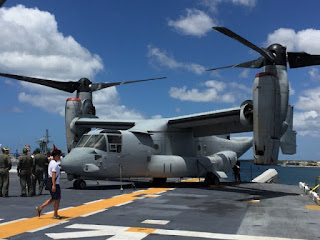 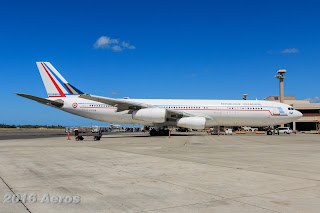 Occasionally one of two A340-212s of the Armee De L`Air passes through Honolulu to and from French Polynesia. F-RAJB (c/n081) arrived this morning and took on fuel before continuing on.
Posted by Aeros at 19:01 No comments: 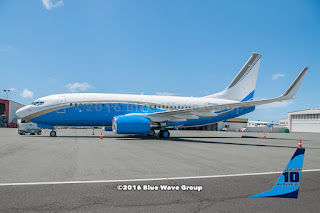 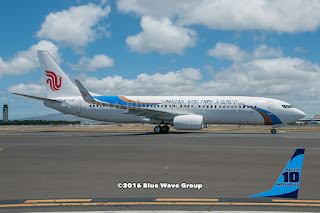 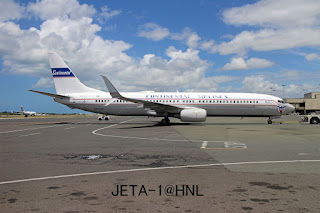 Today, the HNL RareBirds Team celebrates the United States of America's 240th birthday!
Posted by Blue Wave 707 at 02:40 No comments: 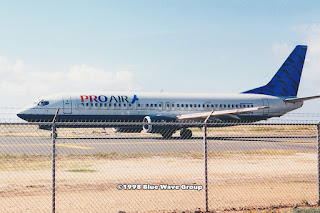 28494 was originally purchased by Boullioun Aviation Services (BouAS), and leased to China Airlines in December 1996 and registered as B-18677. In December 1998, BouAS leased it to Pro Air [XL/PRH] as N462PR. In April 2005, it was leased to Czech Airlines [OK/CSA] (Czech Republic) as OK-BGQ. In March 2006, it was leased to Aegean Airlines [A3/AEE] (Greece) as SX-BTN. In April 2009, it was leased to Aeroflot-Don [D9/DNV] (Russia) as VQ-BCS, and five months later, the airline's name was changed to Donavia, as part of Aeroflot's restructuring and re-branding of its regional airlines. VQ-BCS was also sold to the Aviation Capital Group, and the lease was continued with Donavia. In mid-2014, 28494 was converted to a freighter at MIA, and sold to Farnair [FAH] (Hungary) in September 2014 as HA-FAU. In June 2015, it was transferred to ASL Airlines [FAH] (Hungary), and continues to fly with ASL.
Posted by Blue Wave 707 at 04:30 No comments: