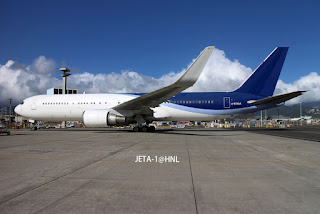 26265 was originally purchased by ILFC, then leased to Asiana Airlines in March 1995 as HL7249. In September 2002, it was leased to Air Atlanta Icelandic as TF-ARB "Aida", then sub-leased to Southern Winds. In October 2003, it was leased to LAN Chile as CC-CEN. The airline re-branded as LAN Airlines in October 2004. It was then sub-leased to LAN Argentina from July 2006 to March 2008 as LV-BFD. When it returned to LAN Airlines, it was re-registered as CC-CXL. Blended Winglets were added in May 2011. In May 2014, it was sold to AerCap, and remained with LAN Airlines. In May 2016, LAN merged with Brazil's TAM to form LATAM Airlines, and CC-CXL was transferred to the Chilean subsidiary. In June 2016, it was withdrawn from service, and leased to Atlas Air as N639GT, and stored at GYR.
Posted by Blue Wave 707 at 12:07 No comments: 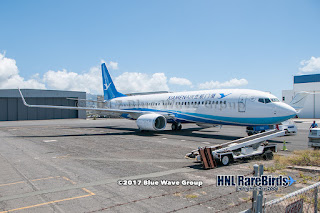 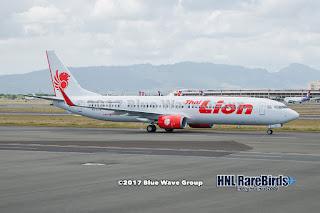 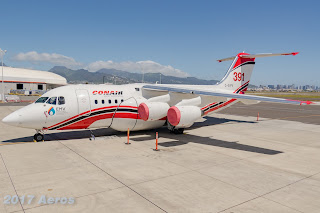 After another Summer Fire Season in Australia, Conair's C-GVFK (s/n E2268, l/n 391) is flying back to home base Abbotsford (CYXX/YXX) in Canada. The RJ-85 flew in from it's Summer base of Avalon (YMAV/AVV), in Victoria, Australia via Brisbane (YBBN/BNE),  Honiara International (AGGH/HIR, former Henderson Field) in the Solomon Islands, and Marshall Islands International (PKMJ/MAJ) before landing last night in Honolulu. 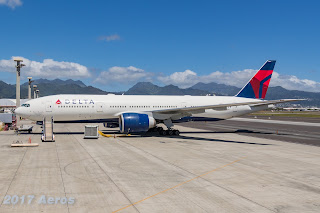 It continued onto Sydney later in the evening as flight 41A.
Posted by Aeros at 18:22 No comments: 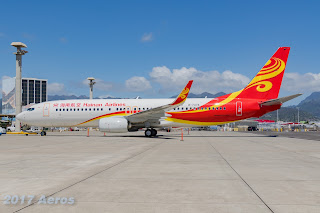 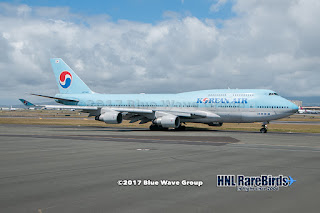 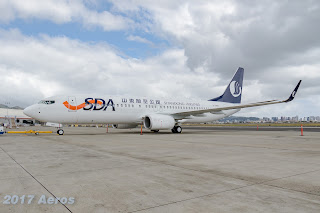 The Hawai‘i Department of Transportation (HDOT) broke ground today on the first phase of terminal modernization at the Elison Onizuka Kona International Airport at Keahole [KOA]. The $75 million project will streamline operations, and enhance passenger experience.

Further details in this HDOT news release.
Posted by Blue Wave 707 at 20:18 No comments: 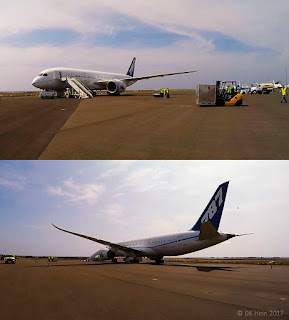 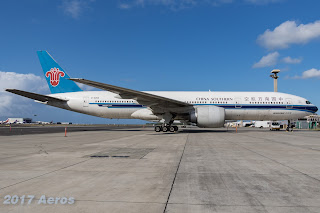 Virgin America Brand To Disappear In 2019

Further details in this Alaska Airlines press release.
Posted by Blue Wave 707 at 13:09 No comments:

Hawaiian Airlines To Relocate At LAX 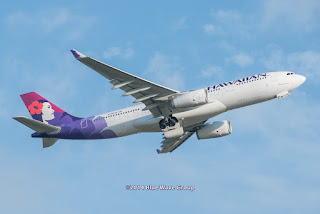 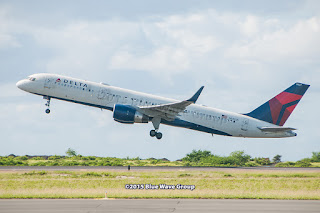 In May 2017, there will be a major shift of airlines operations at LA, with Delta Air Lines' moving from LAX's Terminals 5 and 6, to Terminals 2 and 3. As part of this undertaking, Hawaiian Airlines will move their operations from Terminal 2 to Terminal 5, which they will share with JetBlue, Spirit Airlines, Allegiant Air, Frontier Airlines, Sun Country Airlines, and American Airlines.

During the transition period, and the weeks following, departing passengers are advised to check-in online, print their own boarding passes, and check terminal and gate information prior to arriving at LAX.

Further details in this LAWA.org news page, and the LAX relocation website.
Posted by Blue Wave 707 at 09:02 No comments: 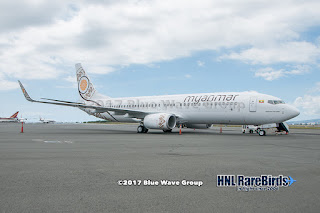 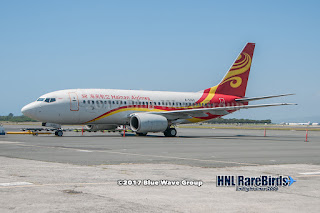 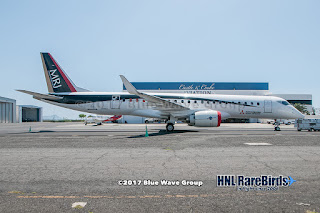 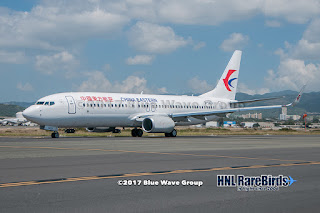 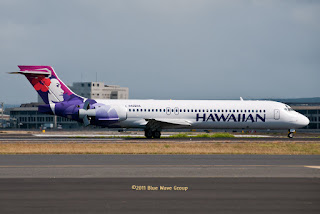 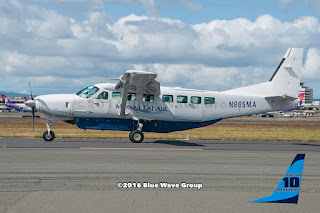 Makani Kai Air's C208B Grand Caravan N865MA (msn 208B0996) was involved in a hard landing at LUP this morning. Thankfully, none of the nine passengers nor pilot were injured. N865MA suffered damage to both wings, collapsed nose gear, and propellor, and appears to be not flyable. Reports also say that there was a Cessna 172, N243SP (msn 172S8212), owned by Sky Dolphin [Honolulu, HI], that allegedly cleared the runway, but did not, which could classify this as a runway incursion. Later reports say that the C172 was in the turn-around, and the C208 pilot over-reacted, and their actions caused the accident.

Further information in this KHON2 News report.
Posted by Blue Wave 707 at 22:13 No comments:

This new simulator, along with its A330 counterpart, are the only two full flight simulators in the islands.

Further details in this Hawaiian Airlines press release.
Posted by Blue Wave 707 at 13:52 No comments: 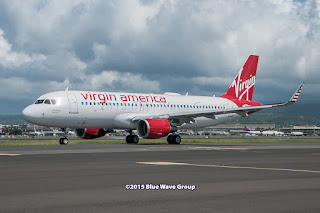 Alaska Airlines announced they are launching seven new route pairings based out the Bay Area with their Virgin America arm; one of the new routes will be daily service between SFO and KOA, that will launch on December 14th.  Alaska also announced six other new Bay Area route pairings on the mainland with their E175s.
Posted by Blue Wave 707 at 10:41 No comments:

Volga-Dnepr's RA-82046 returned to HNL, as it makes it way back to the mainland to return the AH-64E Apaches that they transported to the Avalon Airshow. It's flying as VDA2066, and will continue to IWA.
Posted by Blue Wave 707 at 07:44 No comments:

N7857B (c/n 29358, l/n 1651), a former China Eastern Airlines 737-79P (leased from AerCap), is making its ferry flight from KMG to PAE, via GUM and HNL. It will be repainted, reconfigured, and leased to Southwest Airlines. I saw it lining up for a Runway 26R departure from the H1 East freeway, in the peacock livery.

Further details in this Stripes.com article.
Posted by Blue Wave 707 at 13:12 No comments: 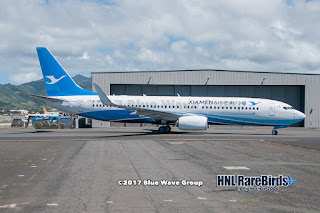 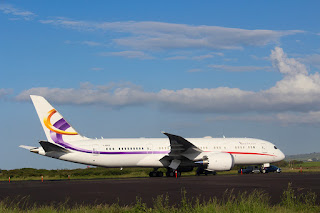 Mahalo to OGGSpotting for the photo!
Posted by Blue Wave 707 at 20:12 No comments: 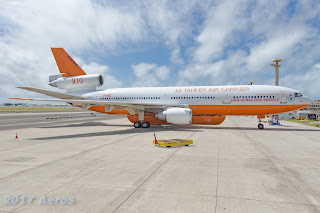 10 Tanker Air Carrier's DC-10-30ER is making its way back to the Mainland after another Australian Fire season. N612AX (s/n 48290 l/n 435) arrived this morning from RAAF Richmond, Australia NSW via Pago Pago, American Samoa.
Posted by Aeros at 19:30 1 comment: 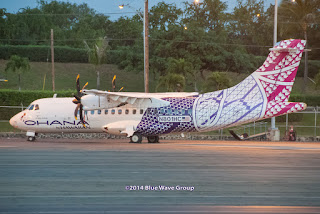 Thirty years to the day when the Kapalua Airport opened and Hawaiian Airlines began Dash7 service, ‘Ohana by Hawaiian launched its daily service between HNL and JHM today. N801HC made the inaugural flight this morning, that was greeted with a water cannon shower at JHM, after it exited Runway 20.

Further information in this Hawaiian Airlines press release.
Posted by Blue Wave 707 at 13:24 No comments: 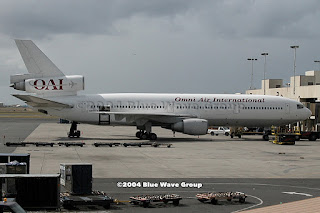 45696 was originally delivered to Condor Flugdienst [DE/CFG] in December 1979 as D-ADQO. It was painted white in the late 80s from the original bare metal livery, and flew with Condor until June 1999. Three months later, it was acquired by Omni Air International [X9/OAE] as N630AX, and flew until it was stored at VCV in October 2009. N630AX was scrapped at VCV in September 2011.
Posted by Blue Wave 707 at 10:30 No comments: 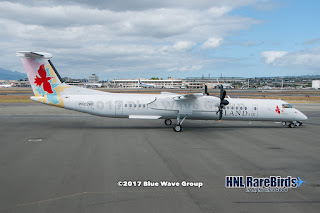 Island Air has put its second Q400 NextGen into service today. N682WP "Na‘au Pono", made its first revenue flight as MKU414 to OGG earlier this morning. Both Q400s are flying the OGG service, as well as some of the KOA flights.
Posted by Blue Wave 707 at 06:34 No comments:

United Airlines announced that they will upgrade its summer KOA-DEN (UAL1731/1758) 757-200 service from weekly to daily, effective June 8th.

Further details in this West Hawai‘i Today article.
Posted by Blue Wave 707 at 06:21 No comments: