An ex-AtlasJet Airlines A320-233, N951LF (msn 460), is making its way from VCV, via OAK for somewhere in Asia. It's flying as N951LF, and made a brief stop at HNL, before continuing onto MAJ. It's owned by ACG Acquistions XX LLC of Oakland, CA.

While with AtlasJet, it was registered as TC-OGK. It was also with Ryan International and AirTran, and LACSA.

Also lost in the tsunami warning was two Hainan Airlines 737-84P deliveries: B-5502 (c/n 35757) and B-5503 (c/n 36782). According to sources here at HNL, the pair of Hainan 73Hs did not come here as their first leg of their delivery flights. As of late, Hainan has pulled their delivery flight information from FlightAware.com. It's our assumption that they went to a neighbor island airport.

All of Hawai‘i is bracing for the tsunami that resulted from the 8.8-magnitude earthquake off the coast of Chile. With an ETA of 1105HST, Hilo would be the first area to be hit. ITO is the only Hawaiian airport to close, since it's rather close to the ocean. All other airports remain open, although the road leading to OGG is closed. HNL's "Reef Runway" is in the inundation zone, but according to the latest ATIS report it's open.

Update
The Tsunami warning for Hawaii was canceled by the Pacific Tsunami Warning Center at 13:38 HST. Only minor changes in sea level were reported.
Posted by Blue Wave 707 at 12:01 3 comments: 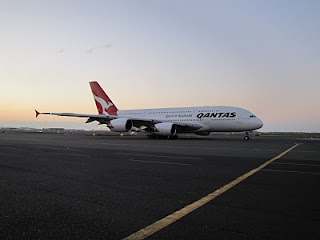 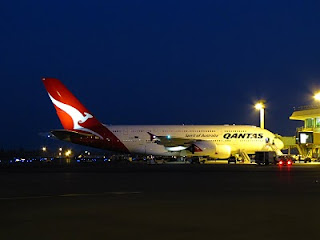 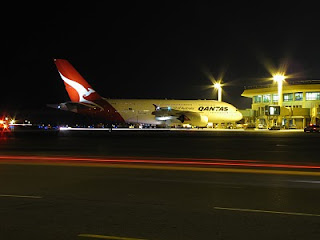 Qantas flight QFA94, an A380-842 (VH-OQE "Lawrence Hargrave", msn 027) made an emergency stop at HNL from LAX early this morning. QFA94 normally flies between LAX and MEL. According to sources, an on-board medical emergency caused the super-jumbo to stop at HNL. Sources have told me as well, that HNL Fire/Rescue trucks were standing by along Runway 4R as the A380 landed. Today's flight, however, will continue onto SYD instead of MEL.
This is the first appearance of an A380 at HNL, especially since it's not designed to handle one on a regular basis, but Gate 29 is designated as the gate to handle the Airbus should an emergency arise.
FlightAware's QFA94 flight info.
Posted by Blue Wave 707 at 05:57 2 comments: 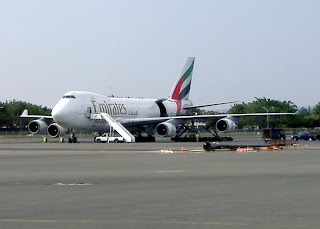 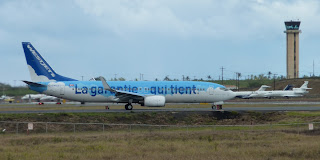 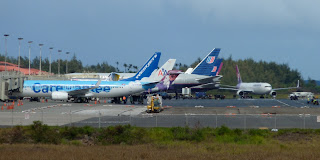 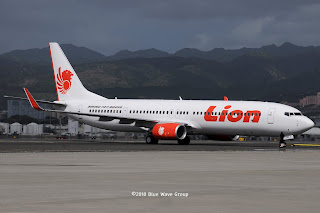 Lion Air International is taking delivery of another 737-9GPER, PK-LGS (c/n 35735), and is flying from BFI to CGK (via HNL, MAJ, and BIK) as LNI1. PK-LGS made its two-hour tech stop at HNL before continuing onto MAJ, and seen above being pushed back onto Taxiway C for its Runway 8R departure this afternoon.
Posted by Blue Wave 707 at 10:10 No comments: 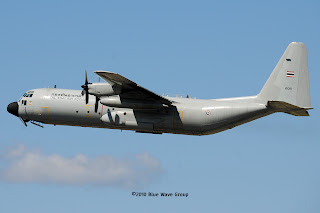 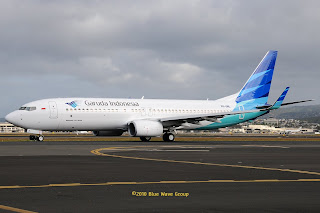 Garuda Indonesia's PK-GMK (c/n 29666), a 737-8U3, made its first delivery flight stop across the Pacific en route to CGK from BFI yesterday, and continues onto MAJ today. 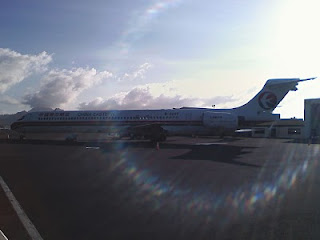 On Wednesday, February 2nd, Hawaiian Airlines had a flight to JRF (John Rodgers Field, Kalaeloa, HI) as HAL8981 using one of their 767-300s. The aircraft returned to HNL from JRF as HAL8982 this morning.

My guess is that the aircraft may have been used for filming purposes.
Posted by Blue Wave 707 at 21:55 3 comments: 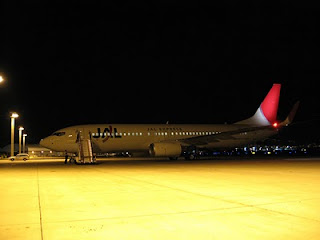 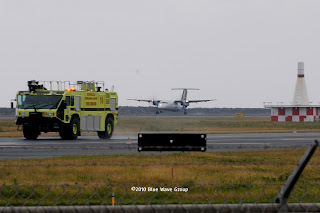 Island Air flight MKU419 (OGG-HNL) was forced to land on Runway 8R today after someone called in a bomb threat. The Dash8-100 is seen above landing on "Reef Runway", this was right before I was commanded not to take pictures by a Hawai‘i Sheriff's Department deputy.

I just happened to be there to watch planes while I ate lunch, and had my camera with me. After hearing on my scanner of the flight diversion to land on 8R, and seeing the fire trucks scramble down Taxiway RA and RT. Another spotter and myself waited to see what was about to happen. We saw the Dash8 about a mile out on a right base leg for 8R, and I popped up through my sunroof to get the landing photos. The fire trucks followed the Dash8 until it it exited 8R on Taxiway RG. Minutes after coming to a stop, and passengers and crew evacuating, Sheriff's Dept. cruisers, TSA cars, HIK fire trucks, and the HIK EOD team scrambled to the plane. An airport Wiki-wiki bus transported the passengers back to the terminal.

Fortunately, no device was found, and the investigation continues.

The above photo was also submitted to Hawaii News Now, and subsequently run online & on Sunrise.
Posted by Blue Wave 707 at 17:29 2 comments: 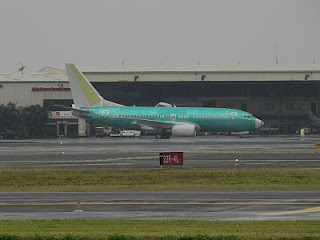 Arriving from Boeing Field as BOE222, this 737-7ES (c/n 35327) is seen here being prepped for its flight to Guam. Its showing temporary registration as N341FS. This airborne early warning and control aircraft dubbed "Peace Eye" will be the second of four that the Republic of South Korea receives.
Posted by Aeros at 14:12 No comments: