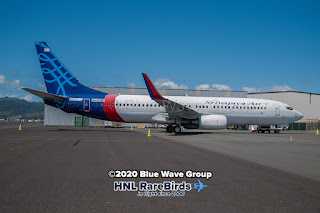 Sriwijaya Air is returning its former PK-CMW "Bersyeba" (c/n 30033, l/n 1149) to AerCap. This 737-83N is now wearing an Isle of Man registration of 2-AERK, and Jet Test is making the ferry flight. Its ferrying from XSP to MZJ, via SZB, GUM, and HNL, as JTN183.
30033 was originally purchased by ILFC, and leased to American Trans Air (then ATA Airlines) in June 2002 as N323TZ. It was returned to ILFC in April 2008 as ATA closed its doors. Four months later, it was leased to Garuda Indonesia as PK-GEG. In May 2014, it was acquired by AerCap, and the lease was transferred, until June 2016. That October, it was leased to Sriwijaya Air as PK-CMW, and flew with the airline until November 2019. A month later, it was flown to XSP for storage.
Posted by Blue Wave 707 at 13:56 No comments: 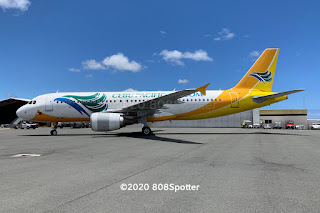 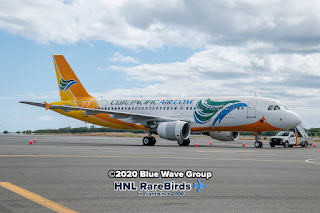 ‘Ohana by Hawaiian's fourth ATR72F, N816HC (msn 389), has repositioned from SAT [San Antonio, TX] to CDL [Couer d'Alene, ID], as Empire Airlines preps it for delivery to HNL. This ATR72-201F made the flight as CFS400. It was ferried from SNN [Shannon, Ireland] to SAT via BFS [Belfast, Northern Ireland], KEF [Reykjavik, Iceland], YYR [Goose Bay Newfoundland], BGR [Bangor, ME], and DAY [Dayton, OH] from 05 March to 08 March.
389 was originally delivered to TransAsia Airways [Taiwan] in January 1994 as B-22716. In May 2007, it was acquired by Farnair Switzerland, converted to a freighter, and registered as HB-AFN. Farnair was acquired by ASL Aviation Group, and rebranded as ASL Airlines Switzerland. In January 2016, it was transferred to ASL Airlines Ireland as EI-SLT. In February 2020, this ATR72F was purchased by ‘Ohana by Hawaiian as N816HC.
Posted by Blue Wave 707 at 11:31 No comments: 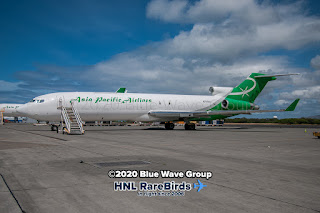 Asia Pacific Airlines is ferrying N705AA (c/n 22462, l/n 1751) from GUM to IGM (via MAJ, HNL, and OAK) as MGE900. This 727-223F/Adv is being retired, and headed for storage. It's making its final stopover at HNL tonight. Before departing GUM, N705AA received a water-cannon salute from the airport's fire/rescue department. The future for N705AA is uncertain, as it underwent a heavy maintenance check two years ago.
With N705AA's departure from the Asia Pacific fleet, this effectively ends 727 operations at HNL, though the airliner had been relegated to its GUM base since late 2018. Boeing 727 began with Continental Airlines' Air Micronesia in the 1970s.
01 Feb 2021 UPDATE
N705AA was acquired by Astral Airlines (Kenya).  It was ferried from IGM to NBO (via OPF, BGI, and DKR), from 19 -21 Jan 21. The Kenyan registration is not known.
Posted by Blue Wave 707 at 22:22 1 comment: 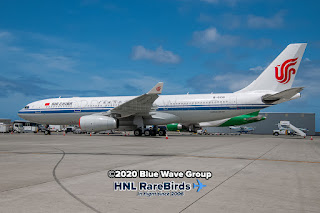 Air China's A330-243, B-6130 (msn 930), brought in the People's Republic of China's foreign ministry delegation that is scheduled to meet with US Secretary of State Mike Pompeo and his delegation, here in Honolulu. The flight arrived from PEK as CCA57.
Posted by Blue Wave 707 at 13:05 No comments: 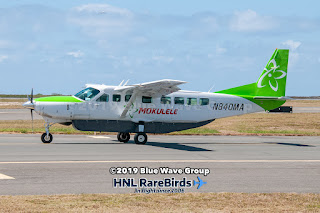 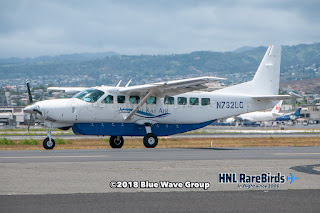 Further information in this MauiWatch.com article.
Posted by Blue Wave 707 at 22:44 No comments: 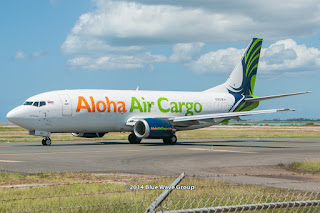 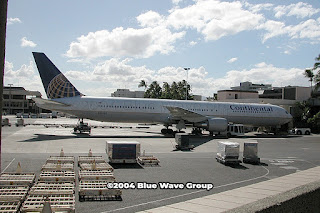 N76062 was delivered to Continental Airlines in March 2002, and was transferred to the United Airlines fleet when Continental was taken over in 2010, and given the fleet number 0062. It still flies with United, and was most-recently here on March 17th from EWR. Due to the COVID-19 pandemic, it's been parked at ROW.
Posted by Blue Wave 707 at 06:20 No comments: