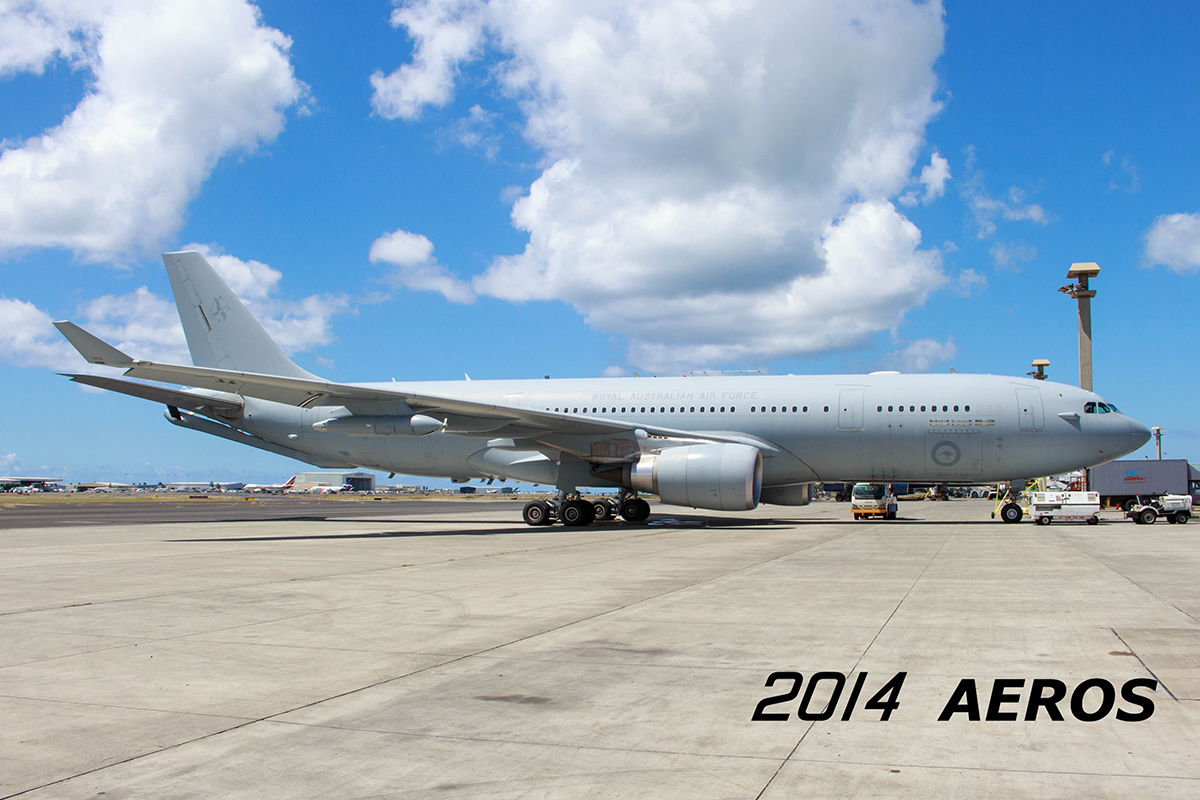 Another piece of Royal Australian Air Force equipment has visited HNL for the second week in a row. A39-002 (c/n 951) arrived yesterday afternoon from Adelaide. It is a delightful treat to see this KC-30A MRTT parked out on the North hardstands instead of Hickam.
Posted by Aeros at 18:22 No comments: 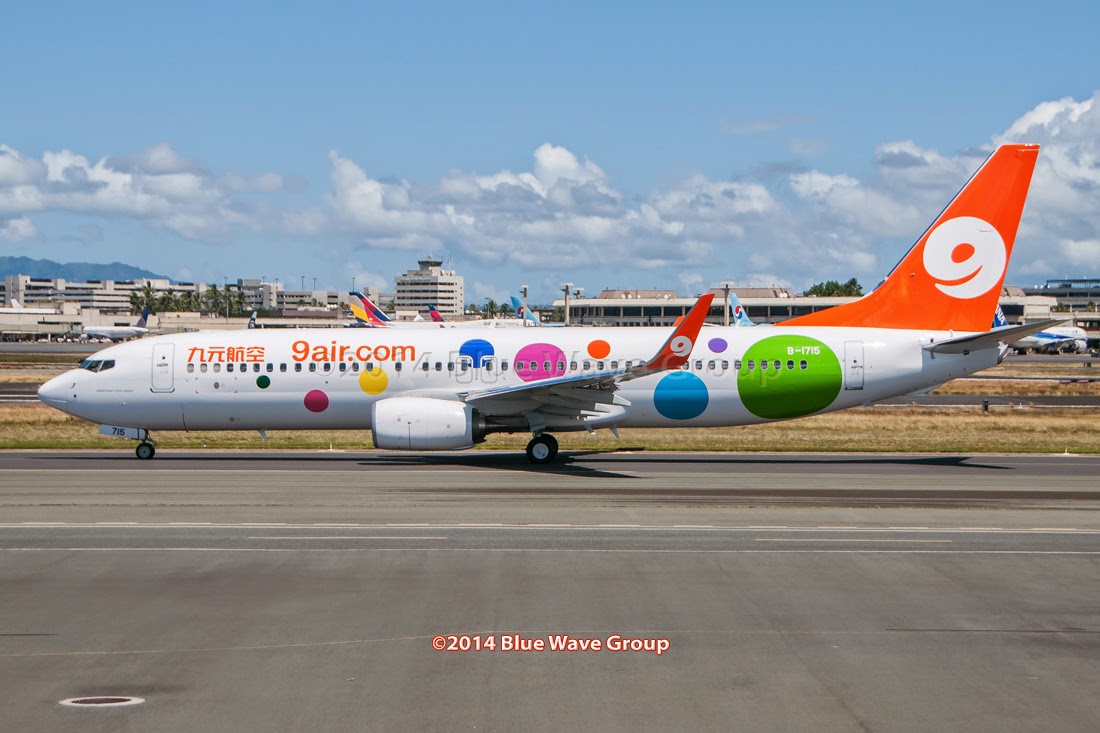 39819 was originally ordered by Lion Air as PK-LOU, but it was allocated to Transportation Partners by the Lion Group, and re-regesitered as N746DB. It was delivered to VCV on 18 July 2014 as a white tail, and orange winglets.

On a local note, the IATA two-letter airline code of AQ was previously held by Aloha Airlines, which closed in 2008.
Posted by Blue Wave 707 at 17:08 No comments: 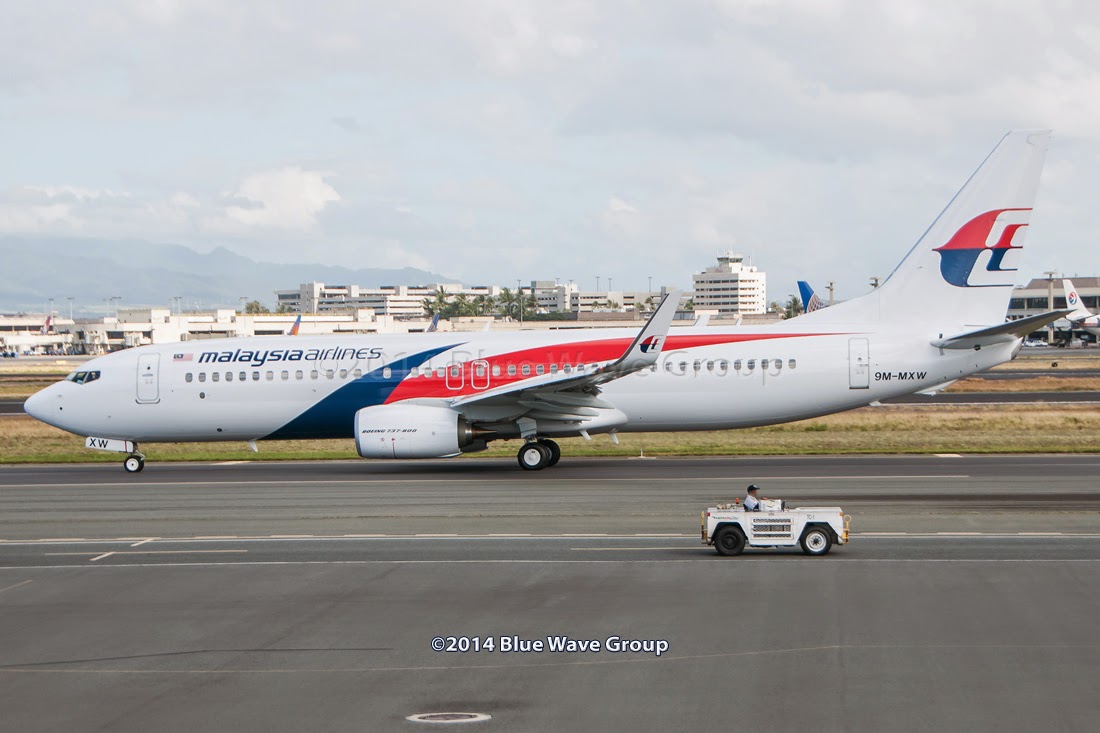 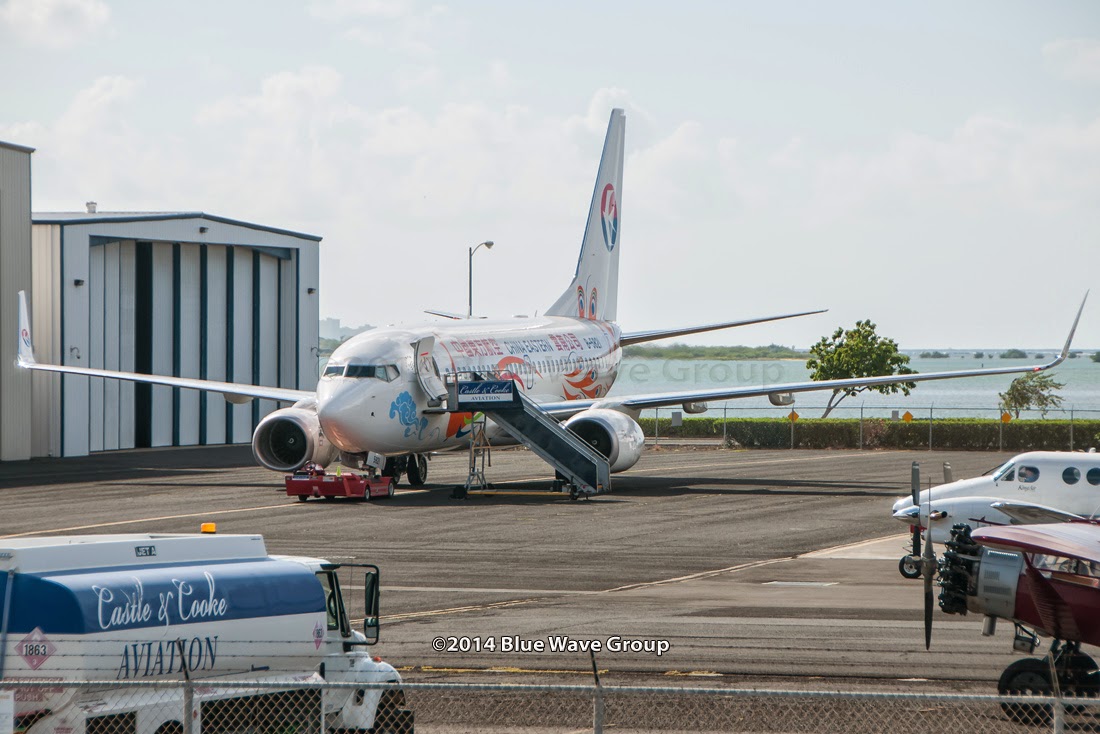 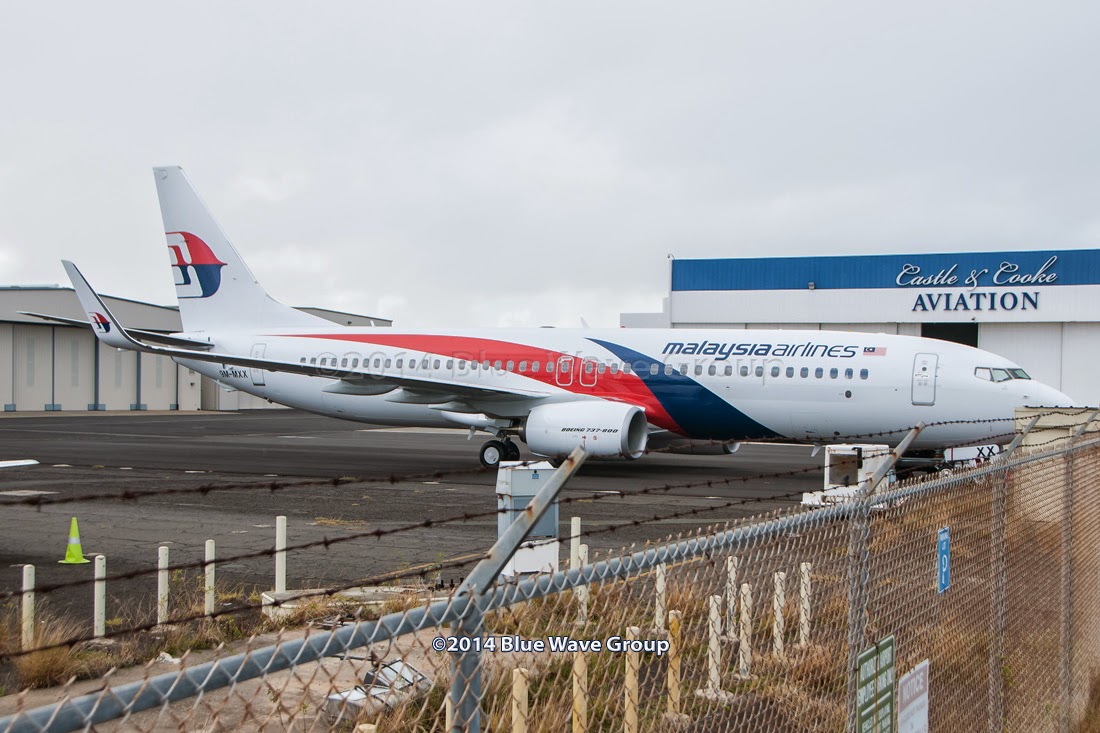 Further details in this CH-Aviation.com article.
Posted by Blue Wave 707 at 20:48 No comments: 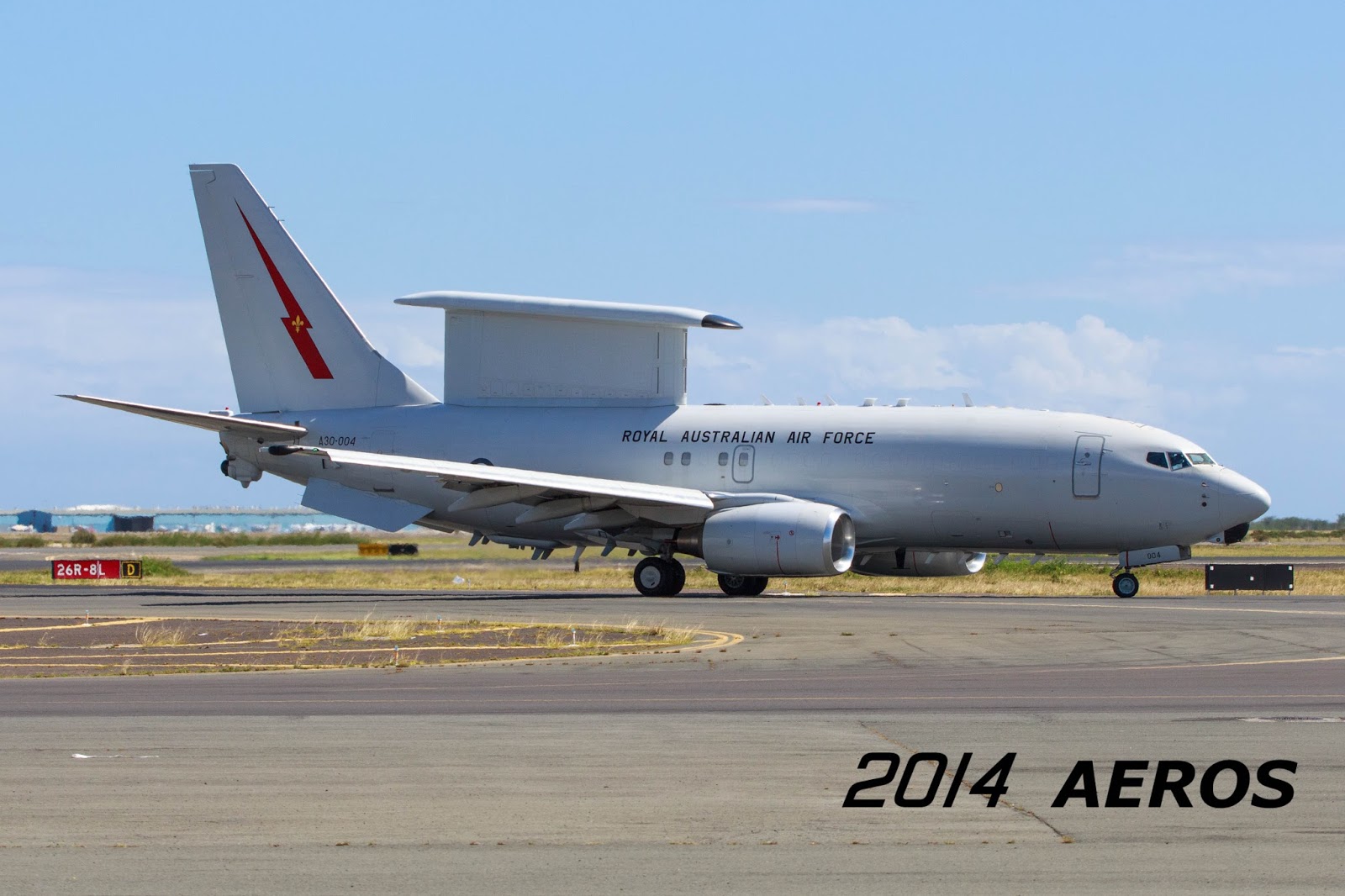 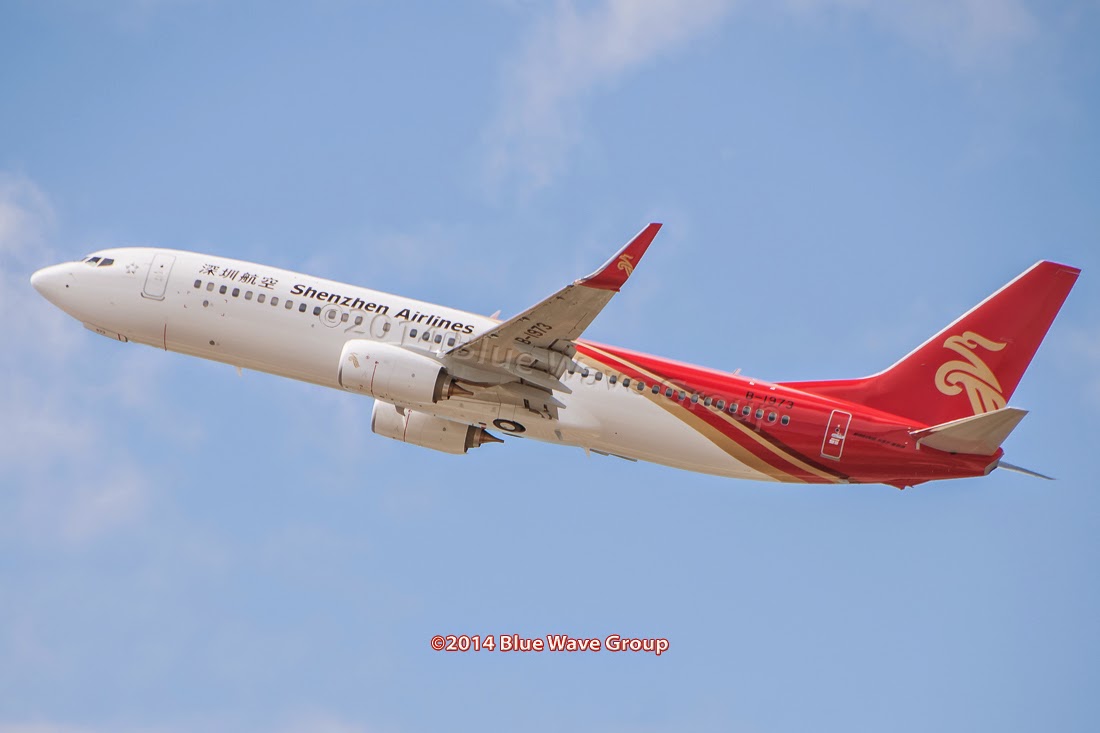 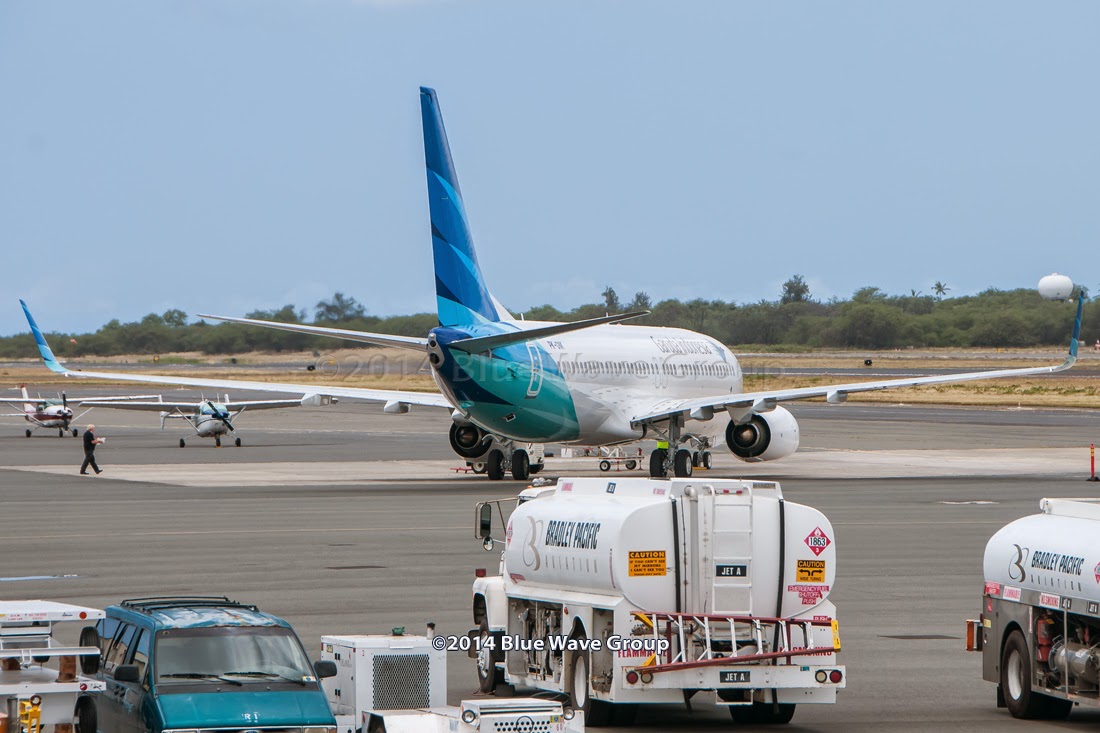 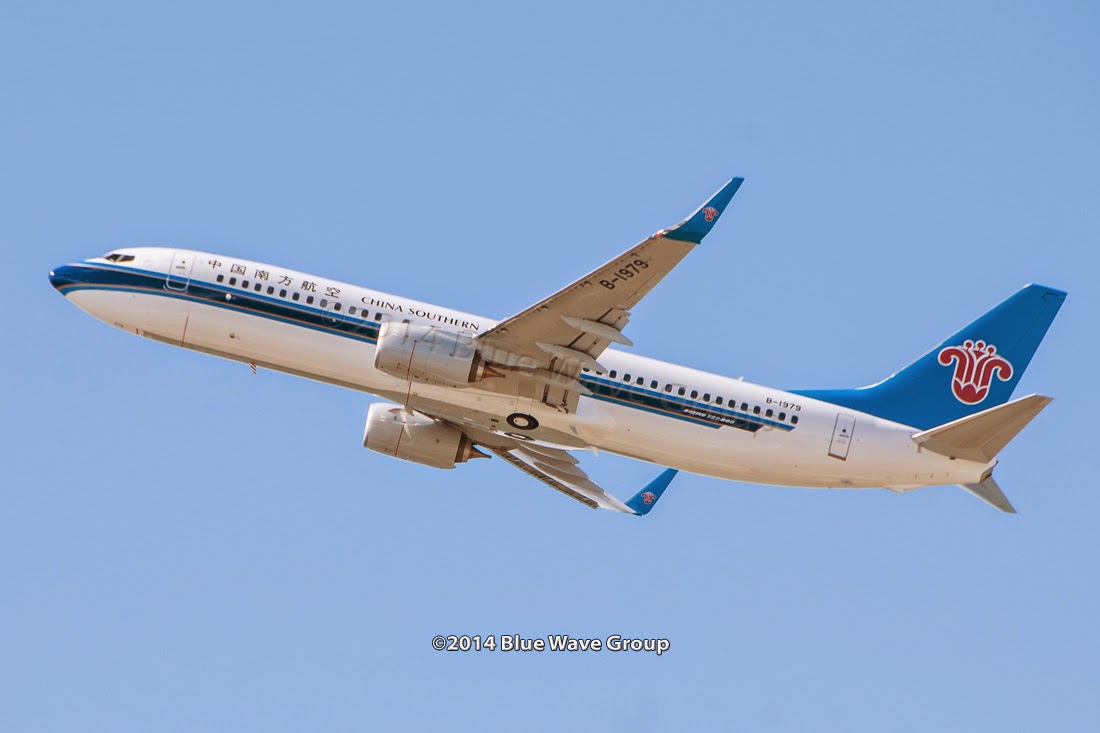 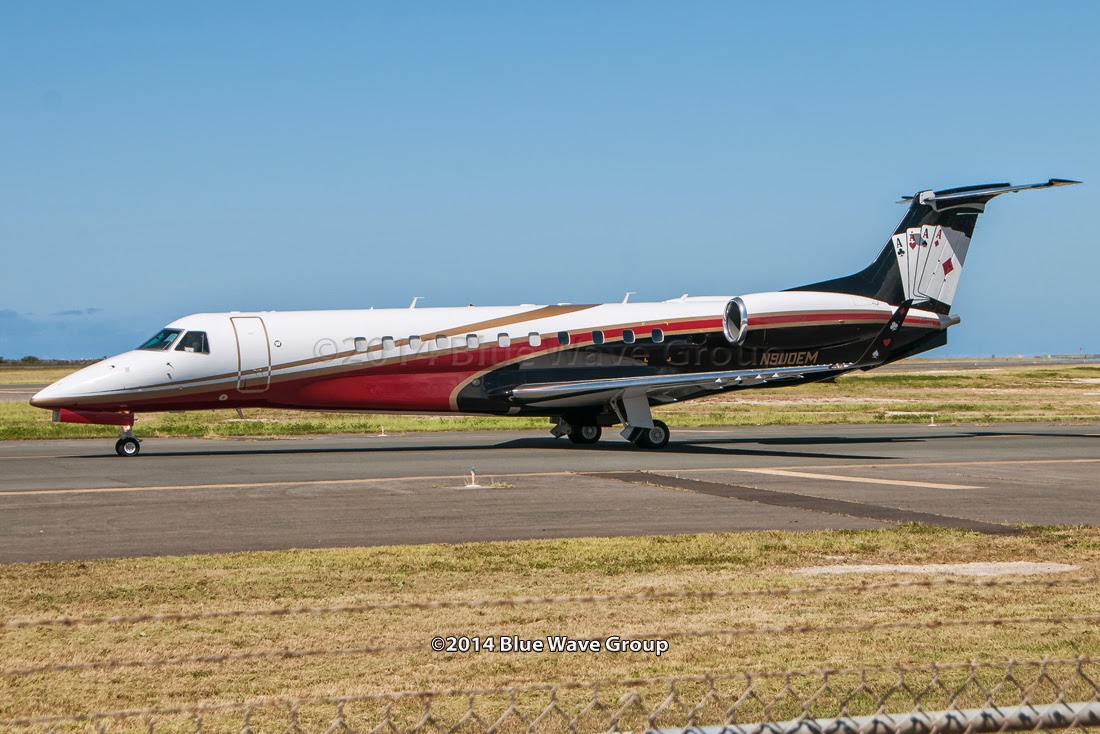 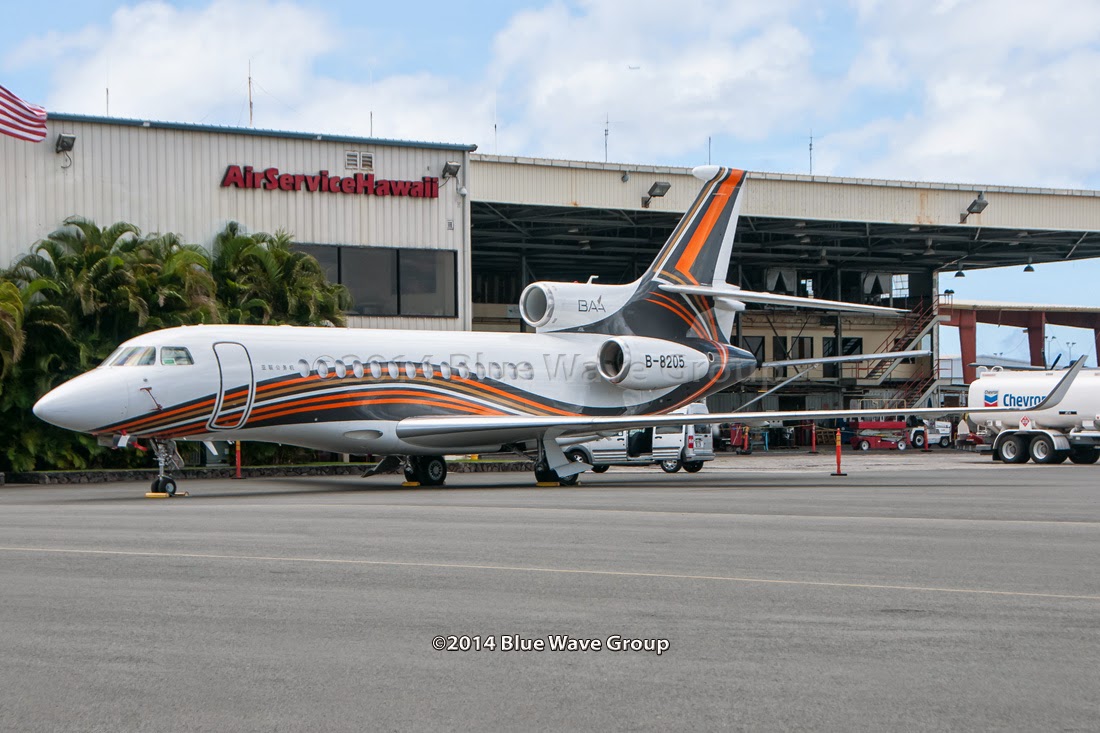 Business Aviation Asia's Falcon 7X, B-8205 (msn 209), is paying a visit to HNL. BAA is one of China's largest business jet charter companies, with a fleet of 24+ jets, including Airbus A318CJs. This Falcon 7X is the most colorful bird of their fleet, and is based in Tianjin.
Posted by Blue Wave 707 at 13:27 No comments: 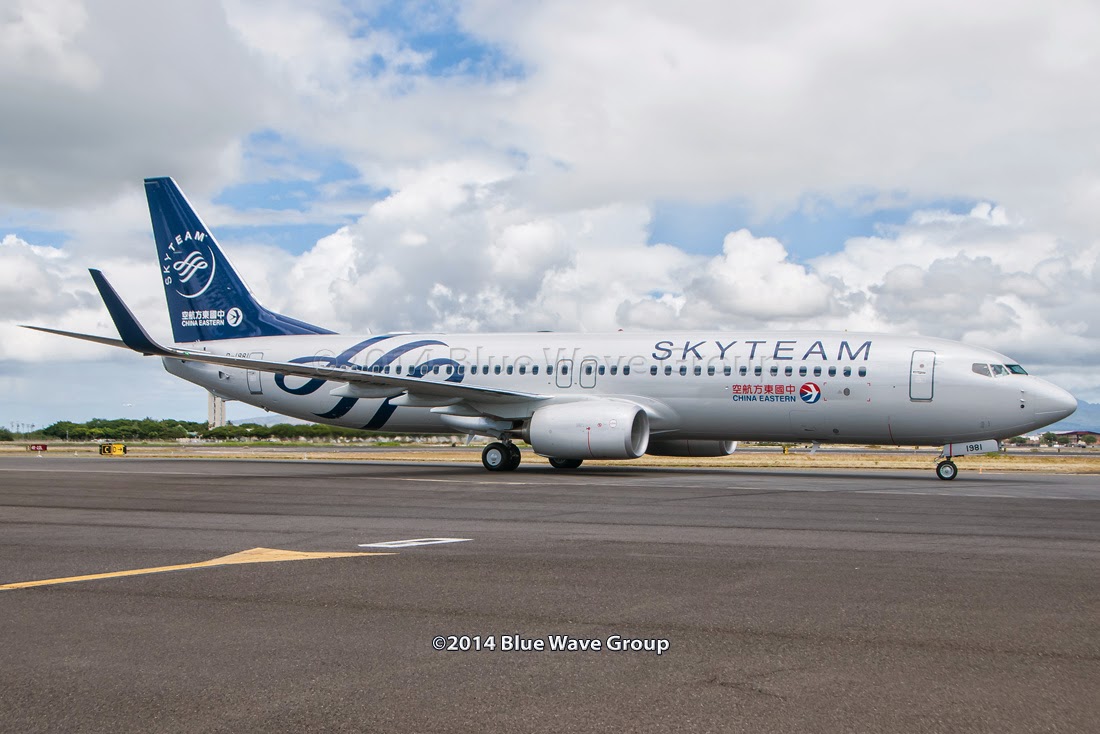 Xiamen Air is a majority partner in creating Jiangxi Airlines, a local subisidiary for the Nanchang Province, and is expected to receive five 737NGs from Xiamen.

Further details in this Centre For Aviation article.
Posted by Blue Wave 707 at 12:33 No comments: 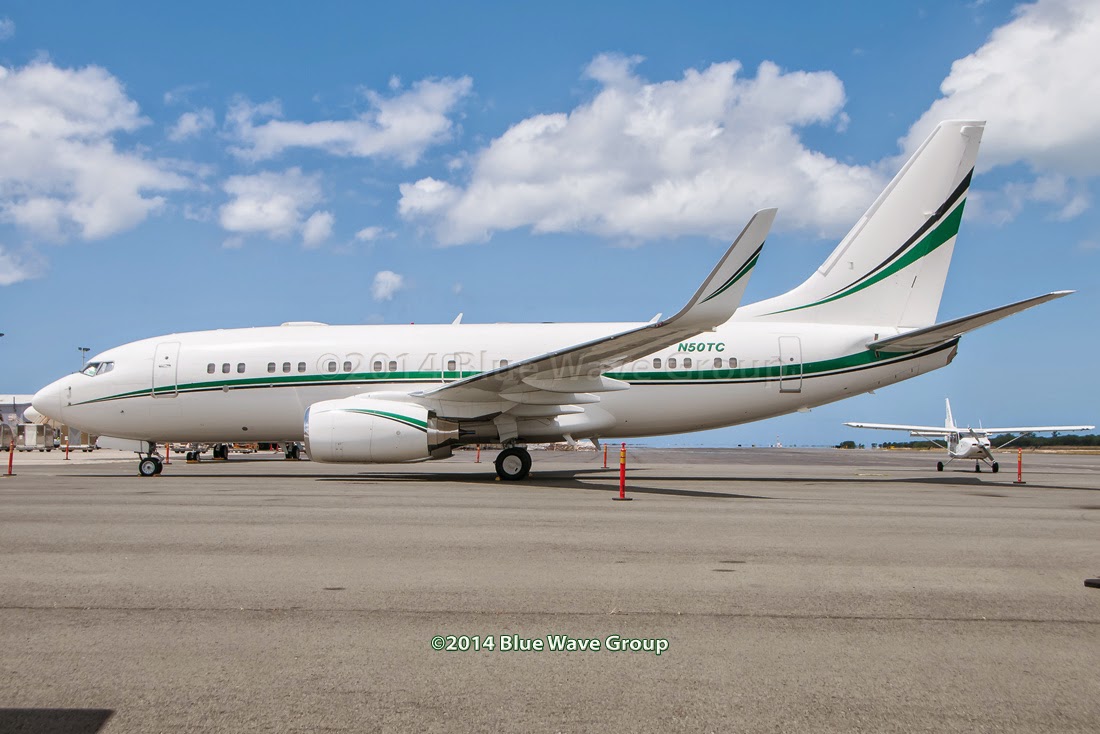 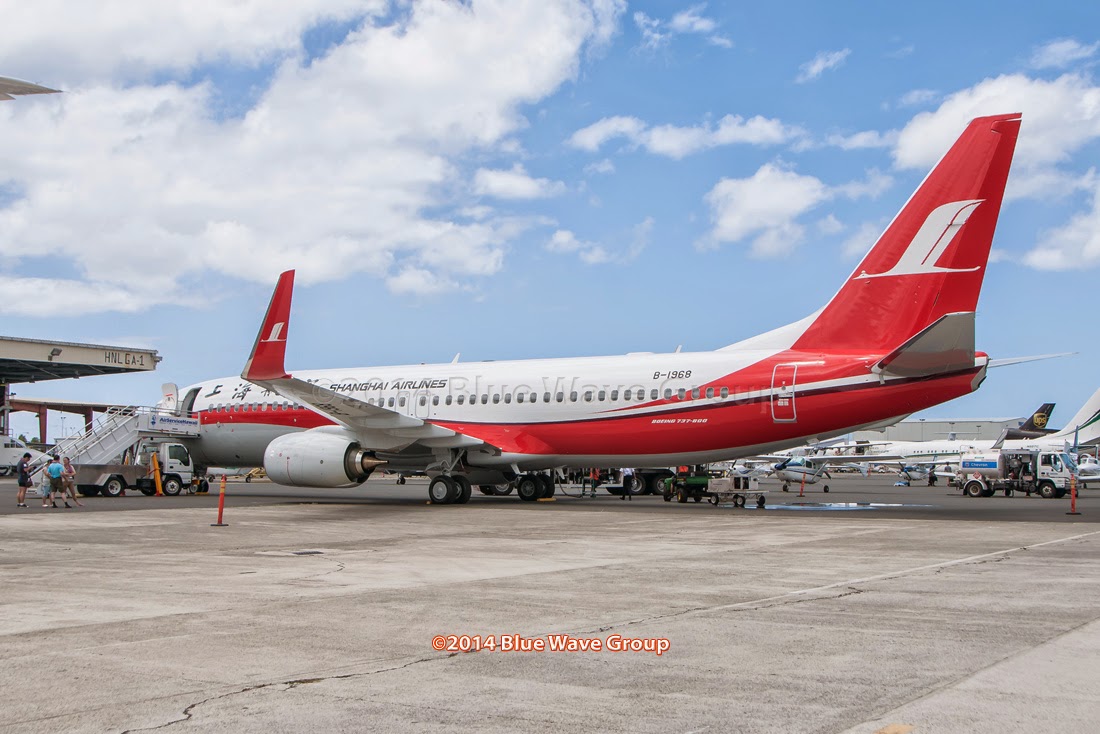 This Q300 was originally delivered to Great China Airlines [GC/GCA] in November 1997 as B-15235. It was merged into the Uni Air fleet as GCA and Taiwan Airlines merged, all under the EVA Airways ownership, in July 1998.
Posted by Blue Wave 707 at 20:14 No comments: 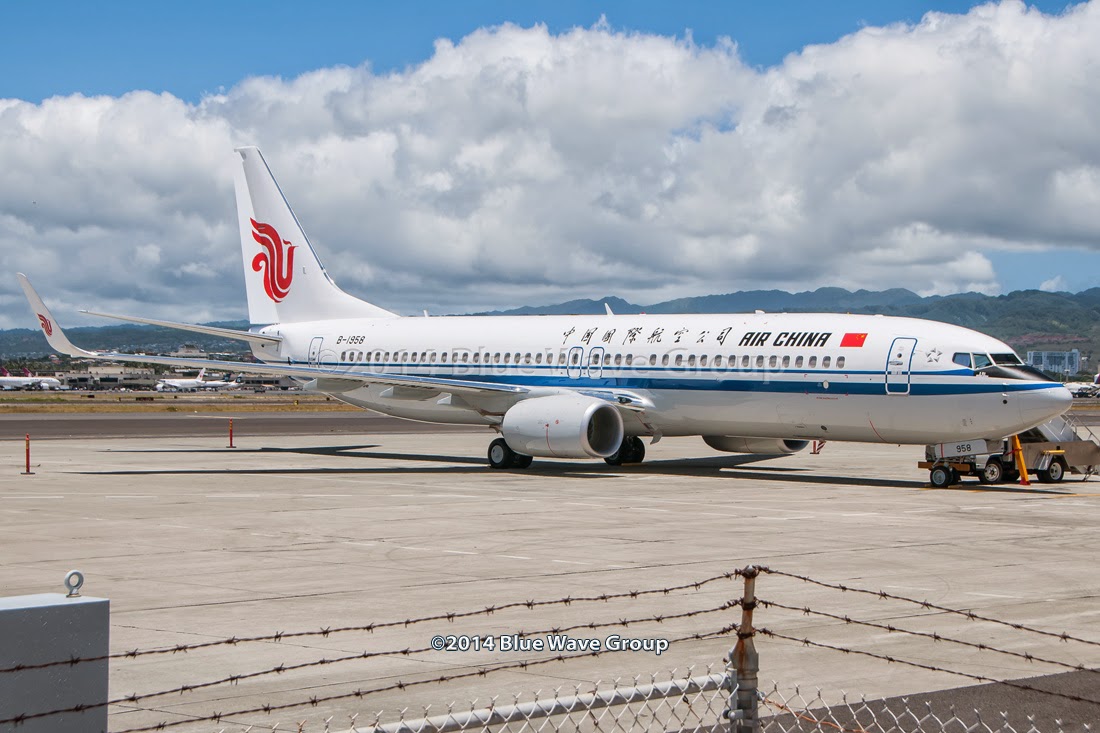 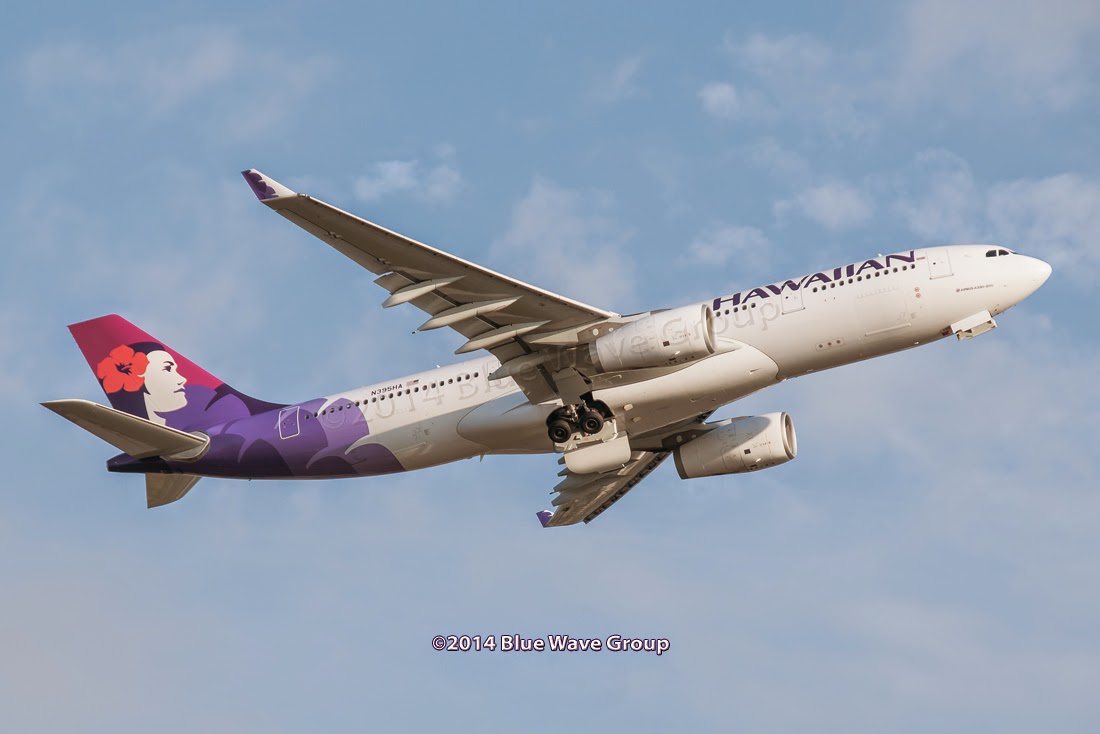 Hawaiian Airlines announced today, that beginning November 20th, they will begin four-times-weekly A330-243 service between OGG and SFO. On December 17th, the route becomes daily service.

Further information in this Hawaiian Airlines press release.
Posted by Blue Wave 707 at 10:19 No comments:

Qantas Airways announced that they will be replacing their 767-338ERs with their A330s, beginning on September 14th. Their A330s serving HNL from SYD will be a mix between their -200 and -300 series, depending on passenger traffic demands. With either A330 variant, it will be a capacity increase from the 229 seats in their 767s. The airline is also looking to up its frequency from three weekly flights to four in December.

Further details in this Qantas Group press release.
Posted by Blue Wave 707 at 07:14 No comments: 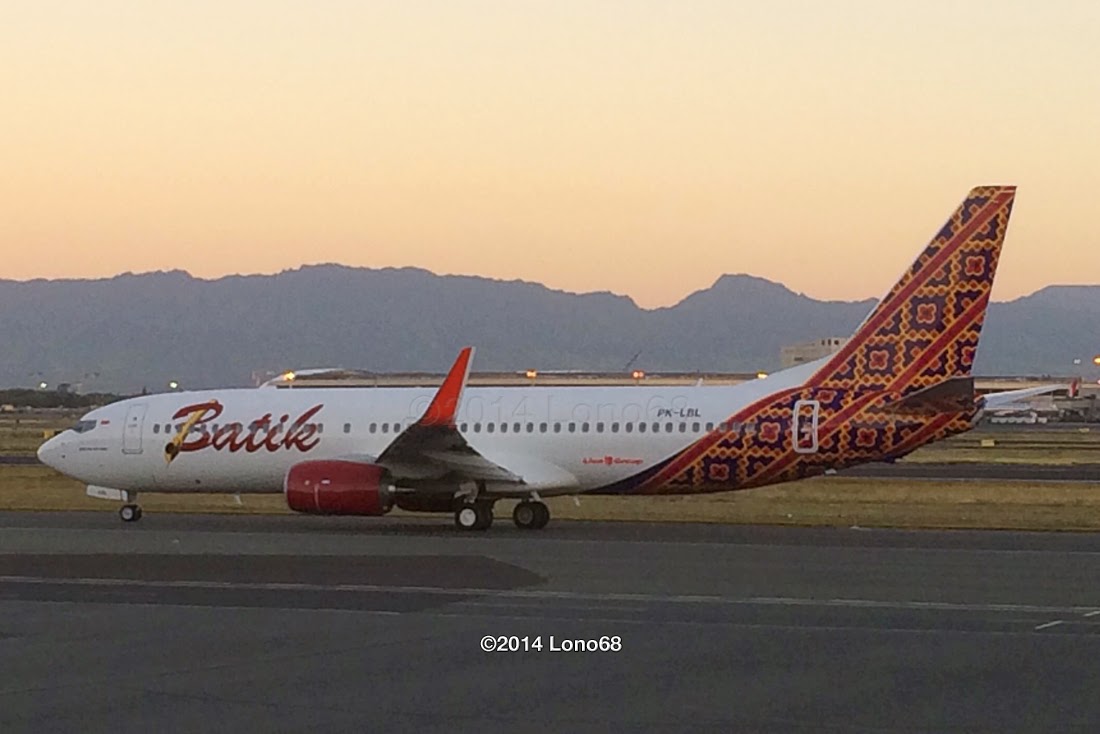 Continuing with their trend of late-night delivery flights, Batik Air is taking delivery of PK-LBL (c/n 39821, l/n 5026). The 737-8GP arrived at HNL in the early morning hours, and made its brief fuel stop, before continuing onto MAJ (above) as BTK1.

The HNL Landmark facility was originally built as Hemmeter Aviation (1980-1990), which became Century Aviation (until 2003). Bradley Pacific Aviation took over the FBO facility, and it was acquired by Ross Aviation in 2007.

Honolulu Star*Advertiser article on the closure of Century Aviation. 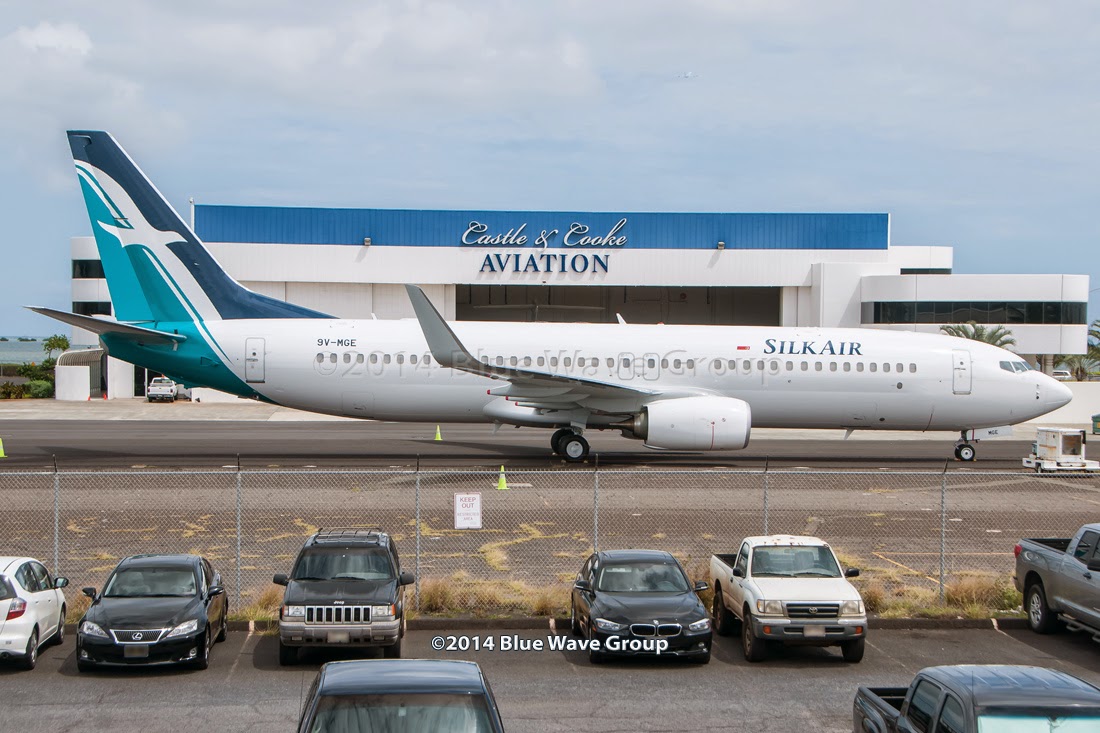 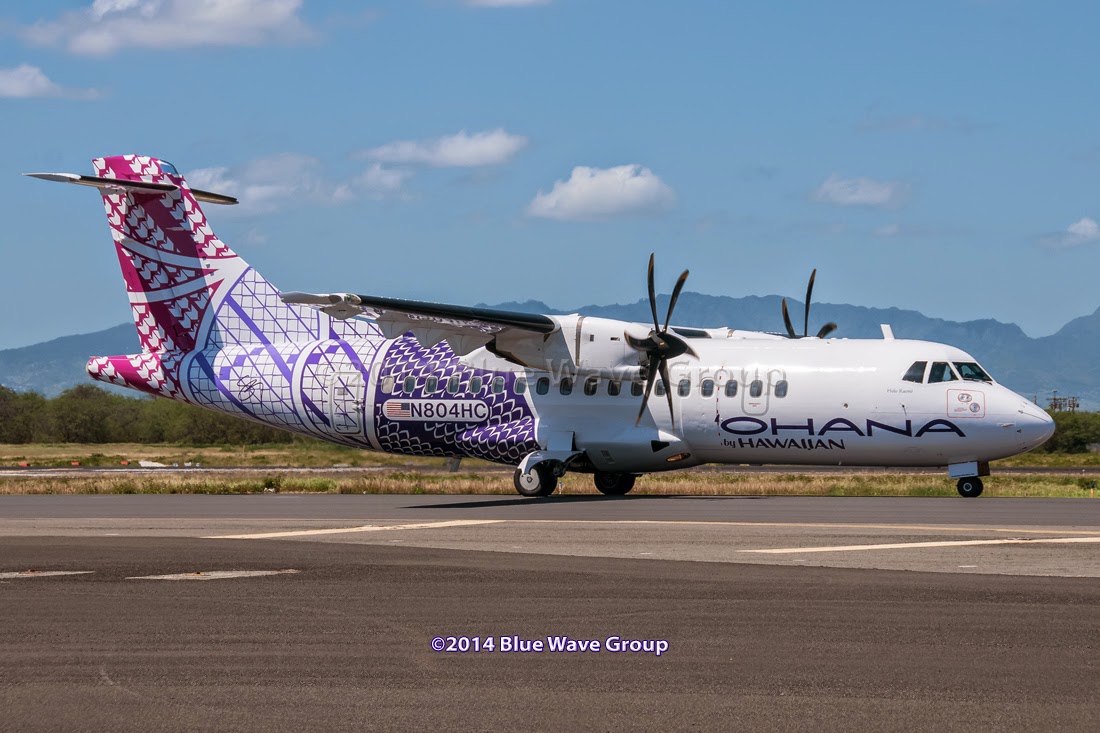 ‘Ohana by Hawaiian announced today, that they are suspending all flights for Friday, August 8th, due to Hurricane Iselle.

Further information in this Hawaiian Airlines travel advisory.
Posted by Blue Wave 707 at 18:51 No comments:

With two hurricanes approaching the Hawaiian Islands, the state is bracing for the effects of the cyclones. It appears that Hawai‘i Island and Maui will take the brunt of Hurricane Iselle, and possibly Julio as well. We are hoping and praying that both storms veer away from the islands or considerably weaken as they get closer.

For our team members, and readers on Maui and Hawai‘i Island, stay safe and stay strong.

The State Department of Transportation announced that all state airports will remain open, as each facility has their own Emergency Operations Centers. Decisions to close will be made as the storm approaches. The Airports Division asks the traveling public to only come to the airport if you have a confirmed ticket.

Both Hawaiian Airlines and Island Air announced that they will be waiving all change fees for flights booked during the timeframe of the two hurricanes.

Locally, here are the travel advisories (with up-to-date flight information) for:
Hawaiian Airlines & ‘Ohana by Hawaiian; and Island Air.

As for domestic carriers, we have provided links to travel advisories for the following airlines:
US Airways; United Airlines; Alaska Airlines; Delta Air Lines; American Airlines; and Allegiant Airlines.

For now, WestJet Airlines is the only international carrier to issue a storm-related travel advisory.

Mokulele Airlines, as well as most international carriers, have not issued any advisories.


Hawaii News Now reports that there was an incident with US Airways and a passenger trying to re-book a flight due to the hurricane.
Posted by Blue Wave 707 at 15:25 2 comments: 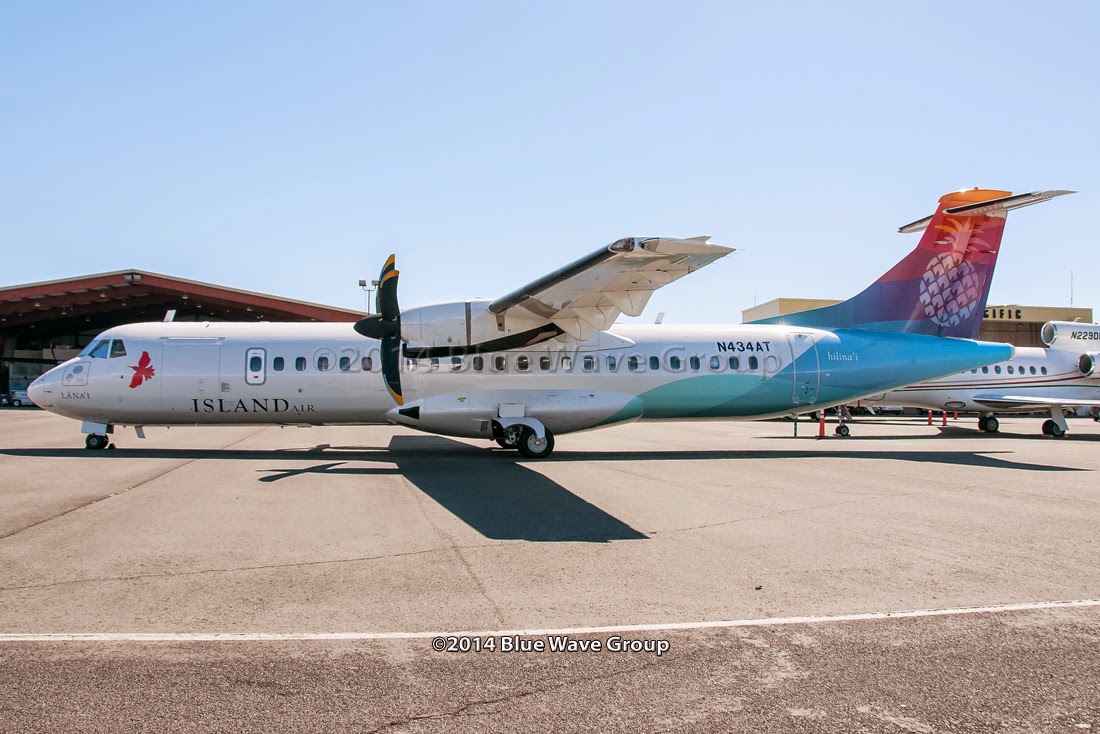 Due to Hurricane Iselle, Island Air is suspending service to OGG and LNY from HNL this afternoon, and tomorrow. Service is scheduled to resume on Saturday.

Further information in this Island Air travel advisory.
Posted by Blue Wave 707 at 07:55 No comments:

Transportation Partners Pte. (Singapore and Dublin, Ireland) is a company that is partly owned by the Lion Group, parent company of Lion Air (Indonesia), that is specializing in airliner leasing.

NOAA's G-IV hurricane hunter, N49RF, is at HNL with Hurricane Iselle and Tropical Storm Julio approaching the Hawaiian Islands.
Posted by Blue Wave 707 at 20:54 No comments: 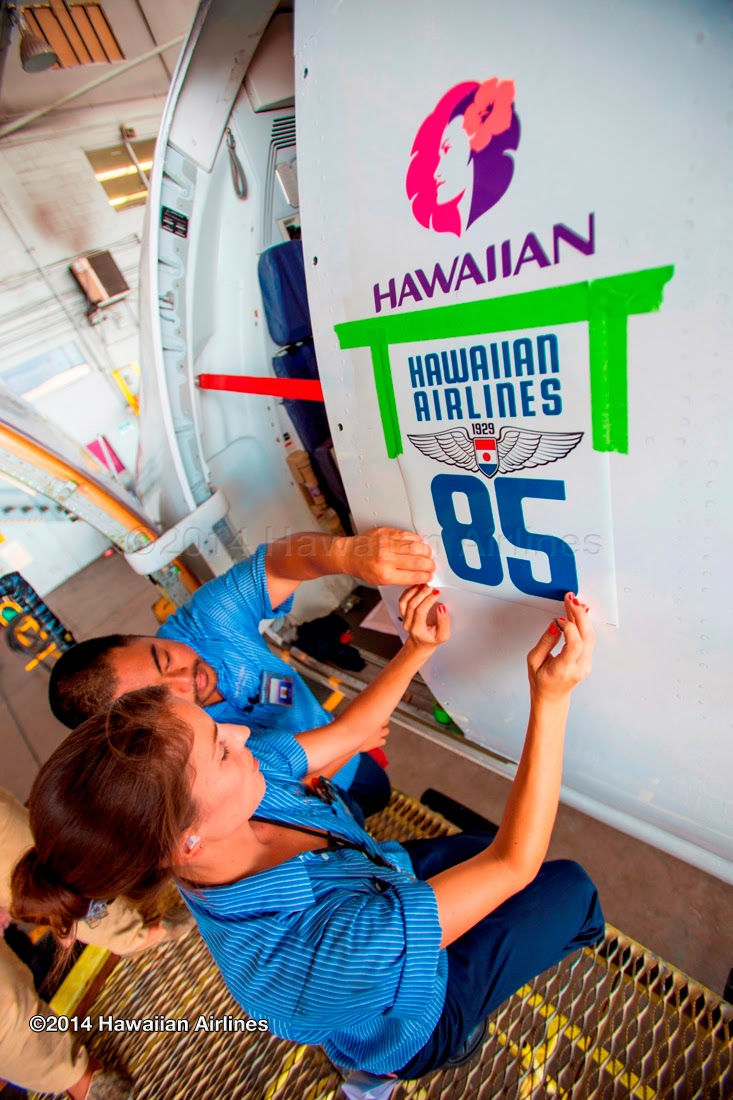 Hawaiian Airlines is adding an 85th Anniversary decal at the main entry door of its entire fleet. Pictured above, are two of Hawaiian's maintenance team applying one of the commemorative decals to one of their Boeing 717-200s.

Photo courtesy of Hawaiian Airlines.
Posted by Blue Wave 707 at 08:51 No comments: 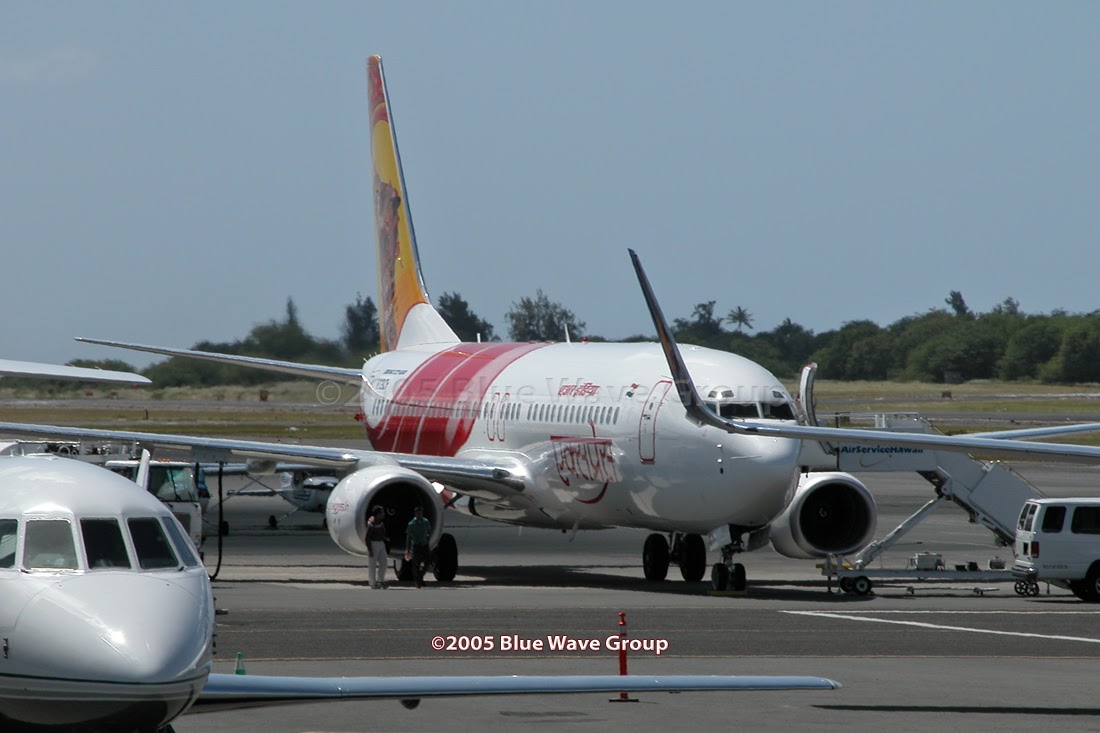 Our August edition of "HNL RareBirds Classic" features Air India Express' [IX/AXB] VT-AXA (c/n 30296, l/n 1674), as it made its delivery flight from BFI in February 2005. Of the 25 737-800s Air India Express received, the first four deliveries to stopped through HNL, while the remainder of the fleet switched to the Atlantic delivery routing. The winglet upstaging VT-AXA belongs to Chang An Airlines' B-5115.

30296 was originally purchased by Boullioun Aviation Services in February 2005, then leased to Air India Express. In April 2010, it was sold to Aircastle, then leased to Anadolu Jet [--/AJA] (Turkey) as TC-JHJ. In September 2013, it was leased to SunExpress [XQ/SXS] (Turkey), but still retained the Anadolu livery, as it operates for the latter, but registered as TC-SBF.
Posted by Blue Wave 707 at 00:41 No comments: