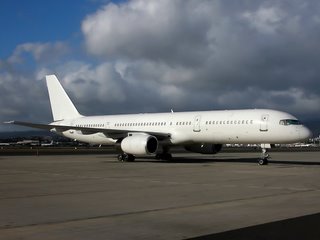 This all-white Boeing C-32B, 00-9001 (c/n 25494) belongs to the US Air Force's 486th FLTS (Flight Test Squadron) of the 46th TW (Test Wing) which is part of the Air Force Materiel Command (AFMC) based at Eglin AFB, FL. It is also used by the US State Department's Foreign Emergency Support Team. Note there are no military markings, only the "09001" registration is located under the last few rear pax windows with a US flag next to it.